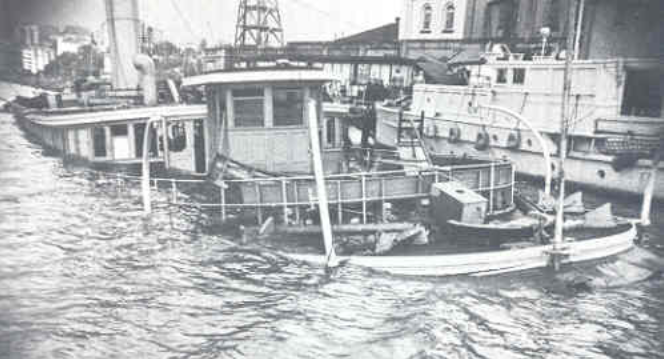 The story of the midget submarine raids on Sydney is one in which senior commanders bungled and got away with it. Meanwhile, the commanders of the small ships that attacked and sunk two of the submarines went unrewarded.

On the Sunday night of May 31, 1942, 80 years ago, Sydney Harbour was attacked by three midget submarines of the Imperial Japanese Navy. They had been launched by five large fleet submarines from outside the port. In the raid, the accommodation vessel Kuttabul  (above) of the Royal Australian Navy was sunk by a torpedo impacting nearby and 21 sailors died.

In a night of, chaos, indecision, incompetence, but much bravery, the midget submarines were counter-attacked. Two, commanded respectively by Lieutenants Chuma and Matsuo, were sunk, while another – Sub-Lieutenant Ban’s ­–­ was found outside the Harbour in 2006. It had fired its two torpedoes but had missed its target of the cruiser USS Chicago – one however had detonated near the Kuttabul.

Chuma’s boat had become entangled in the protective boom net stretched party across the harbour main channel. When attacking RAN vessels were encountered, it was blown up and sunk by its own crew members. Matsuo’s was 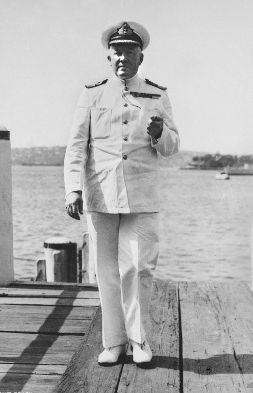 The man who allowed most of this disaster to happen on his watch was the admiral commanding Sydney: Rear Admiral Gerard Muirhead-Gould (left). On secondment from the Royal Navy, he was ironically well suited to manage Harbour defence. In 1939, at the beginning of the war, a German submarine had penetrated the RN base of Scapa Flow and sunk the battleship Royal Oak, with the loss of 835 lives. Muirhead-Gould was one of three naval officers appointed to investigate how this had happened, and how it might be prevented from happening again. His next posting was Sydney.

Despite nearly two years to prepare for the Japanese offensive, and with growing signs they were getting closer – the Battle of the Coral Sea being fought off Queensland, for example – the Admiral did little. Amongst his lapses were failing to get any practise for his small ship commanders in submarine attacks; failing to ensure they were all armed – some weren’t on the night; failing to stop the Harbour ferries from operating once the attack started, which would have made spotting a periscope much easier, and even failing to believe that there were any submarines in the Harbour at all.

When the explosion of the Chuma submarine was heard, the Admiral cancelled his dinner and made his way by launch down the Harbour to investigate. Arriving on board the same small ships which had attacked the midget, he refused to believe there was one now sunk on the Harbour floor beneath him. As he was disputing the point, the Kuttabul explosion further up toward the Harbour Bridge was heard. Muirhead-Gould never apologised to the men he had doubted, and even left the name of one of them – the commander of Lolita, with whom he had argued – off letters of commendation, the only reward the Navy men received.

His partner in incompetence was the captain of the primary target: Captain Howard Bode of the cruiser USS Chicago. Bode had actually been dining with the Admiral. It being several hours after dinner had started one must wonder how alcohol affected both their judgements. The Captain made his way back to his command, where his 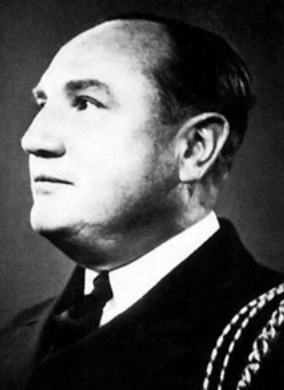 subordinates had done everything right. They were preparing the ship for sea, along with its escort, the destroyer USS Perkins. They had sighted the midget submarine attacking the Kuttabul, and opened fire at it.

Bode (right) too refused to believe there were submarines present. He told off his officers, commanded the Perkins to stand down, and ordered a signal made to Muirhead-Gould, apologising for firing in the Harbour. Once the Kuttabul explosion happened he changed his mind, and ordered Chicago to sea. On the way out of the Harbour they sighted the third submarine – but failed to attack it.

Bode later committed suicide over further being the wrong man in the wrong job. A few months later he mishandled Chicago so badly in the Battle of Savo Island that he was the only commander the subsequent inquiry labelled as doing the wrong thing. When he learnt what was in the court’s findings Bode shot himself.

Surprisingly, Muirhead-Gould was allowed to do more than just get away with presiding over the whole mess – he was lionised as a dutiful naval officer, even appearing on the front cover of the popular weekly Pix, riding a scooter to work. He wrote his own reports on the matter, and unsurprisingly emerged well. But the federal government collaborated in the whole affair, failing to order an investigation. They had done so for the Japanese carrier raid on Darwin earlier that year, and the admirable Justice Lowe produced a comprehensive document within a few months.

Another huge lapse, though, was the failure to reward valour and competence on the night by the commanders and crews of the small patrol vessels which had gone into the attack. One in particular, the patrol boat HMAS Yandra  (below), had put up a sterling fight at the beginning: chasing, ramming and depth-charging a submarine as it tried to enter Sydney Harbour. This was the Taylor Bay vessel, and significantly when it was found its torpedo firing levers were in the launch position: it had tried to attack but failed. With its equipment too damaged to continue the crew committed suicide. That the Yandra commander, Lieutenant James Taplin, and the small ship captains of the other vessels which had chased the submarine to its end were not decorated defies comprehension.

All of these commanders’ names are known. It is time they were rewarded.

Dr Tom Lewis OAM is a military historian. Attack on Sydney is his 18th book, which can be ordered here