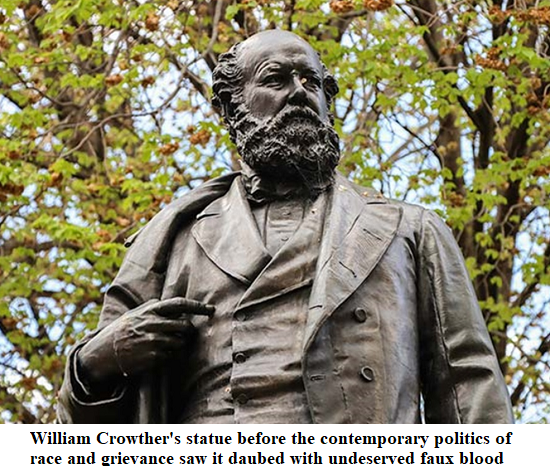 In a previous article I made the case why William L. Crowther, Tasmanian Premier, philanthropist and doctor, could well be — most likely is — innocent of the crimes and indignities he is alleged to have committed against the remains of Aboriginal man William ‘King Billy’ Lanne — accusations  that prompted Hobart City Council’s decision to remove his statue from Franklin Square.

In Defence of William Crowther, Part I

The focus of this article though, is to present an overview of Dr Crowther’s more noble attributes, inspired by his genuine Christian faith, as it were these which prompted the citizens of Hobart Town to fund a permanent public memorial in the first place. In the words of the then-premier Sir Philip Oakley as he unveiled the statue:

They were not there to judge their friend by his mortal parts—for few of them would come unscathed through such an ordeal—but they were to judge him by his immortal  part, by the many good deeds it had always been his pleasure to bestow upon those  with whom he was associated.1

Dr Crowther’s statue was unveiled on January 9, 1889, before a crowd whose size made  Macquarie Street almost impassable, and the windows of the Government offices nearby were lined with spectators. It’s inscription reads:

Who were Dr. Crowther’s friends? He did not seek them in the assemblies of great men, nor in the pavilions of the rich, but wherever pain and anguish wrung the brow, in the language of the poet Scott ‘A ministering angel wert thou’.

Where sorrow and suffering were, the skill and assistance of Dr. Crowther was ever to be found, and he taught them thereby the lesson of philanthropy. It was an easy thing to do that for which they were well paid, and which took them into the abodes of those they loved the best, but it was a very different thing to find a man of Dr. Crowther’s attainments, happiest where he did most good, and where there was the least in the shape of money to recompense him. The poor needed no memorial of him, for in their minds the name of Dr. Crowther would ever live, his memorial being in the hearts of the people.2

Dr Crowther was a member of the Church of England and a regular attendee of St. David’s Anglican Cathedral. Reverend F H Cox, a friend and ally, much admired Crowther’s work for the most wretched and impoverished. The Mercury records him as saying “he had met Dr. Crowther at the bedside of the poor, more than any other man in the colony.”3 The following, which acknowledges Crowther’s ministry to the “poor and suffering”, is an excerpt from his obituary:

One who was well known to you all, who was a regular worshipper in this church, who bore a   name honourable for its integrity in his profession and among the community in general, who will be sadly missed far beyond his own family circle, with whom many of you were in daily intercourse…

….His example of unselfishness, of devotion to duty, of doing thoroughly whatever he took in hand we shall do well to follow. He was ever ready to be the champion of what he believed to be the cause of truth and right, to defend the oppressed, to minister to the poor and suffering …

Dr Crowther was the only fellow of the Royal College of Surgeons in the colony at that time.  Following his apprenticeship with his father he travelled to Europe to complete his studies, qualifying with honours. From there he committed to a further year of study at the Hotel-Dieu and La Charité in Paris, the premier post-graduate school in Europe.  Crowther’s reputation as a skilful surgeon grew, and consequently his services were in great demand from neighbouring colonies. Alongside this, he was an active researcher and contributor to The Lancet.

Crowther took over his father’s practice.  His father, Dr William Crowther (1788-1839), had a private practice and, as a pioneer in Friendly Society work, formed the Hobart Town Dispensary and Sick Poor Society, where for 3 shillings a month members received all the attention and medicine their families and medical conditions required.

Crowther (junior) treated hundreds of people for free at his own home in the mornings before starting his shift at the Hobart General Hospital, where he worked as an honorary medical officer. He was also appointed to the Court of Medical Examiners and held the rank of Surgeon Major in the South Tasmanian Volunteer Artillery.

As a doctor, he championed the poor and disenfranchised. His patients are recorded to have remembered him for his profound sympathy and kindness, with “nine out of every ten persons [seeking] admission to Dr. Crowther’s ward, because they knew they would be well treated there.”5

Always an outspoken critic of the lack of adequate hospital funding, he continually pushed for the hospital to help the poor and advocated for it to become an independent charity supported by patients’ fees as well as philanthropic subscribers. Likewise, he advocated for the reform of the Asylum for Insane at New Norfolk. 6

Dr Crowther donated considerable sums of money to charities, community projects and similar causes. In a show of solidarity in September 1869, his friends and supporters presented him with a purse of 240 sovereigns in gratitude for his “unremitting and disinterested services in attending without charge the suffering poor of Hobart Town”.7

The Reverend H C Hancock drew attention to his philanthropic work by stating that Crowther had “through a long and honourable career given his time, his talents, and often his money to the relief of suffering humanity, with the prospect of no other reward than the consciousness of having done a good deed. It was these traits [which] … made Dr. Crowther so popular throughout the colony.” 8

Like his father, who had helped to launch one of the early resolutions in the campaign to end convict transportation, Crowther was an advocate for convicts. Initially, one of his assigned duties was to oversee the public floggings of convicts in the Murray Street Gaol, but he refused to take any part of such barbarities, and it was this refusal that ended public floggings in Tasmania.9

Due to the massive health and societal problems related to alcohol abuse in Hobart Town, Dr Crowther promoted Temperance, as this speech demonstrates:

I have long since arrived at the conclusion that if alcohol were banished from the face of the    earth, human life would be prolonged, disease would be fewer, man would enjoy life because his condition would be real, not artificial, the greatest mental and corporeal vigour would be attained, and that perfect balance in his organisation preserved, the surest safeguard against  disease in all climates, and under all vicissitudes, a balance adjusted with the greatest accuracy by an all-wise Creator; one that is so difficult to maintain under the present usages of society,      and equally difficult to restore when perverted.10

As a politician, he was known as a “warm champion of anyone whom he imagined oppressed or aggrieved” 11, and as someone who showed a keen interest in all matters affecting the colony’s welfare, particularly in those pertaining to his profession. A zealous, outspoken and articulate man, hewould no doubt have been a formidable political opponent, as acknowledged by The Tasmanian,

in political life he was the uncompromising enemy of all that he conceived to be false or shifting … a grand man, hated but respected by his enemies, beloved by his friends, and looked upon by the public as one of the people.12

Under the banner of ‘Retrenchment or Ruin’, Crowther was elected to the Tasmanian House of Assembly in October 1866. In March 1869, he was elected to the Legislative Council as a representative for Hobart, the seat he held until his death. In July 1876, he joined the Thomas Reibey cabinet as a minister without portfolio, and in December 1878 became Premier. The state of the political parties at that time made it practically impossible to do anything constructive, and so Crowther resigned at the end of October 1879.13

The Mercury reported that “to write of his political career would be but to recapitulate the political history of the colony for the last score of years”, the report noting that as a loyal and diligent politician he had been “a constant attendant in his place in the Council … the first to enter the House and usually the last to leave it, and always a patient and intelligent participator in the debates”. 14

The Lanne affair resulted in Dr Crowther’s suspension from the Hospital in 1869 without a hearing or a trial. It seems highly likely that professional jealousy — Crowther had personal enemies on the Hospital Board — and political opposition played a significant role. 15

Consequently, 1200 of his friends filed a petition to reinstate him as the Honorary Medical Officer.  At a “crowded to excess” public meeting convened in response to the petition, Dr Crowther garnered much support, including that of the Reverends Cox and Gellibrand, the latter claiming that Crowther had been made a scapegoat.16 Dr Crowther was not immediately returned to his position; but was finally reinstated in 1878.

Dr Crowther died of peritonitis at the age of 68 and his funeral was reportedly one of the largest ever accorded a Tasmanian citizen. Government offices, private businesses and hotels were all closed, while other establishments lowered blinds and raised shutters as signs of respect.  The pervasive feeling was one of great sorrow at the “old doctor’s” passing. The Mercury reported:

The procession to St David’s Cathedral passed through crowds of people, who thronged the pathways and roads, and filled every window on the line of route. To mention those who were unavoidably absent from the Cathedral would be an easier task than to enumerate those who were present, for nearly everyone was there.16

By no means has this been a thorough treatment of Dr Crowther’s life and works, but rather a snapshot of a life which was as complex and nuanced, as all human lives. Although he did not escape controversy in his day, Crowther was nevertheless a “man of his time”: engaged, resourceful and highly principled.  Those closest to him, his family, friends, and patients, knew him for his kindness and generosity.  Long-time friend, Mr Dowdell, stated that Crowther had always been “a good friend to the poor, a good father, and a promoter of morality. There was not a man here who had a greater moral character in the colony than Dr. Crowther”.17

Some concluding words are those from the Premier Fysh, who stated at the statue’s unveiling:

In all parts of the world it was customary for some memorial to be erected to men who had done great works, and performed noble deeds …  and he knew of no other name which was more respected throughout the colony (cheers) and none more worthy of being held in perpetual remembrance.18

In the words of Galatians 6:9, Dr Crowther “did not grow weary in doing good”. All these years later, is it reasonable to accept, as his modern detractors claim, that here was a man who delighted in making a tobacco pouch of a dead Aborigine’s scrotum? The answer for those prepared to look beyond the deluge of slanders currently heaped upon his good name and good works should be obvious.

7 thoughts on “In Defence of Dr. William Crowther — Part II”

In Defence of Dr. William Crowther