In Defence of Dr. William Crowther 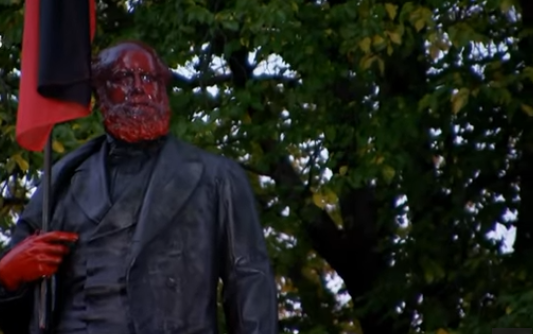 In what is the first among many more no doubt destined to be brought down, the statue of Dr William. L. Crowther— Tasmanian Premier, businessman, naturalist and renowned colonial surgeon— has been deemed “culturally unsafe” by Hobart City Council, and therefore slated for removal from Franklin Square, where it has stood since 1889.

The rationale for disappearing this tribute to a good  man is the accusation that Dr. Crowther   illegally removed the head of indigenous man William’ King Billy’  Lanne and sent the skull to the Royal College of Surgeons in London. Crowther strenuously denied the charge and was acquitted. There is no evidence to substantiate the claim and much to establish that his modern detractors have the wrong man.

Significantly, even some current indigenous groups in Tasmania have come to Dr. Crowther’s defence, albeit with rivalries amongst the state’s Aboriginal groups foremost in mind. Paul Roberts, general manager of the Circular Head Aboriginal Corporation (CHAC), has even written to the Premier of Tasmania, Jeremy Rockcliff, to demand an inquiry into “the Crowther and William Lanne skull farce”. Writing on behalf of the CHAC’s drectors, Roberts says, “the recent actions by Hobart City Council and the Tasmanian Aboriginal Centre [are an] attempt to re-write history by proffering fake historical claims.” (see editor’s note below). From CHAC’s latest newsletter:

It is important that we make it abundantly clear to the public, this is not because we support Crowther, in fact, for CHAC, our contention was never really about the statue itself, but rather about the conversations the statue evoked, and the potential missed opportunity for a public inquiry into the facts around William Lanne’s skull – the skull that the statue’s removal campaign has been centred around. CHAC have urged for a public inquiry around the constructed story about William Lanne’s skull….

That has not stopped Aboriginal activists slandering Dr. Crowther, including under the guise of ‘art’. Below, the explanatory notes beneath Alan Mansell’s work “Red Hands, Red Head” (pictured atop this page), which includes the claim that Crowther used Mr Lanne’s scrotum for a tobacco pouch. 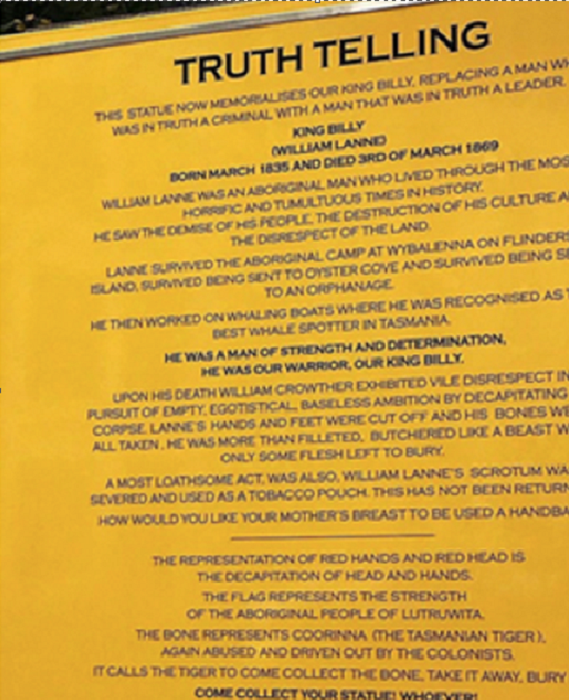 As will be demonstrated below though, everything said about Dr. Crowther in the above ‘artwork’ and elsewhere is historically inaccurate or factually incorrect. Dr. Crowther himself wrote to the Tasmanian Times explaining what actually occurred, copy of which was reproduced by The Launceston Examiner, on Thursday the March 11, 1869, and can be viewed here via Trove.

First, while Dr. Crowther did seek the acquisition of an Aboriginal skull—for scientific examination—rather than exhibit “vile disrespect”, he did so through official channels. As he explained:

The statement made by him [Crowther’s opponent, Dr. Stokell] to the effect that the body was mine and the Colonial Secretary had given it me, and that I would have it, is untrue; for up to that time no communication had been received from the Colonial Secretary in reply to an application made by me, on Thursday, in which I requested the body of Lanne for the museum of the Royal College of Surgeons.

Dr. Stokell says he looked into the coffin and saw that the skull of Lanne had been removed and another substituted … before I left the dead-house [morgue], curiosity induced me to look at Lanne in his coffin,  who to all external appearance was perfect in every respect; such mutilations as cutting off hands and foot, and opening out of the head, really took place at the hands of Dr. Stokell, and were, to say the least of it, offensive to decency, totally uncalled for, and done for the purpose of creating sensation.

For many, even Dr. Crowther’s desire to acquire an Aboriginal skull is reprehensible. But it is important to understand the original historical context. This was an era characterised by an upsurge in scientific fervour and interest in the morphological and anatomical investigation of the Australian Aboriginals, in direct response to the publication of Darwin’s Origin of the Species in 1859. Dr. Crowther was not some kind of white supremacist, but a godly man of genuine scientific enquiry. We may well think differently today, but to judge Crowther’s actions by contemporary standards is to be guilty of heedless ‘presentism’.

What Dr. Crowther records happened next makes for riveting reading and is worth reproducing in full:

It may be asked, what took myself and son to the dissecting-room at that time in the evening? The reply is simple. My son dissects the greater part of the day, and when a difficulty occurs or  any special piece of anatomy requires demonstration, I frequently give him my assistance for     half an hour, or an hour, as these as may be.

The latter was the purpose of our visit on Friday evening. As it has been almost officially stated   that the person who disinterred Lanne’s body had the head also, I at once accept the proposition, and shall proceed to its elucidation.

On Sunday evening, I was informed that a wheelbarrow containing a sack, in which was something very heavy, was seen at midnight to proceed up Argyle Street, and thence to the    General Hospital. On Monday, I went to the hospital, and in the yard, saw the wheelbarrow, in the presence of Mr. Seager, covered with blood. Information so far having proved correct, I at once surmised that the body had been taken upstairs into some portion of the old, unused female hospital, whither I proceeded, as will be presently shown.

I shall show where Lanne’s body was taken to on Saturday night ; who worked at it through a great part of Sunday in order to destroy, as speedily as possible, all traces of its identity; that it was not brought to the dead-house or dissecting-room, but secreted in a part of the old female hospital, at the back of the premises, where it remained locked up, until I challenged the superintendent and dispenser of the hospital this morning upon the subject, who, when taken by me to the room in which it had been lodged and cut up, either could not or would not find the key.

That the body was clandestinely transferred to another part of the promises between my visit to the hospital this morning and three p.m. this afternoon. I am under the impression that an order was obtained from the Board of Management to exclude myself and son from the  hospital to enable the authorities of the establishment more effectually to deal with the body, its ‘locus in quo’ having been discovered.

That the body upon its removal from the grave must have been quartered, as I tracked it upstairs in the old female hospital by large stains of blood, although a man was busily employed in washing them out. I asked the man if the remains of Lanne were in the room, and if they had   been working at the body on Sunday. He unhesitatingly replied in the affirmative. I was told by an eye-witness that the house-surgeon was employed there the greater part of Sunday in removing the flesh and sending it away.

Upon the receipt of the Colonial Secretary’s letter I requested Messrs Propsting and Morley to accompany me to the Hospital, as I believed I could show them the remains of Lanne. Upon arrival at the Hospital the gates were barred and admission was denied me. I sent for Mr. Seager, and as the honorary medical officer demanded admission, which was complied with. I proceeded to the room where the body of Lanne had been taken, accompanied by Mr. Nichol, the builder, and requested that it should be opened in his presence and that of the Police Officers.

Dr. Stokell by this time arrived, and he refused to open the door, stating that it was the Colonial Secretary’s order that the room should not be opened upon a demand made by me. I told him  that if he did not open it I would speedily do so for him and taking a hammer I drove in one of  the panels, entered the room, and there discovered a complete charnel house; the bones had been removed, but mess of fat and blood were all over the floor and upon a large box which had been used as a table. In fact, the stairs; landing, and the room gave evidence of the hurried and indecent manner in which the remains had been disposed of.

I think, after what has just been stated, a fair inference exists that he who removed the body knew something of the head also.

According to the Tasmanian Times the skeleton is now in the possession of the Secretary of the Acclimatisation Society (Mr. Graves), with the full knowledge and consent of the Government. The more the circumstances are considered the more clearly will it appear that the Government and the Hospital authorities have connived throughout at the mutilation of the body and the plunder of the grave for the benefit of the Royal Society. If any other explanation can be offered let us hear it.

With so much talk about ‘truth telling’, especially when it relates to the history of Australia’s Indigenous Peoples, it’s crucial we seek to understand the truth from both sides. Significantly, Tasmanian Premier Jeremy Rockcliff has stated:

However, as a Government we do not believe history should be erased, but rather learned  from. In that vein, I am confident there will be opportunities to discuss how we achieve this respectfully.

The Circular Head Aboriginal Corporation’s call for a special inquiry is needed now more than ever before. If the Premier is really committed to the truth, then we have nothing to fear and everything to gain. Dr. William Crowther may well be — almost certainly is — innocent of the crimes for which he has been so slanderously accused. If so, then perhaps even a public demonstration of saying ‘Sorry’ might also be in order.

NOTE: There is more to CHAC interest than a noble concern for an ancestor’s remains, as explained on page 4 of the organisation’s latest CHAC newsletter:

This unidentified skull, under the falsehood of being Lanne’s was buried in a highly secretive ceremony somewhere near the Arthur River in the early 1990s.

Our concern, is that with the Lands Act currently under review (see last edition for more details), we could find ourselves in a position that Hobart-based, Tasmanian Aboriginal Centre, establishes links due to this burial site, and thus potentially gain control over North West lands.

11 thoughts on “In Defence of Dr. William Crowther”

Anything but an Ordinary Seaman