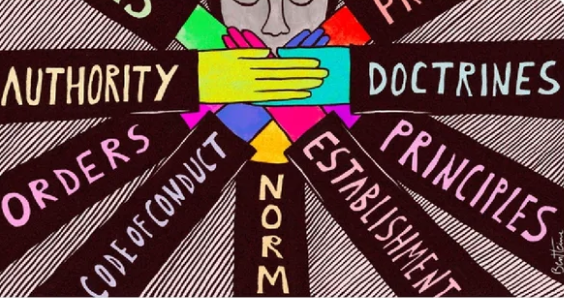 At the risk of seeming self-obsessed, I would like to share with readers the latest installment of my adventures in Wikipedialand.  I have been blocked as an editor and have appealed my sentence.  What follows, while it might seem trivial, comes with a larger and more important message: conservatives are losing the big battles because we are too easily concede the little ones.

Let me begin by pointing readers to the previous two recountings of my battles with the gatekeepers who have made what should be an invaluable resource into a collection of authorised leftist narratives and, with few exceptions, only leftist narratives. ‘Something Wiki this Way Comes‘ begins the saga, with ‘Tell the Truth, Get Wikiwhacked’ the second installment. What follows are e3xcerpts from the subsequent to and fro.

Before that, however, I draw readers’ attention to Wikipedia’s pleas for donations and hope that any tempted to dig into their wallets will think twice. Wikipedia’s stated goals are noble — the free and frank relaying of information, with group consensus shaping the final product via discussion and agreed-upon revisions. The thing is, though, you can’t have anything resembling a reasoned debate when those in charge apply the gag to opinions and hard facts that don’t match their ideology.

As background, I wrote a book, Bitter Harvest, critiquing Bruce Pascoe’s Dark Emu, which can be ordered here.  In late 2020 I noticed that the Dark Emu section in the Wikipedia article on Bruce Pascoe lacked a reference to my critique, so in my naivete and ignorance of Wikipedia protocols, I added this entry under the handle ‘Petro Antonio’:

Pascoe’s claims in Dark Emu have been challenged in a 2019 book by Peter O’Brien, ‘Bitter Harvest – the illusion of Aboriginal agriculture in Bruce Pascoe’s Dark Emu’, published by Quadrant Books.

I was very quickly made aware that my addition violated Wikipedia protocols, for which I apologised and requested in the article’s Talk page that my edit be reinstated.  Here are highlights of the discussion that ensued:

Bacondrum: Peter O’Brien is not a subject matter expert, the book was panned/sold poorly, poorly received by academics and published by an unreliable source of which Peter O’Brien is also a regular contributor. You have a serious conflict of interest issue which has not been declared and you should not be editing this article.

Petro Antonio: I did not write ‘about’ my own work. I simply pointed out its existence. My book has sold out its first print run and I invite you to identify who has panned my work

and on what basis.

Petro Antonio: Bacondrum, it seems to me that this article is deficient in that it fails to mention the existence of a serious, well-researched 300-page book rebutting Pascoe’s claims. It should not matter whether it is me or someone else who rectifies that omission. However, since you did not know I was the author at the time you first deleted my contribution, it is clear that the real reason you objected is because the book is published by Quadrant. Regardless of your personal ideology, Quadrant is a serious and successful publication that survives without any help from the public purse and represents the views of a significant portion of the Australian populace. —

At this point, editor HiLo48 piped up in support of Bacondrum, his claim being that, as his crowd had decreed Quadrant “unreliable”, it must therefore be, er, unreliable. Arrogance, anyone?

HiLo48: Quadrant is not regarded as a reliable source for Wikipedia content in general … In addition, it’s credibility on this topic was extensively discussed on this Talk page before. It really does seem to be a waste of time to be discussing this again. –

At that point I decided to let it go, having been polite, forthright and restrained.  My proposed entry was a simple statement of fact objectionable to Wikipedia editors only on the grounds that it was inserted by me and that I write for Quadrant.  But I decided the issue was not worth pursuing.  However, at that time I also thought to check the Talk page of the Dark Emu article and discovered that there has been further discussion of Bitter Harvest. — if ‘discussion’ is taken to mean spleen, vitriol and ad hominem assaults. Here is a sample of what I read:

Bacondrum: There’s a general consensus that ‘Bitter Harvest: The illusion of Aboriginal agriculture in Bruce Pascoe’s Dark Emu’ is a hatchet job, a stridently biased work with an agenda, it’s not reliable, views expressed are fringe – it’s an attack piece. It is published by Quadrant. Peter O’Brien has dedicated a lot of time to writing defamatory and deranged attacks on Pascoe in Quadrant, such a vitriolic and stridently biased punter cannot be considered for inclusion

Bacondrum: Bitter Harvest hasn’t been refuted because no one takes it seriously enough to bother…… —

HiLo48: The “substantial criticism” is all from the same tiny group of mostly discredited and unethical liars ….. Straw man arguments like that are used by people without a decent argument against what is actually being claimed. Stop wasting our time here using the claims of bigoted liars and professional racists to defend your own ignorance and hatred.

HiLo48: There is no objective evidence that Pascoe mishandled sources. Every critical article saying such things includes bullshit from discredited sources. Any new content in such articles is therefore also questionable. …..

Bacondrum: I think that would be giving undue weight to fringe views. Where else have these criticisms been raised? If O’brian [sic] is the only one who has raised them then they are next level undue and fringe. Who is O’Brian? Nobody, at least not as far as publishing his criticism here is concerned. If I write a book about how shit I think Tony Abbott is, should that be added to his article? How is O’brian any more of an authority than the next punter? No way.

Bacondrum: Despite the overwhelmingly positive response, the many awards and accolades this work has received, I’m okay with the inclusion of mainstream criticisms from reliable sources – but not Quadrant… Who publishes Bitter Harvest: The illusion of Aboriginal agriculture? Quadrant, an unreliable source. How many units has Bitter Harvest… sold? Hardly any … The inclusion of this poorly written, unpopular, stridently biased, unreliable attack piece is not on, it is massively a blatant hatchet job produced by an unreliable source that’s barely sold a few dozen copies. I’ll fight its inclusion with all means available.

… I can see the argument for including Bolt and Cashman’s criticisms, but not O’Brian’s – they are the unhinged rantings of someone with no expertise on the subject … That barely readable rant and its obscure author are fringe and deserve no mention, IMO.

Naturally, I was stung by this attack and so I wrote the two articles linked above.  After that I left the matter lie fallow until February 2021, when I became aware of the existence of a well-researched paper by anthropologist Dr Ian Keen who also has critiqued the central theme of Dark Emu. So I joined the efforts of some other editors, a very few, to have mention made of this paper in the Dark Emu article. You can read the substance of this discussion here  I proposed the following amendment:

The central premise of Dark Emu viz that Aboriginal people were essentially sedentary agriculturalists rather than nomadic hunter/gatherers, was challenged by anthropologist Dr Ian Keen, in a paper entitled “Foragers or Farmers: Dark Emu and the Controversy over Aboriginal Agriculture” published in the journal Anthropological Forum in January 2021″.

Once again, this is a simple statement of fact, objectionable only on the basis that it was proposed by me.  Having received no substantive objections to this proposal from other editors, I posted it.  It was almost immediately removed.  I then proposed an even more anodyne version:

The evidence that Dark Emu offers in support of the extent of pre-colonial Aboriginal agricultural practice has been challenged by anthropologist Dr Ian Keen, in a paper entitled ‘Foragers or Farmers: Dark Emu and the Controversy over Aboriginal Agriculture’ published in the journal Anthropological Forum in January 2021. Keen argues that the evidence has been exaggerated and that the designation ‘hunter-gatherer’, that has traditionally been used to describe Aboriginal society, is appropriate.

For my pains I was ‘indefinitely blocked’.  And yet today the article includes the following paragraph:

Anthropologist Ian Keen has argued in the journal Anthropological Forum against Pascoe’s thesis that Indigenous Australians practised agriculture. He concluded that “Aboriginal people were indeed hunters, gatherers and fishers at the time of the British colonisation of Australia”, although acknowledging “the boundary between foraging and farming is a fuzzy one.

So it is clear that I and Austhistory99, who supported me, were quite justified in our efforts.  The only difference was that we are depicted by the hateful intolerant Left as representing the ‘hateful racist Right’.

Oh, and by the way, Dr Keen, newly embedded in the Dark Emu article, states

Many critiques of Dark Emu have come from the political right. They include the writings and broadcasts of Andrew Bolt; articles in, and a book published by Quadrant magazine (Peter O’Brien), whose editor Keith Windschuttle engaged extensively in the ‘history wars’; and the Dark Emu Exposed (Anon. 2020) as well as the Quadrant online (quadrant.org.au) websites (sic). Unfortunately, in my judgement these critiques of Pascoe’s treatment of his historical sources are largely correct. 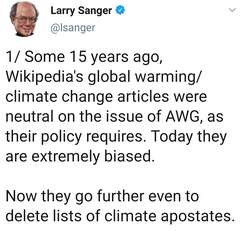 Editor Bacondrum is opposing my re-instatement as an editor on the basis that my conduct has been ‘appalling’.  I will leave it to more objective editors to decide whose conduct has been appalling. Quite some time has now passed and I have received no further communication, so I assume the Wiki gnomes are just waiting me out.

However, news has just come to hand that co-founder of Wikipedia, Larry Sanger, has had enough of Wikipedia’s ‘Leftist bias and propaganda’  and is moving to set up a truly, independent and free speech alternative. Strength to his arm! Like everything the Left infiltrates, subverts and conquers, Wikipedia has been made not merely useless as a reliable source but intentionally and grossly misleading. That the laughable likes of bush league sophists such as Bacondrum wield a corrupt censor’s blue pencil with impugnity says it all.