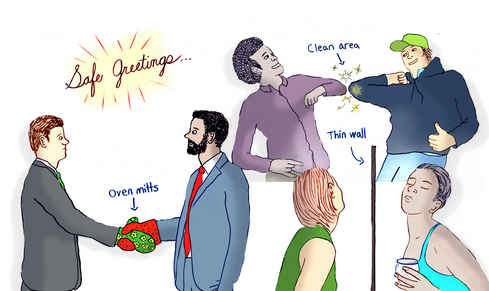 One of the hideous things to come out of the COVID-19 pandemic is the open or de facto imposition of conforming behaviour. One example is what is, in effect, the ban on  shaking hands, replaced with the bumping-of-the-elbows ritual that has now invaded our everyday existence when greeting or meeting people. Politicians of all stripes are proudly bumping elbows when visiting factories, welcoming visitors, or meeting people in the street, with the most courageous fist-bumping, but shaking hands is now regarded as a revolting and potentially dangerous practice. The bumping-of-the-elbows ritual has  been embraced as the preferred and politically correct way to greet people.

History reveals that conforming behaviour can easily be foisted upon people, even when not legally imposed. In Nazi Germany, for example, people were effectively compelled to greet each other with outstretched arms and Heil Hitlers. Of course, Germany was a dictatorship, but the difference between a dictatorship and, supposedly, a liberal democracy is one of degree because the expectations of conformity are largely the same, even if their enforcement differs.

As the spread of the COVID virus in Australia has been arrested by intermittent lockdowns and the closing of internal borders, rigorous contact tracing, and by carefully vetting, restricting and quarantining international arrivals it should once again be possible to greet others in the normal way. But our knowledge reveals, and experience confirms, that this expectation is possibly fanciful and misplaced. Indeed, when you offer your hand to welcome or greet guests or acquaintances, many people will refuse to shake hands and tell you they are not allowed to do this anymore. It is not as if they have been ordered not to shake hands; it is more a matter of expecting to conform to new standards that our policymakers and trendsetters have settled on and have effectively and successfully imposed on the majority. The conformist mindset is, if you will, another transmissible virus!

The ubiquitous handshake probably originated in the 5th century BC in Greece. Initially, it was meant to confirm mutual disarmament. The bumping-of-the-elbows ritual, as demonstrated daily by members of the political class, is a comical ritual, one that popped up like mushrooms in a meadow after a rainy night.

This new ritual, arguably, is indicative of the growth of a rapidly spreading culture of distrust that is visible in even the most mundane human activities. A simple example will suffice to make this point. A weekend visit to a farmer’s market is one of the pleasurable activities in Australia that is still largely unregulated. A few weeks ago, intending to visit a market, I parked my car in a side street and walked up to the market, some 500 metres away. When I exited the market with my arms full of cauliflower, broccoli, meat products, fish, and honey, I took a wrong turn and arrived on an unfamiliar street. So, I asked a few people walking their dogs – another favoured Australian pastime – how to get back to the street where my car waited. When they professed never to have heard of the street, I entered a few shops and asked the attendants to point me in the right direction. However, nobody was able to help me, and they all avowed not to know what I was talking about. The closer people lived or worked to the street, the less I found they knew of its existence! Most people from whom I sought directions claimed not even to know there was a market on Saturday mornings.

There are two explanations for this bizarre outcome: first, they genuinely did not know – the employees in the shop may have come from other suburbs – or, more likely in my view, they simply did not want to get involved in even the minor problems of another. The latter explanation points to the nurturing of a culture of conformity: by not getting involved and practising social distancing, thereby creating barriers between people, it is hoped to avoid unpleasantness, including COVID infections and other afflictions.

If this story resonates and you have experienced similar treatment, I invite you to extrapolate this example. Governments and legislatures of different stripes all over Australia are adopting the most outrageous laws which accord with their left-wing agendas, but nobody is doing anything about it, because the expectation of conformity does not promote dissent. As we saw recently in Victoria, when Parliament adopted the Change or Suppression (Conversion) Practices Prohibition Act 2021, even the opposition abstained, rather than express vociferous dissent. The oppression and repression are so hard-fisted that most people, including politicians, do not dare stand up for values which arguably promote decency, prosperity and are necessary for freedom to exist. The oppression of the left prevails, even to the extent that good people do nothing, fearful of violating the expectation of conformity. Edmund Burke, the 18th century politician and philosopher famously said that, “The only thing necessary for the triumph of evil is for good men to do nothing” is apposite here. Even when conservatives come to power they don’t remove the social engineering legislation of their predecessors. In this regard, conservatives can learn from President Biden who, armed only with a pen, misguidedly and with revenge at the fore managed to unceremoniously obliterate the admirable legacy of President Trump.

In Australia, as in most liberal democracies, we tolerate a mountain of social engineering legislation which sees freedom of speech only marginally more protected than in the People’s Republic of China. This tolerance of restrictions is mostly due to a desire or expectation to conform with the edicts of our ruling elites. For the time being, I am still allowed to write this article. However, its content may be barely tolerated by those who insist on conforming behaviour. In the absence of vigilance, their insistence could be transformed into total control and suppression, lurking around the corner, like a beast of opportunity. That opportunity has presented itself: its name is COVID and it has spawned a tyranny of conformity.

Gabriël A. Moens AM is an Emeritus Professor of Law at The University of Queensland, and author of a novel on the origins of the Covid-19 virus, A Twisted Choice

9 thoughts on “COVID-19 and the Tyranny of Conformity”

Nothing to Lose but Chains and Shame