Painting the Near Future in Blackouts and Green 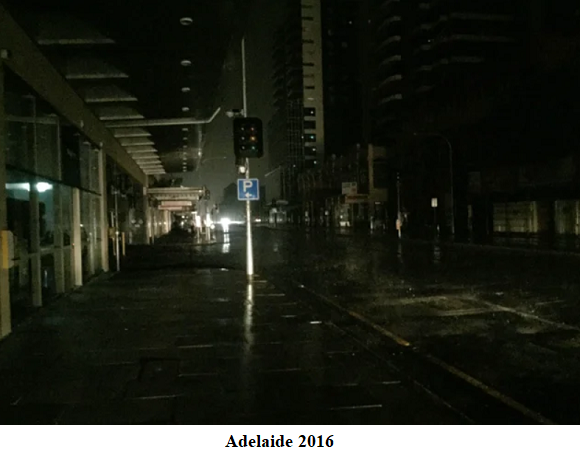 The other day Chris Bowen, minister for a contradiction in terms (namely, climate change and energy), stood on the Gippsland shores surveying Bass Strait, imagining offshore wind turbines so far as his eyes could see. And, following Die Hard‘s Hans Gruber’s take on Alexander the Great, when he saw the breadth of his domain, he wept, for soon there would be no more fossil fuels left to axe. Poetic embellishment aside, that pretty well sums up the single-minded maniacal intent of Australian governments, federal and state, to entirely replace power sources which are reliable, constant and dense with those which are unreliable, intermittent and diffuse. What could possibly go wrong?

At this festive time, the new year beginning, it is salutary to recall the grand schemes in train to rob us of the energy security that our fathers and, for some, grandfathers took for granted. I know my dad had confidence when he switched on the lights that they would indeed come on. His only concern was that his two children, including me, tended to leave them on when leaving the room.

It’s pie-in-the-sky of course. Neither the manpower nor materials will be available. For example, does Bowen know where the special ships will be sourced to plant turbines in the sea? Reportedly, there is a world-wide shortage. Has account been taken of incipient objections to offshore wind farms by fisheries and wild-life aficionados? Has he assessed the increasing environmental (NIMBY-style) objections to onshore wind and solar farms. It’s a delicious irony that environmental lawfare will be coming for renewables. Then there’s the transmission infrastructure, and the environmentalists don’t like that either as it traverses pristine landscapes; disturbing the habitats of our wonderful native species.

AEMO again. It estimates that 13,200 kms of high-voltage transmission lines will be required to interconnect the National Electricity Market – the South Eastern grid. How many large ugly pylons does that require? I don’t know; maybe 30,000 or so. Most of them to be built on cleared landscapes or on someone’s land. Imagine how much pain and cost that will entail. Expect governments to eventually force landowners into compliance as reliable power sources are abandoned and demolished and the promise of a clean-energy utopia turns sour. That will be just one facet of the dystopia to come – an inevitable outcome of governments turning to the tenets of socialism in order to impose hardships on their subjects-cum-vassals.

Take the recent imposition of a twelve-month price cap on natural gas with the accompanying portent of regulations to ensure producers charge “reasonable” prices in the future. Straight out of the communist Eastern European playbook. It’s just one sign of things to come. Best to remember that capitalism, freedom and prosperity occupy a small part of human history. Socialism and tyranny are always in the wings. This climate scam, to which sadly most of the Australian population are willing fellow travellers, is a gangplank to the dark side.

If you think 13,200 kms of transmission lines is a pipedream, how about 28,000 kms. This, according to AEMO, will be required if Australia becomes a “green hydrogen superpower.”  At this point pipedreams becomes so stretched that words fail. Fools’ paradises will have to do. Take the planned green-hydrogen project northeast of Port Headland, the Asian Renewable Energy Hub. A 26GW project designed to produce ammonia from green hydrogen for export around the world. Envisaged is 6,500 square kilometres of wind turbines and solar panels, a desalination plant to produce sufficient pure water to support electrolysers on a vast industrial scale, supplemented with an industrial process to convert the hydrogen produced to ammonia, for safer transport. Now imagine many such implausible schemes to fulfill Australia’s destiny of supplying green hydrogen to the world. World domination, no less. Move over Fu Manchu.

All the while, as scheming to blanket the country with renewable energy moves way ahead of practicality and reality, actual reliable base-load power sources are being decommissioned and demolished. Liddell next year, Eraring in 2025, Yallourn in 2028, Loy Yang A in 2035; and, bet your life, more closures will be brought forward. Australia will run out of power. Blackouts will ensue. Don’t worry governments have smart meters up their sleeve.  These will become compulsory. They will allow the powers that be to monitor your electricity usage and to cut off those whose social credit score is not up to scratch. In renewable-energy newspeak, it’s called demand management. You’ll find it in the AEMO report.

Oh, this will never happen, some might say. What, the same healthy people who obediently complied with orders to stay at home because of a mild pandemic that seriously affected only the old and sick. Governments learnt a lesson from that. They now know what servile sheep their populations are. Just waiting, wanting, to be told what to do. Please keep us masked, isolated and jabbed repeatedly with experimental vaccines.

Finally, to cap it off, as it were, we have the so-called Capacity Mechanism, which is supposed to bridge the transition from reliable fossil-fuel power to unreliable wind and sun power. The Energy Security Board (ESB) stupidly thought that gas and coal would play a part. After a good thrashing for being heretical, the ESB lost carriage of the Capacity Mechanism (in August). Now it’s with the states which, in Monty Pythonesque style, think that unreliable wind and sun should either be firmed with unreliable wind and sun, or with sources of power like batteries which are seriously inadequate, or with not-yet-built pumped hydro, or with not-yet-invented affordable green hydrogen. Weep, for we are in the hands of idiots who will turn despotic when their crackpot plans unravel.

Sorry, forgot. There’s the forecast, commissioned by Labor from RepuTex Energy – you know the crowd that projected electricity prices would fall by $275 by 2025 – which has 3.8 million electric vehicles (EVs) on the road by 2030 and 3.8 million households with EV charging points. Yes, those in charge are idiots. But, really, can they not do simple arithmetic? My back-of-the envelope calculation shows (explained here) that EV sales would need to form about 37 percent of all new car sales each year from now until 2030 to reach 3.8 million. As it stands, the Electric Vehicle Council reported in October 2022 that just 3.4 percent of new car sales are EVs. It’s good job. As I understand it, electricity is required to run EVs. And that will soon become a scare commodity. Store up candles, woolly underwear.

31 thoughts on “Painting the Near Future in Blackouts and Green”

Farce on the Reef

It’s all Greek to a Warmist