Is There Nothing Matt Kean Can’t Do! 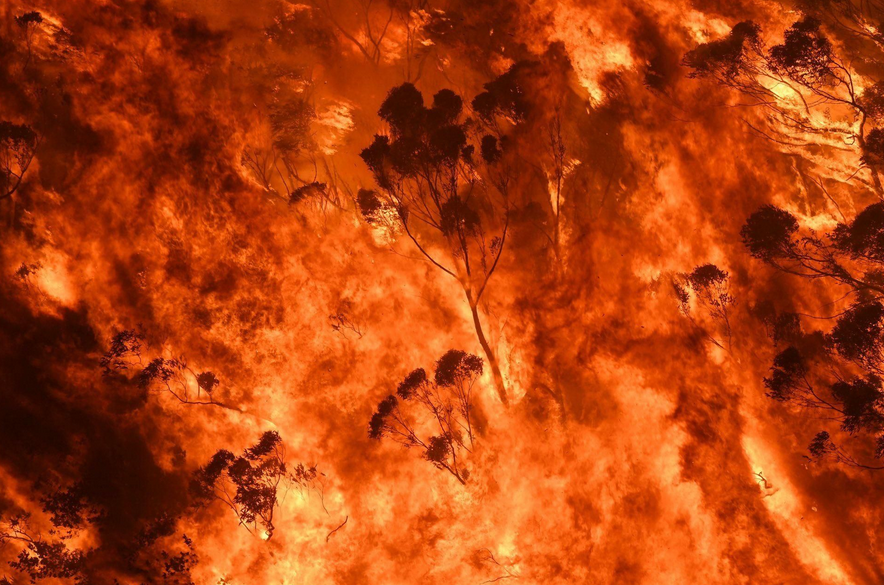 NSW Environment Minister Matt Kean will protect the ‘dinosaur tree’ by edict. This comes a full millennium after King Canute demonstrated the futility of attempting to subdue natural forces by royal decree. Canute only got his feet wet, whereas NSW suffered death and destruction in our Black Summer, visited upon us by green ideology.

Kean said Wollemi Pines, which lived with dinosaurs, were saved by heroes from NPWS and RFS during the Gospers Mountain Fire. They’re supposedly threatened by more frequent and intense fires due to climate change and, less mentioned, by phytophthora root-rot fungus. But now, at the stroke of a pen, they have ‘special protection’ because he’s listed them as an “asset of intergenerational significance”.

Surveyor General Mitchell described the origin of what is now the Wollemi Wilderness:

A deposit, upwards of 1200 feet thick, forms the Blue Mountains … it is traversed by ravines, which increase in depth, in proportion as the sandstone attains a greater elevation, and present perpendicular crags and cliffs of a very remarkable character.

The ravines were carved out at the end of the Triassic, 201 million years ago, when the Blue Mountains started to rise and the Cumberland Plain to descend at the Lapstone Fault. During the Jurassic, which ended 145 million years ago, these ravines cut back into the mountains. Fossils show that Araucarias, Agathis, and Wollemia diverged from a common ancestor after the ravines had dissected the sandstone.

The ‘dinosaur tree’ (a young, commercially cultivated specimen at left) actually appeared after dinosaurs vanished in the Cretaceous–Tertiary extinction 66 million years ago, but it survived millions of years of climate change as Sahul (New Guinea, Australia and Tasmania) broke away from Gondwana and ‘drifted’ north, becoming hotter and drier. The deep easterly ravines, now containing a hundred-odd Wollemi Pines, were a perfect refuge, providing shade and shelter from the sun and from drying winds and lightning fires. Humans arrived in Australia some 65,000 years ago, and by 40,000 years ago they had taken control of fire and changed vegetation across Australia — except in places such as these remarkable ravines, inaccessible to people and fire. They were a true mini-wilderness.

The oldest known Aboriginal site in the Blue Mountains dates back 22,000 years. It has art galleries under overhangs, and rock slabs used to grind stone axes. About 12,000 years ago, extreme climate change brought a massive rise in sea levels when the last ice age ended. Tasmania was separated from the mainland first, then New Guinea. Gorges in sandstone country east of the mountains were flooded and became Broken Bay and Sydney Harbour. Coastal areas where Aborigines lived are now part of the continental shelf under the Tasman Sea.

One sediment core from the Blue Mountains extends as far back as the earliest known Aboriginal site. Its record of vegetation and fire around Mountain Lagoon was analysed by a university student in a B.Sc. thesis that was never published. It probably challenged the prevailing academic wisdom. In any case, Aboriginal people maintained the Blue Mountains in an open, healthy, safe and productive condition by mild burning for at least 20,000 years. Their management protected the mini-wilderness and the Wollemi Pines.

During the Settlement Drought, Aboriginal fires were constantly burning in the sandstone country. In February 1791, over three days of extreme temperatures (~430 C) and searing northwesterly gales, masses of flying foxes and lorikeets dropped dead in what is now Parramatta Park. But the fires didn’t affect the European settlement. In Decem­ber 1792 fires near Par­ramatta were still able to be controlled by hand during extreme weather because fuels were light and discontinuous. In the mountains, Europeans progressively occupied and developed grassy sites on shales, and particularly on basalts, with more productive soils. An area around Uraterer Mountain was taken up by Robert Gosper and others from 1877. It officially became Gospers Mountain in 1970. 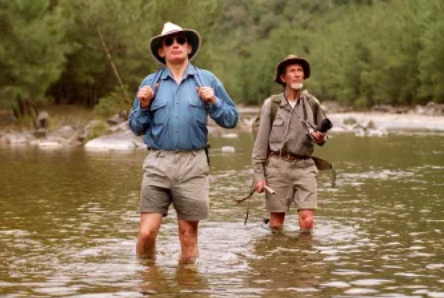 Wildfires were more frequent and less intense in the sandstone country prior to 1970, when NPWS introduced fringe burning and fire suppression. Reduced frequency and in­creased intensity of fire resulted in scrub development, impaired access, reduced floristic diversity, disease and a self-perpetuating regime of high intensi­ty fires. Five years after Wollemi National Park was gazetted in 1979, Dunphy’s son, Milo, and the Colong Foundation took new environment minister Bob Carr bushwalking (above) in the Blue Mountains. The trip filled him enthusiasm to create the ridiculous Wilderness Act of 1987. According to the Act, a wilderness area must be

in a state that has not been substantially modified by humans and their works … of a sufficient size to make its maintenance in such a state feasible, and the area [must be] capable of providing opportunities for solitude and appropriate self-reliant recreation.

In January 1994, wildfires in the sandstone country were uncontrollable. They burnt more than 30,000 hectares around Sydney, claiming hundreds of houses despite the efforts of a well-equipped army and air wing of firefighters. Large expanses of three-dimensionally continuous fuels generated fire storms and ember showers. The 1994 fires gave impetus to legislative reform. After that, prescribed burning in NSW was reduced. It is now illegal in NSW to burn frequently and mildly enough to sustain a healthy and safe landscape. Later in 1994 the Wollemi 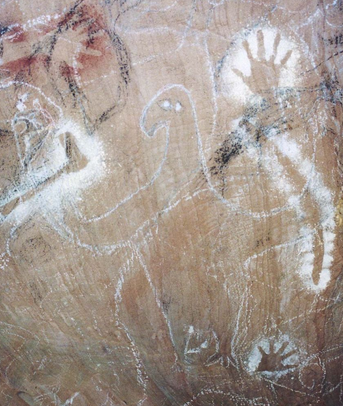 In 1995, a major Aboriginal art site was found in another part of Wollemi at Eagles Reach (right). There are more than 200 paintings in 12 layers representing many generations of Aboriginal culture. The huge Wollemi Wilderness was declared in March 1999.

The assertion that Australia’s forest lands were once all some sort of grassland or open woodland and should be burnt more often to mirror Aboriginal burning practices is incorrect.

It quotes Dr. John Benson, who denies frequent mild burning by Aborigines. When the Wollemi Pines were threatened by wildfire in 2002, he announced that they have been burnt before. Apparently there are remains of charred trunks with new coppice shoots. Since Aboriginal management was disrupted, the natural protection afforded by the deep ravines has been lost to the explosive fuels in the unnatural ‘wilderness’ above.

In 2005, NPWS revealed a phytophthora infection in the pines and soil. They blamed unwanted recreationists who had left footprints and signs of campsites. NPWS staff and researchers supposedly weren’t responsible because they sterilise their clothes and equipment. However phytophthora originated in Gondwana and has likely been at the site for a long time. It responds to deterioration of tree roots as a result of unnatural disturbance. I think it’s most likely that the pines’ purported guardians have caused an outbreak by all their trampling of the thin, poorly developed soils with a high content of organic matter. This is a truly unprecedented development in the mini-wilderness.

Bob Carr reminded wilderness enthusiasts in 2014 what a great job he’d done in “saving these vast, wild places preserves our rich indigenous cultural heritage”. This reminded me of the best-ever bumper sticker: ‘The only true wilderness is between a greenie’s ears‘. Carr’s move also conveyed a political advantage: in declaring vast tracts of NSW as wilderness which should be left to its own devices, he neatly removed the state’s obligation to care for them.

A lightning strike on October 26, 2019, near Gospers Mountain started the largest-ever forest fire that has occurred anywhere in the world, a consequence of a single and natural, in this case, ignition. A couple of weeks later, it was declared an emergency. Up to 3,000 firefighters, mostly volunteers, were battling the fire at any one time. It burnt uncontrolled for three months, covering an area of more than half a million hectares, with a perimeter of 1400 kilometres. It was reported to have been “tamed” by Rural Fire Service Superintendent Karen Hodges on January 12, 2020, after running into rural or residential areas and other fires.

Three days later, on January 15, Minister Kean announced the Wollemi Pines had been secretly saved. With fires still burning out of control in southern NSW and VIC, the Sydney Morning Herald added that: “All up, fires in NSW have scorched about 5.2 million hectares, with estimates of national wildlife losses from this season’s bushfires topping one billion animals nationally”.

And now, exactly a year later, Kean — an interesting appraisal of his politics and connections can be found here — has ‘saved’ the dinosaur trees forever with a mere stroke of his mighty green pen.

While inner-city greenies will thank heavens for Bob Carr and Matt Kean, the bush has no reason whatsoever to do so.

Vic Jurskis worked for NSW Forestry Commission as a labourer, forester, researcher, manager and finally, Silviculturist for the Commission’s Native Forest Division. He investigated chronic eucalypt decline across Australia in a Fellowship with the Gottstein Trust, and with a Maxwell Ralph Jacobs Award from the Australian Academy of Science. He has published two books, Firestick Ecology, and The Great Koala Scam, both available from Connor Court.

Sins of omission and Climate Commission