In Egypt, Climate Catastrophism as Usual 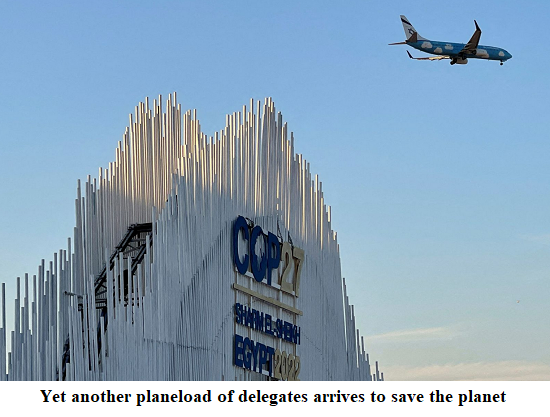 Another year, another United Nations Conference of the Parties (COP) on how to persuade the bogeyman of our age, climate change (CC), to cease misbehaving. Time – and money – is running out yet again.

With more than 30,000 delegates attending this “watershed moment” – yes, over 30,000 — COP27 will be full of sound and fury, dire warnings, purveyors of dodgy carbon credits (including the UN’s own carbon offset platform), utopian fantasists and the usual crowd of jeremiahs, politicians and bureaucrats preaching “climate chaos”. Many will have form too, having spent years hyping the issue at every opportunity.

The event is being held in Sharm El Sheikh, a resort city located at the southern tip of Egypt’s South Sinai Protectorate. There has not been as much excitement there since the 1967 Six-Day War. The discovery of the Great Green Pyramid of Gaia a decade ago in the Ruba’ el-Khali (Empty Abode) also drew world attention to the region.

As the days turn into weeks, around midnight on the final day “transformative climate solutions”  could emerge from COP27’s so-called “innovation hubs”. If so, they will include demands for more climate finance. Yet many developed countries are themselves moving closer to recession (or worse) after joining the UN’s Race to Zero. Aptly named, given its ultimate destination is surely the Valley of the Jackals or the Tomb of Anubis.

That said, the Race to Zero is promising to deliver virtually everything on a green activist’s wish list: “A healthy, resilient, zero carbon recovery that prevents future threats, creates decent jobs, and unlocks inclusive, sustainable growth.” Led by “high-level champions” Mahmoud Mohieldin and Nigel Topping, it strives to “mobilize actors outside of national governments to join the Climate Ambition Alliance.”

A lot of countries also want a new UN fund to “compensate” them for any and all loss and damage inflicted on them – not by witches, as in the 1589 case of Anne of Denmark – but allegedly by the developed world. The UN’s existing $11 billion Green Climate Fund apparently is unable to take on this controversial role. It was, however, “delighted to attend the #COP27 high-level roundtable on the future of energy, exploring ways to harness Green Hydrogen for the benefit of developing nations. GCF is committed to playing its part to help accelerate access to renewable hydrogen at scale & unlocking its potential.”

As for the “loss and damage” concept, it has been tricky territory for years. In the unlikely event COP27 agrees to create another cash cow, presumably it would have to develop some way to determine how disasters would qualify for compensation, hopefully a methodology more sophisticated than the number of “victims” or a show of hands in a boardroom.

Yet why is every nasty “weather event” today assumed to be caused by dangerous anthropogenic CC (DACC)? Dismissing concerns about dodgy “climate-induced” attribution statements with more pseudoscience and alarmist rhetoric is a tactic, not an argument.

In simple terms, computers compare an imaginary climate without human-caused carbon dioxide with the current one full of unknown complexities. The modellers then announce they have ‘proved’ the ‘climate emergency’ hypothesis. Since the outputs of these models are unfalsifiable – one cannot prove that a wholly imagined scenario is ‘false’ – their notions are no more than worthless opinions.  — Daily Sceptic, October 24, 2022

To raise such matters publicly today, either in Egypt or anywhere, is probably enough to get one hanged or beheaded in the public square. One could quickly find oneself deep in the Red Sea without an aqualung. Anyway, few folk have the desire to commit DACC heresy; certainly not the UK’s new PM, Rishi Sunak.

Indeed, after a backward one-and-a-half, PM Sunak surprised everyone by flying to the COP27 World Leaders Summit. He urged global leaders to “move further and faster” to renewable energy (RE), to great applause. For according to UN agencies, RE is the only way humankind can get rid of nasty weather and limit global warming to 1.5C above pre-industrial levels.

The WMO’s provisional 2022 State of the Global Climate report is, predictably, “a chronicle of climate chaos”:

a dizzying catalogue of worrying climate events, taking place against a backdrop of record levels of carbon dioxide, methane, and nitrous oxide – the three main greenhouse gases that contribute to global warming – which is currently estimated to be around 1.15 degrees Celsius above pre-industrial levels.

Making the atmosphere of an entire planet dance to the UN’s tune is a big call. It would require rather more than rhetoric. A little divine intervention would help Gaia get her act together too.

For me, there is still no way of confidently distinguishing so-called extreme weather from natural variability, or legitimising the dodgy attribution statements proliferating everywhere. The UN, however, clearly believes demonising — and monetizing — a trace gas can get it a long way, especially in a world obsessed with getting its hands on all that “loss and damage” lucre. Some folk even propose writing off developing country debt as “climate-change resilience” expenditure. What a novel idea!

As for the Russian invasion of Ukraine, Britain’s Rishi Sunak suggested it actually “reinforced” the importance of ending dependence on the very “fossil fuels” (FF) now so desirable, not vice versa.

Ironically, the COP27 host country, Egypt, is the second-largest producer of natural gas in Africa. According to Chatham House’s Karim Elgendy, it is also emerging as a fossil gas hub for the eastern Mediterranean.

Egypt is one of only a few countries which failed to submit an updated NDC in 2021 and its upcoming update will not include an economy-wide carbon reduction target. The country also has never published a long-term strategy and has no decarbonization plans. Independent estimates suggest it should cut rising emissions by one-quarter by 2030, and by two-thirds by 2050 to be aligned with the Paris Agreement. This partly explains why observers rate Egypt’s climate action as highly insufficient. — Karim Elgendy, Chatham House, July 6, 2022)

As for the Curse of COP27, there are plenty of contenders for this title. Take your pick. A lot of punters are still backing Greta Girl. It’s a long shot. No longer the UN’s favourite poster child, she’s likely to be scratched for being a no-show.

Climate activist Greta Thunberg has joked that she is adopting a “net-zero” approach to cursing, an apparent response to criticism of her use of strong language at a demonstration earlier this week.

The 18-year-old Swede was filmed singing “You can shove your climate crisis up your a**e” to the tune of well-known children’s song “She’ll be coming ‘round the mountain,” alongside fellow climate campaigners on the first day of the COP26 summit in Glasgow, Scotland.

Following a backlash by some over her choice in words, Thunberg posted a tongue-in-cheek response to her five million Twitter followers on Wednesday morning.

“I am pleased to announce that I’ve decided to go net-zero on swear words and bad language. In the event that I should say something inappropriate I pledge to compensate that by saying something nice. #COP26,” she wrote. — CNN, November 3, 2021

Ms Thunberg, alas, still struggles to say something nicer about COPS than “blah, blah, blah”. She recently described them as an “opportunity for leaders and people in power to get attention, using many different kinds of greenwashing.” Launching her book, The Climate Book, at the Southbank Centre London Literature Festival on October 30 this year, Thunberg said: “I’m not going to COP27 for many reasons. The space for civil society this year is extremely limited.”

António Guterres: Humanity must co-operate or perish. The clock is ticking. We are on a highway to climate hell with our foot still on the accelerator. — UN Secretary General, address to world leaders, COP27, November 7, 2022

Former vice-president of the United States, Al Gore, has just been speaking at COP27:

We have a credibility problem, all of us….we’re talking, we’re starting to act but we are not doing enough. We have to see the dash for gas for what it really is, a dash down a bridge to nowhere, leaving the countries of the world facing climate chaos and billions in stranded assets, especially here in Africa.

A lot of money is on the curse of demography. According to the UN’s World Population Prospects 2022, the world population will reach eight billion next week, on November 15. India will surpass China as the world’s most populous country next year. Despite growing at its slowest rate since 1950, global demographic momentum will still drive it to 8.5 billion in 2030 and at least 9.7 billion in 2050. For better or worse, the UN expects it to peak at 10.4 billion during the 2080s and remain near that level until 2100.  If the “planet is sending a distress signal”, could it be that there are too many of us?

The biggest curse of all, of course, is the curse of existence.  Everything is in a state of change, including the climate. Even with the best of intentions, we cannot create a global utopia with “climate stability”, one with a Goldilocks climate that would suit everyone, everywhere and forever. To believe otherwise is surely magical thinking.

It is not a comforting outlook.  Worse still, as Nietzsche noted, Nature is indifferent to us.

In some remote corner … of the universe there was once a star on which clever animal animals invented knowledge [and climate prophecy]. It was the most arrogant and mendacious moment of ‘universal history’: but only a moment. Nature took a few breaths and the star grew cold; and the clever animals had to die. Someone might invent such a fable as this and yet still not have illustrated well enough how pitiful, how shadowy and fleeting, how aimless and capricious the human intellect appears within nature. There were eternities in which it did not exist; when it has gone again nothing will have happened. For there exists for that intellect no mission extending beyond the life of man… — Friedrich Nietzsche, On Truth and Lies in a Non-moral Sense, 1873

After three decades of CC hyperbole and the emergence of a “there is noPlanet B” religion, the future looks grim. We are either on a highway to climate hell, “backsliding” on a road to nowhere, or stuck on a swinging bridge over rising, troubled waters.

All one can do is seek refuge in an enclave of sanity somewhere, or a sacred text or verse. It will not be easy, but try to keep your head when all about you are losing theirs and blaming it on you and your pal, carbon dioxide.

The worldly hope men set their hearts upon
Turns ashes – or it prosper; and anon,
Like snow upon the desert’s dusty face
Lighting a little hour or two – is gone.

19 thoughts on “In Egypt, Climate Catastrophism as Usual”

Why David Suzuki had to quit his own charity