Facts and Lies about Cattle and Methane 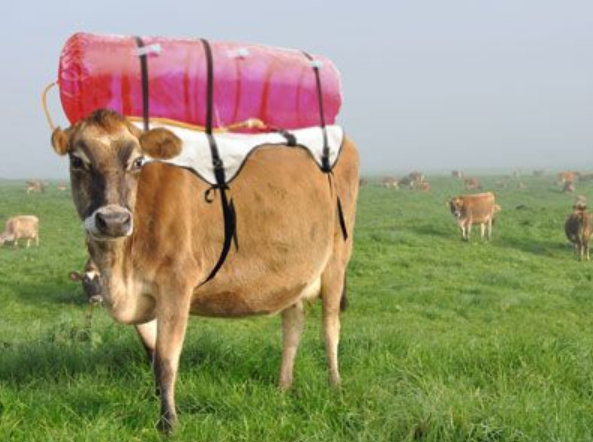 The implementation of regulations and taxes intended to significantly reduce emissions of methane from livestock is unneeded, ineffective and based entirely on a highly misleading consideration of relevant scientific understanding. It amounts to a hypothetical solution to an imaginary problem and is being pursued for green votes in the name of virtue signalling, woke politics and publicity; not for any harm that can be either demonstrated or prevented (see references 1,2,3)

Genuine relevant expertise is conspicuously ignored. In fact, the whole mania about climate change has been promoted by a motley crew of otherwise third-rate academics claiming high level authority on all things to do with climate, for such is the conceit of self-declared ‘experts’ in climatology.  They attract generous funding and public attention by trumpeting predictions of  imminent disaster, be it from extreme weather and rising sea levels or any of the many other doom-laden scenarios. Any and all opposing evidence from genuine expertise in atmospheric radiation physics, meteorology, geology, oceanography, engineering, statistics, and the historical evidence of varying climate conditions has simply been ignored or denigrated, even censored.  Abundant and compelling information that does not support the alarmist claims is never acknowledged or addressed. (4,5,6)

Early in the alarmist campaign a few of the self-styled “climate experts” attempted to debate the opposing evidence and came away looking poorly informed. Further debate was thereafter avoided; since then, opposing evidence has been ignored or dismissed as “misinformation”. However, this also means that it stands unrefuted.

Unfortunately, today’s academically indoctrinated, politically correct journalists eschew the healthy scepticism of past journalism, being satisfied to regurgitate the alarmist press releases with no consideration for and no mention of the expansive body of well-founded dissent from alarmist orthodoxy. The result has been that the actual effects of greenhouse gases have been grossly misrepresented in the public debate and the whole developed world is being ignorantly herded by a handful of academic hacks into a lemming-like march towards a global economic collapse. Observe the energy crisis now gripping Europe as winter descends and wonder just where, and how much worse, it can get.

Vanishingly few political leaders have the technical background or broad understanding of the relevant science and technology to make their own informed assessment of the issues. Then, too, they face never-ending and overwhelming demands for their attention and attendance in regard to other matters.  Consequently, they must rely largely on a quick scan of mainstream news reports, the empire-building advice of government technocrats, and the pronouncements of academic grant seekers coloured by the overwhelmingly leftist political bias of the academy.

The following key scientific facts. clearly refute the methane alarmism.  These are all easily verified and un-controversial:

1/ Methane is a minute trace gas in the atmosphere. It comprises about 2 parts per million of the air (or one five-thousandth of 1%).  Although it is a strong absorber of infrared radiation, it only absorbs IR in two rather narrow bands of the broad IR spectrum. The much wider IR absorption spectrum of water vapor overlaps that of methane.  Although water vapor is a weaker absorber of IR in the narrow range of absorption by methane, the concentration of water vapor is about 10,000 to 20,000 times greater than methane. The IR absorbed by methane is in fact already fully absorbed by water vapor and any warming or cooling effect from more or less methane is effectively nil. ,8.,9.

2/ Methane (CH4) in the air oxidises into CO2 and water (H2O). The various figures cited for the greenhouse effect of methane being 20 or even 80 times greater than CO2 is simply bullshit.  Such estimates assume it will be in the air for a hundred years, when its half-life imposed by oxidisation is only about 5 years. Being halved in 5 years means than in 100 years only one- millionth of the starting amount would remain.

3/ Cellulose is the most abundant structural component of plants. Its decomposition by various microbes and digestion by a wide range of animal life generates methane. This is pervasive across all vegetated land. Plant material not eaten by livestock is only consumed by something else or decomposed by microbial activity with similar amounts of methane being produced. ,11.

4/ Trees (especially rainforest and mangroves) are major emitters of methane, both through their own metabolism and by acting as conduits bringing methane generated by microbial activity in the soil up into the atmosphere. A recent study has found that the Amazon rainforest is a major global source of methane. ,13.

5/ In Australia another major emitter of methane is termites. Every one of the untold millions of ant mounds across the continent is a methane generator. Any reduction achieved in consumption of plant material by livestock will just mean an increase in food for the termites.

6/ The bottom line is that reducing livestock will have little or no effect on the amount of methane being generated from an area of land.

7/ The current rate of increase for methane in the atmosphere is about 0.007 ppm/year. If this continues it will take about 270 years to double the current concentration. However, methane has sometimes stopped increasing for years so future levels are uncertain. In any case, the possible amount of increased warming by methane from livestock will be too trivial to detect.

In fact, the best estimates of possible warming from all greenhouse gas emissions is only about the same as you could get from moving to about 2 degrees less latitude, or about 50 metres lower altitude — similar to the amount of warming you may have often experienced while having an early breakfast on a summer morning. ,16.

The obsession with climate change when everything about it is well withing the limits of previous historical variability is looking more and more like another one of the episodes of mass mania which seem to occasionally erupt in most, if not all, human societies.  Such outbreaks appear to be totally immune to reason and evidence.  They also seem to have to run their course until either the severity of the consequences or boredom with stupidity sees a return to sanity.

One thing seems increasingly probable: we must surely be nearing the threshold for a major politico-economic reset, with major global impacts on energy, food, water supplies, employment, and world trade. Setting out to restrict our ability to cope with difficulties in all these same things at this time is beyond stupid.  To do so on the basis of hypothetical speculation, with only the most dubious of supporting evidence, and against abundant well-founded contrary evidence, enters the realm of idiocy.

Walter Starck is a marine biologist and regular Quadrant contributor

The following links to further information are but a small sample of the compelling mass of sound evidence which refutes the alarmist claims regarding the threat to climate change from methane.

6.The methane myth: Why cows aren’t responsible for climate change

22 thoughts on “Facts and Lies about Cattle and Methane”

Catastrophism Out in the Cold

What’s wrong with the science?

Why trim the RET when you can axe it?