Plans for the Planet, Especially Kids 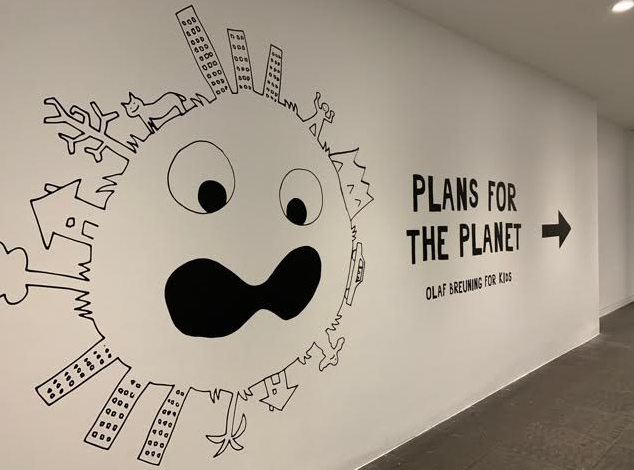 Recently, I took a trip to the National Gallery of Victoria’s exhibition of Impressionist art, on short-term loan from the Boston Fine Arts Museum, and it was very nice. Apart, that is, from the loud piano music on an endless loop, meaning I must have heard Erik Satie’s Gymnopedie 20 times in 90 minutes. But that’s actually not the reason I want the trustees to take  NGV director Tony Ellwood AM outside and counsel him. They should counsel him for turning the NGV into an green/Left indoctrination hell for kids from pre-school through primary school age. 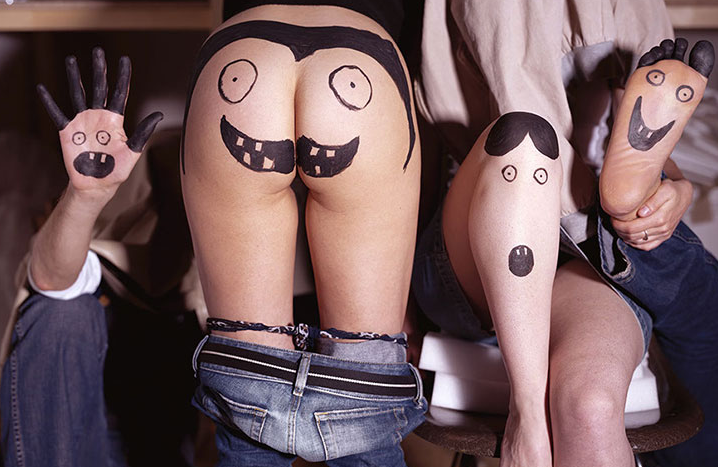 let me tell you what the NGV does to kids, including the littlest. You see, after the Impressionists I  wandered off to the Goya exhibition, but got lost and wound up in an exhibition for kids called Plans for the Planet. It features third-rate US “contemporary artist” Olaf Breuning, a sample of whose more, er, adult work is pictured. For his first exhibition for children, the NGV tells us he is ” inspired by his thoughts about the world we live in and how children see the world”. Presumably not as a pert, hand-painted bottom. His artworks, NGV assures parents,

show his sense of humour and his sharp observations. Plans for the Planet is an adventure for kids  and a chance for them to share their points of view! 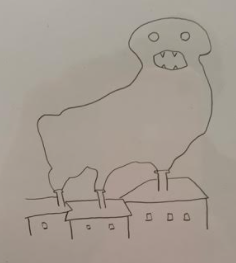 Yeah, sure.  By the entrance is his pencil sketch “Global Warming” symbolised by a fanged Francis Bacon-style three-legged monster (left) standing on house roofs and consisting of smoke coming out of the dwelling’s chimneys. Breuning confuses smoke from hearth fires with CO2, but who cares? Certainly not the NGV. Then kids can enjoy his sketch of “Mr Greedy”, a symbolic capitalist with dollar-signs for eyes, who is chopping up his prey on a table with a big knife. The Plans for the Planet logo itself is a horrified-looking planet a bit like Edvard Munch’s  “Scream”, perfect for giving nightmares to kidlets.

So far we have ventured no further than the exhibition’s entrance. Let me take you inside.

Olaf uses cute little animal drawings (right) to adorn his messages like “Where have all the trees gone?” and “We need 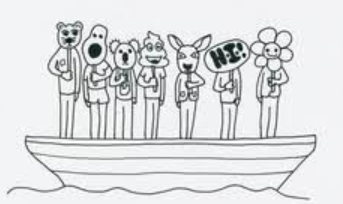 more trees.” Never mind that the global tree count was revised by scientists in 2015 to 3 trillion, seven times the previous count  as at 2014 (tree-warming science isn’t settled yet). And never mind that CO2 in 40 years has greened the planet to an extent two and a half times the size of Australia. Olaf instead tells kids,

Every day fossil fuels like oil, gas and coal are taken from the earth and forests are being chopped down. But people like you and me can work together to change things [sure, nine year olds know how to reform society] and help look after the planet. With your friends, make a start and draw trees to save the forest. 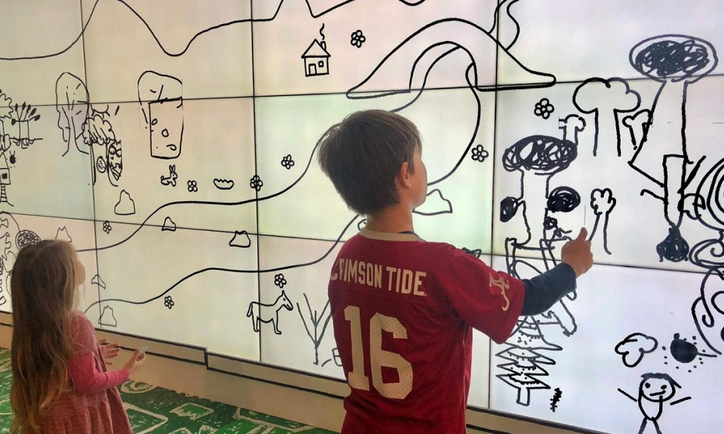 The NGV director then invites kids to itemise their Plans for the Planet, using interactive video boxes. As helpful-hinter Olaf prompts, “I dream of clean air. Stop Global Warming!”, and “I think cars should run on solar energy” and “I think we need to tackle climate change” and “I say NO to fossil fuels. It’s time to ACT!”. To look on the bright side, there’s also, “I think people should be peaceful and loving”.

When kids are asked on one panel, “What do you want to say about the world?”, the next panel suggests, “No! I don’t like…” followed by Olaf’s sophisticated cure-all for the planet’s woes, “NO PLASTIC!” I’d say Olaf and the NGV executives are not the brightest stars in the firmament, given plastics’ ubiquitous presence in modern life. (“NO PLASTIC” is what Mr Ellwood, easily impressed, hails as a “sharp observation” by his pet artist).

For Olaf, and presumably NGV directors, veganism is all the go. Kids are to chant, “I think animals deserve the same respect and care that we do” and “I dream we will make animals healthy and happy”. Do such kids know where bacon and chops come from? Do NGV executives really think shrimps are happy to top the canapes they hand around at opening nights?

A screen cheerily titled “Pollution” asks, “How can we reduce air pollution and save fossil fuels?” with the answer, “We now have electric cars.” Yes, let’s buy a $73,000 Tesla, base model.

I mentioned the screens are interactive. The programmers, imagining I am eight, asked me, “What other inventions can we think of for the future.” I typed in, “Nuclear Power”. The screen lit up in technicolor, “Great Idea!” and my “Nuclear Power” suggestion filled the screen accompanied by cute laughing animals. The video box said my suggestion would now be projected on the walls in lights to delight other visitors in the room. I gazed around but couldn’t see my Nuclear Power ad. Did the algorithm finally smell a rat?

I corrected “Nuclear Power” to “More Fossil Fuels” and although the algorithm again thought in Technicolor that it was a “Great Idea!”, it still refused to project it.

The other Breuning rooms involved cheesy messages like “Respect love and care for people”, and diagrams espousing a “Better World”. Keep in mind that your taxes and mine have financed this drivel, which must have cost the NGV a bomb to stage.

I limped from Olaf Breuning’s show to depart the NGV, only to find in the gift shop that the main table of books for kids was adorned with every variety of Greta Thunberg tributes, other scary warming propaganda for under 12s, and multiple kids’ books describing Aboriginals as a cross between flower children and noble savages, unlike early settler accounts. 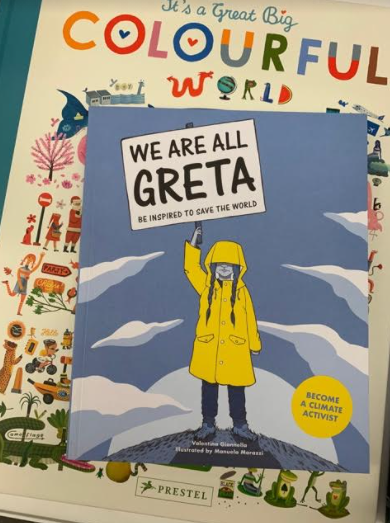 This kids’ book table had about 25 volumes, and I’ll swear the majority aimed at greenwashing Melbourne’s put-upon kids. Here’s my sampling:

♦ Earth’s Heroes by Lily Dyu, stars a glumly plaitted Greta Thunberg “saving our world” to cheers of a milling crowd around her and kindly greens fanatic David Attenborough fondling a chameleon. A black man climbs up a windmill in the background, perhaps in search of subsidies.

♦ We Are All Greta – be inspired to save the world. Become a climate activist.” By Valentina Giannella. Next page, “Follow in Greta Thunberg’s footsteps and join the global mission to save our planet from the effects of climate change. Hashtag, #WeAreAllGreta.”

♦ Greta’s Story – the schoolgirl who went on strike to SAVE THE PLANET” – An unofficial biography by Valentina Camerini.  Enough said, except that Greta’s latest bon mot goes like this: “The audience has grown weary. This show is over. Thank you”

♦ Our Beautiful Earth – Saving our Planet Piece by Piece. The book’s pages literally shrink under capitalism’s assault. As one shrinking page puts it, “Manufacturing cars and building factories that polluted the air…and a bit of earth disappeared.” I hope the parents who buy this for their kids aren’t the ones chauffeuring the same kids to school and jamming the traffic mornings and afternoons. A double-page spread shows a town at night girdled by stinking black gases from factories and a polluted field or river, I’m not sure which.

♦ In My Room – A book of creativity and imagination. Most pages seem fine but one spread does show a girl and a boy dressed formally, with the text,

Let’s give this last tome the benefit of the doubt, shall we?

On the Aboriginal front, Aunty Joy Murphy and Lisa Kennedy offer a book “Welcome to Country.” I was struck by one page of 2021-style wisdom: “You are welcome to everything, from the tops of the trees to the roots of the earth.” The excellent ABC show Black Comedy (with black actors and writers) had a 2015 episode satirising a similar  sentiment[i]:

Uncle: The Welcomes income stream has been a lucrative venture for the Elders. With all this fighting we will be running ourselves out of business. Sabotaging welcomes, water logging gum leaves – it has to stop!

Aunty Joyce: Thank you and I just want to say, “Welcome from the tops of the trees [to the bottom of the seas]…

Aunty Mary: Joyce, knock it off. You know very well you stole that line from me.

Joyce: Oh, Mary, why would I want anything of yours?

Mary: Because you are a sneaky bitch.

(Part II of The Elders can be viewed here.)

To my surprise, I found no sign on the table of Bruce Pascoe and Dark Emu, despite Pascoe’s woke crap being right up the NGV’s alley. I’ll recommend they add it to their stock.

Propaganda and commerce from Breuning’s Mr Greedy show overflowed to the gift shop. For sale alongside the kids’ anti-capitalism and anti-racist story treats were toddlers’ T-shirts with the message “What are your Plans for the Planet?” plus Breuning’s horrid screaming planet sketch (this little T-shirt is a steal at $39.95, it must be woven from ermine fur). Other Breuning messages for affluent parents involved “Global  Warming” and “Extinction” in jagged outlines, surrounded by virtuous and soothing counter-messages like “Solar Power”, “Land Rights”,  “Conservation” and “Love”. There were spiral bound Olaf Breuning workbooks titled “My Plans for the Planet” in two cover colors, but the inside pages were 100 per cent blank. Lord knows what NGV charges these out at.

So here’s the deal, Melbourne. Get to the Boston Impressionists, and use earplugs to defeat that awful piano. Dump your kids in the Plan for the Planet show, but yank them out before the NGV converts them to school strikers and mini-Extinction Rebels.

Above all, DON’T Exit Through the Gift Shop.

[i] I’m sure Aunty Joy and Aunty Joyce are not the same person. Aunty Joy  Wandin AO, says the book, ‘is the senior Aboriginal Elder of the Wurundjeri people of Melbourne. We show respect for her and other Elders by calling them Aunty or Uncle. Aunty Joy has had numerous government appointments including as a member of the Equal Opportunity Commission of Victoria and of the Anti-Discrimination Tribuinal.’

4 thoughts on “Plans for the Planet, Especially Kids”