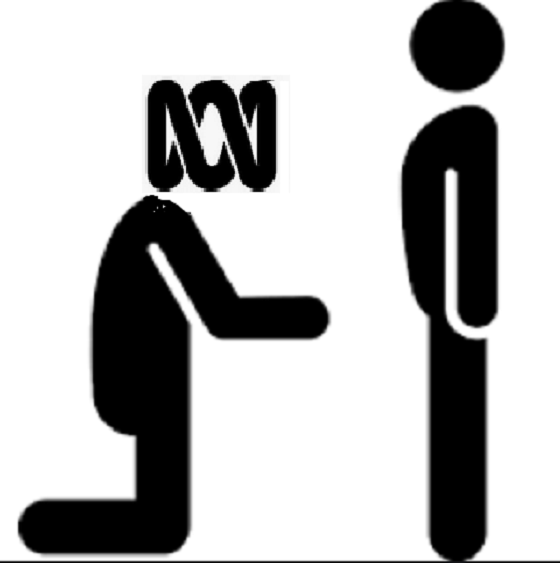 What delusionary world do ABC people inhabit?  The national broadcaster’s editorial director, Alan Sunderland, last year fulminated against “liars and cheats and deceivers” generating fake news for the gullible. He wrote, “All responsible media organisations promise to aim for accuracy, to tell all sides of a story… Some, like the ABC, promise never to take an editorial stand or express an opinion, while others promise to make clear the distinction between their reporting and their commentary…” (My emphasis)

Oh, I see. There’s no ABC green-left narratives on lovely wind and solar energy, or ABC tear-jerking for discredited Sri Lankan “refugees”, or for stacking panels with ‘progressives’ and blackballing the Institute of Public Affairs…

My incredulity accelerated when I came across Sunderland’s 11-page audit of the ABC’s coverage of Al Gore’s Melbourne-Sydney visit in mid-July 2017. Gore came to push his new climate-horror film “An Inconvenient Sequel”.

Sunderland’s “Editorial review of ABC interviews with Al Gore, July 2017” checked if the ABC’s coverage of Gore was biased and/or excessive, and whether Gore suckered the ABC into unduly promoting his film. Sunderland also checked whether the ABC, as per charter, was “present(ing) a diversity of perspectives so that, over time, no significant strand of thought or belief within the community is knowingly excluded or disproportionately represented.”

Moreover, Gore’s Inconvenient Truth film was deemed in late 2007 by the UK High Court’s Justice Burton to have nine errors,

the first two of which are apparently based on non-existent or misunderstood evidence, and the balance of which are or may be based upon lack of knowledge or appreciation of the scientific position, and all of which are significant planks in Mr Gores’ ‘political’ argumentation.

The Judge said the Education Department had also been violating laws against feeding politically partisan material to students. As a result the film can only be shown in UK schools if students are also given guidance notes both about the errors and the film’s agitprop content. Teachers must note

By the way, Gore successfully bluffed 7.30’s Heather Ewart in 2009 that he won the Justice Burton case:

EWART: There was also, though, a British judge who ruled that there were in fact, I think, nine errors when it was challenged in court?

GORE: Well, the ruling was in my favour.

Sunderland’s audit first deals with a “suggestion” that his ABC climate enthusiasts booked 18 interviews with Gore. Not true:

Our investigations revealed a total of 8 separate interviews were conducted.

Segments of some these interviews were picked up, edited and repeated across a range of different programs in addition to that [eight], meaning that Al Gore’s visit generated substantial coverage across the ABC.

He asks, was this “excessive and unjustified by the editorial value?” His answer:

There is no evidence to suggest this was the case.

The primary interviews are conveniently listed[1] as

In the 7.30 interview, Stan Grant – who sometimes bucks the system – did ask about accusations that Gore exaggerated his alarmism, also making mention of the South Australian SA blackouts. His other questions were patsies, such as “Gore’s view of President Trump’s attitudes and their impact on the US reputation” — sheesh, there’s a hard-ball interrogation for you, not! Grant further asked if climate change agitation is “affected by the rise of populism” — “populism” being ABC code for any success from right of centre.

Sunderland is thrilled by Gregg Borschmann’s interrogation of Gore. He  hails the “highly experienced specialist journalist on environmental issues” who “explored a range of issues more closely”. The punchy ones included (I’m not making anything up):

Sunderland is miffed that Gore didn’t get a Dorothy Dixer from his ABC myrmidons on the dreaded Adani coal mine (as at 2017; now a mine which Labor is strangely fond of). This omission was remedied by ABC’s Brisbane radio and the Hack program.

(a) Why with your multi-million fortune did you never re-shoot Inconvenient Truth to correct the errors – which even included that all citizens of sinking Pacific islands have evacuated to New Zealand? Surely that failure’s Inconvenient when you’re offering a Sequel?

(b) Given that the swimming pool of one of your three mansions uses the same electricity as six average US homes, might you be accused of emissions hypocrisy?

(c) Does your partnership’s profit of $US200m plus from carbon trading in 2008-11 suggest a conflict of interest in your promoting of green energy? Are you now a big investor in Beyond Meat, a plant-for-meat substitute beneficiary of the UN climate push against real meat?[2]

Sunderland has a threefold justification for the ABC’s welter of publicity for Gore. First, he’s a former vice-president (1993-01 – two decades ago) and crusades on climate; second, he made an influential climate film (12 years ago), and third, he has a new film when Australia has “gas shortages, power blackouts, rising electricity prices and policy challenges informed by the recent Finkel Report.” Citing householders’ energy-price horrors is refreshing frankness for the ABC people, 3% of whom are on $200,000-plus a year. For that well-heeled cadre home energy costs are but small change.

Sunderland then checks how good Gore’s new film is by selecting what he presents as a representative sample of overseas reviews: two from the far-left Guardian; one from the liberal Washington Post; one from Variety, the bible of way-left Hollywood; and one from 9to5 Mac, a magazine specializing in Mac news and comment. Since Al Gore is a board member of Apple Inc., that might be seen as just a touch incestuous.

Sunderland’s selection of reviewers illustrates the ABC collective mind: legitimate views from right of centre are beyond his imagination. His sample found the film awesome (with quibbles about lack of fresh agitprop) and therefore “the actual content of the new movie was sufficiently newsworthy” for the ABC to tout.

Sunderland then wonders if the uncritical mass of ABC interviews of Gore “result(ed) in disproportionately representing a particular perspective”. No, he finds. And on the warming catastrophism  hypothesis, he writes with straight face

Our coverage, like that of other media outlets, has included a wide range of other perspectives to ensure appropriate impartiality.

In the real world, the 2015 CSIRO poll (p4) showed that 54 per cent of Australians don’t buy the human-caused-warming story. There is no hint of this vast demographic in Sunderland’s “ diversity”.

Concurrently with Gore’s 2017 tour, the world’s top-rated warming sceptic, Marc Morano, also visited Melbourne to push his own film, Climate Hustle. Morano launched his film on Wednesday night (July 12) and Gore launched his on Thursday morning (13th). I got to both . Morano tried to give Gore the Hustle DVD, but Gore’s minders shut down this promising conversation. Gore’s security people physically stopped audience members and a Herald Sun photographer  taking pics and recordings during his speech. They missed me and I posted a full transcript on Morano’s New York blog.

Strangely the ABC which “presents a diversity of perspectives” and never knowingly downplays a legitimate point of view, did not interview Marc Morano in Melbourne. Morano was interviewed by Andrew Bolt and Alan Jones, but the rest was silence. Nature journal has ranked 386 sceptics globally and placed Morano at No 1[6].

Sunderland, “having ascertained that Al Gore’s views were newsworthy and the ABC’s coverage of them was not disproportionate”, moves on to whether eight duplicate interviews robbed other ABC programs of resources.

Sunderland found that overall, the seven news interviews were duplicates except in style and “chatty non-material issues such as Al Gore’s more general views on President Trump…and whether he might make another movie in another ten years’ time.”

Sunderland, with 30-plus years at the ABC and SBS, knows how interviewees manipulate their interrogators. Gore has a sheaf of “talking points” which he “repeated in all the interviews”. Sunderland reconstructs Gore’s cheat sheet from regularities in the interviews. One staple is “comparing the spin used by climate change sceptics now and the tobacco lobby in the past (used in four out of the seven interviews).” That canard is of course from the crazed Naomi Oreskes’ Merchants of Doubt book of 2010.

Other Gore porkies include

“The price of electricity from solar and wind, and now the price declines in battery storage and efficiency improvements of all kinds – these are economic realities that are really kicking in in a very powerful way. (used in 6 out of the 7 interviews)”.

# “In the last decade, the climate-related extreme weather events have become much more common, much more destructive” (used in six out of the seven interviews).

My Fact Check: Take just one of dozens of examples – “…as far as the climate scientists know there is no link between climate change and drought.” Andy Pitman, Director, ARC Centre of Excellence for Climate Extremes, UNSW.[7]

There is no mention by Sunderland of any ABC interviewer challenging Gore’s mendacious cheat-sheet claims.

He finishes with one-hand/other-hand conclusions. Gore swamped all interviews with his talking points, so there was indeed ABC duplication. But the plethora of interviews earned a lot of “localisation” brownie points for state programs and personalities. Both Sunderland and Michelle Guthrie, then the ABC’s managing director, urged more coordination and rationalization, but neither showed an awareness that Gore is a hypocritical money-grabbing driver of the climate-apocalypse bandwagon.

[1] Date aired by ABC; they were all recorded earlier about the same time

[5] “Climate change is a critical global challenge, which must be addressed by all parts of society. The resources industry is committed to being part of the global solution.”