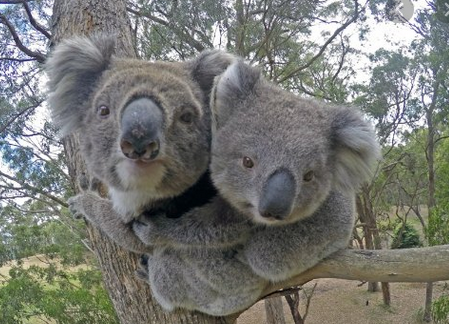 In my book, The Great Koala Scam, I make the following observation.  “Koalas are a rare species in healthy forests. Where they are plentiful, their numbers must inevitably crash, and fires will inevitably explode.”

In 2019, I gave evidence to this effect before a NSW parliamentary inquiry examining koala populations and their habitat, also providing photos of a young male koala in a chronically declining forest south of Eden, where the “experts” say koalas are extinct. I explained to the committee that they are actually irrupting in that area because the declining trees are constantly turning over soft young foliage that is highly nutritious and palatable to koalas. My photos illustrated heavy litter and lack of green vegetation — biodiversity, in other words — on the ground and a dense, tall shrub layer with suspended dry litter reaching into the thin tree canopy.

I explained that these explosive, three-dimensionally continuous fuels would feed unstoppable firestorms and ember showers when ignited during severe weather. This came to pass on New Year’s Eve and the nearby town of Mallacoota was devastated. The highway was closed for weeks, but after it reopened, I went back to the same spot and photographed exactly the same scene as before the holocaust. I provided ‘before’ and ‘after’ photographs of the same stand of trees. The committee didn’t publish them in its report, released on June 30, which contained only this reference to my evidence:

His evidence was that grazing, burning and logging keeps forests healthy and thus, increases koala populations.

I suppose I should be grateful that no more of my evidence was misconstrued. The committee’s findings indicate that the mainstream parties – Red, Green and Blue — are of a single mind on environmental management. As a consequence koalas, and the very bush itself, face a grim future. However, as an irruptive species, the koala is in no danger of extinction.

As I told a reporter upon the 2017 publication of my peer-reviewed paper in the CSIRO journal Wildlife Research, “We don’t need to manage any individual species. We need to manage the bush properly. If we can restore healthy bush we will restore sustainable low-density koala populations. The idea that you can take a piece of relatively undisturbed bush and put a line around it and call it a national park and everything is sweet — it just doesn’t work.’’

Unfortunately, the committee was gulled by the usual suspects, most particularly those imbued with a dark green romanticism that subscribes to the view that the bush, left to its own devices, will “revert” to a pristine wilderness — a wilderness that has not existed since indigenous hands and fire sticks changed the landscape forever.

Below are the inquiry’s findings and my commentary on them:

Finding 1: That, following the 2019-2020 bushfires and the general trend of population decline, the current estimated number of 36,000 koalas in New South Wales is outdated and unreliable.

Koala experts, by their own admission, made up the numbers: “A quantitative, scientific method for deriving estimates of koala populations and trends was possible, in the absence of empirical data on abundances.”

Finding 2: That, given the scale of loss to koala populations across New South Wales as a result of the 2019-2020 bushfires and without urgent government intervention to protect habitat and address all other threats, the koala will become extinct in New South Wales before 2050.

The 2019-20 gigafires show that creating national parks does nothing to protect koala habitat. In fact it is quite the reverse. Frequent mild burning is needed to protect all habitats. Koalas are of the least concern because they are an irruptive species that bounces back quickly from high intensity fires. For example, populations irrupted within two decades of the 1977 wildfires in Sydney’s water catchments and the 1980 wildfires near Bega.

Finding 3: That logging in public native forests in New South Wales has had cumulative impacts on koalas over many years because it has reduced the maturity, size and availability of preferred feed and roost trees.

In 1991, scientific research on the north coast showed that koalas were associated with dense regrowth forests created by intensive logging.  By 2017 koalas had increased in declining, unburnt and unlogged forests so that they were in unnaturally high densities right across the region.

Finding 4: That the fragmentation and loss of habitat poses the most serious threat to koala populations in New South Wales.

This poses the question: Why then did the inquiry find that they have suddenly become extinct in The Pilliga, where they were supposedly protected in a huge reserve?

The answer: They were in unsustainably high densities and, inevitably, those populations crashed during the Millennium Drought, just as they had previously done in droughts around the Great War. That was the first time they supposedly became extinct in The Pilliga.

Finding 5: That the future of koalas in the wild in New South Wales cannot be guaranteed unless the NSW Government takes stronger action to prevent further loss of koala habitat.

In 1844, naturalist John Gould reported that koalas were “nowhere very abundant” and could “rarely be detected”. He predicted their extinction. Instead, they increased in the dense young forests that grew up with disruption of Aboriginal burning, and they moved into woodland pastures, with declining trees, where they had not previously occurred. Within 30 years they were in plague numbers and suffering malnutrition and disease. An export fur industry developed as a consequence.

Finding 6: That climate change is having a severe impact on koala populations by affecting the quality of their food and habitat.

Koalas have survived massive changes in climate since Aborigines shaped the current landscape and exterminated the megafauna about 40,000 years ago. The quality of food for koalas temporarily increases as trees decline with lack of mild burning, because of the increasing turnover of soft young foliage. Declining trees lose their natural resilience because their roots deteriorate with soil changes in the absence of burning. The trees and the koalas eventually crash, as they did during the Federation Drought, when koalas first ‘became extinct’ in NSW.

Finding 7: That climate change is compounding the severity and impact of other threats, such as drought and bushfires, on koala populations.

Irruptions of koalas and gigafires are both consequences of lack of frequent mild burning. During the Settlement Drought, Aboriginal fires were burning as always in clean, open sandstone country to the northwest of Sydney and Parramatta. During periods of extreme weather equal to our Black Summer, settlers were able to control fires at Sydney and Parramatta with green branches. But, despite having columns of firetankers and squadrons of waterbombers, we suffered the largest-ever fire from a single (natural) ignition at Gospers Mountain last season.

Finding 8: That the current exclusion fence for Appin Road in South Western Sydney is counterproductive and poses a serious danger to koalas.

Finding 9: That local koala populations face different threats of varying severity, depending on the region that they are located in.

All wildlife populations face the same threats as a result absent ecological maintenance by means of frequent mild burning. However, koalas are in no danger because they are an irruptive species.

Finding 10: There has been a substantial loss of both suitable koala habitat and koalas across New South Wales as a result of the 2019-2020 bushfires. An estimated 24 per cent of koala habitat on public land has been severely impacted across the State, but in some parts there has been a devastating loss of up to 81 per cent.

There has been a substantial loss of koalas, but habitat will increase as a result of soft young growth after high intensity fires. Koalas will irrupt again, just as they have in the past.

Finding 11: That the NSW Koala Strategy falls short of the NSW Chief Scientist’s recommendation of a whole-of-government koala strategy with the objective of stabilising and then increasing koala numbers.

The strategy of stabilising and increasing numbers is not only inappropriate, but unachievable. Reduced numbers are a precondition for stability and increased numbers are clearly shown by history to be unsustainable. This has been evident in Victoria for more than a century and was confirmed by recent crashes of unsustainably high populations in The Pilliga and The Koala Coast during the Millennium Drought.

Finding 12: That the NSW Koala Strategy fails to prioritise and resource the urgent need to protect koala habitat across all tenures.

All wildlife populations across all tenures face the same threats to their habitats as a result of the lack of ecological maintenance by frequent mild burning. However, koalas are in no danger because, as I must repeat, they are an irruptive species.

Finding 13: That allocating $4 million over a 5-year period for the government’s Saving Our Species Iconic Koala Project has been important, but additional funding and support is required in order for it to achieve its stated aims.

It’s ironic that $4 million is also being wasted on fire research by academics at Wollongong University, opposed to mild burning, who don’t understand its critical role in maintaining habitats for all species.

Finding 14: Translocation is an unproven way of protecting koala populations from the impacts of development and should only be used as a last resort. Further research needs to be undertaken to assess its methodology and effectiveness.

Enough research has already been done to prove that translocation does nothing for koala conservation and, more than that, is actually cruel. For example, 42 per cent of koalas moved from the Coomera shopping centre development on the Koala Coast died in their new home and 50 per cent of the overcrowded koalas that weren’t moved perished in their old home.In South Australia more than 1,100 koalas have died within a year of being translocated from Kangaroo Island to the mainland.

Finding 15: Approvals by the Department of Planning, Industry and Environment of comprehensive koala plans of management made by local councils have been too slow. There is an urgent need for them to be approved in a timely and transparent manner.

Rather than quickly approving more inappropriate plans, there is an urgent need to reform planning. It should be based on fair-dinkum science, not the green propaganda and junk science that underpins the Koala Inquiry Report.

Finding 16: Protecting koala habitat is hampered by the inconsistencies and disconnection between the different planning instruments within the NSW planning system, and there is an urgent need to address this.

There is a consistent problem right through NSW planning system because it is based on the Wilderness Myth. It doesn’t recognise that our ecosystems were shaped by people 40,000 years ago and maintained by mild burning until whitefellas came along and disrupted it.

So, with a grim predictability, the inquiry has produced a report replete with recommendations that, at best, will do no good while further sidelining hope of a healthy bush. We can restore healthy, safe, diverse and resilient landscapes across Australia by frequent mild burning. It would cost a small fraction of the billions of dollars being wasted on futile emergency response, research, ‘conservation strategies’ and green energy.

Vic Jurskis is the author of  The Great Koala Scam, which can be ordered here