Dr Andrew Glikson still misses the point, and backs his arguments with weak evidence and logical errors. Instead of empirical evidence, often he quotes authoritative reports written by glorified committees. He sidesteps around the central issue—where is the evidence for the positive feedback assumed in the models? This feedback creates the disaster. If the “hot spot” is missing and feedback is negative, almost everything else is irrelevant. Glikson serves the Australian taxpayer, yet gives us only half the story.

Throw away your thermometers, we found the “hot spot” with wind-gauges!

Glikson claims Sherwood 2008[i] found the hot spot, but there are no such grand claims in that paper, and nor do the graphs he selected support it. Possibly Glikson meant to refer to another Sherwood paper (Allen and Sherwood 2008[ii]) where they just threw out the temperature measurements holus bolus and used wind shear analysis. 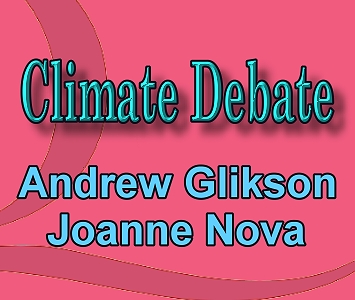 Despite the creative effort, all they achieved was to find results that fall within the wide error bars of possibility. This is after nine years of efforts in re-analysing the radiosonde data. Clutching at straws anyone?

The temperature sensors on weather balloons are individually calibrated to a tenth of a degree, the hot-spot is at least 0.6°C, and there have been hundreds of thousands of measurements, so why throw them all away? As I wrote in the Skeptics Handbook: “Thermometers ferrgoodnesssake are designed to measure the temperature. Why should wind-gauges accidentally be better at it?”

Of the four main data sets (two satellites and two weather-balloon sets), three are in good agreement with each other, and their results unequivocally say that there is no “hot spot”. (See fig 1). One satellite set (RSS) got results that slightly overlap with results from some models. That’s as good as it gets for the models.

Glikson apparently doesn’t understand the power of the feedbacks in the climate models and the meaning of the hot spot. His response is tortuous. He mistakenly infers that if the hot spot is missing there could be no global warming. It’s a strawman that tells us he doesn’t understand the chart. The hot spot pattern is meant to compare trends between the air 10 km up and the surface, not absolute temperatures. And I’m quite consistent in saying that man-made warming is probably real but minor. I provided two references suggesting it is in the order of 0.5°C of warming instead of 3.5°C. Yes, CO2 causes warming, but how much? If either of the papers I listed is right, you can kiss goodbye to the catastrophe.

Glikson then digs deeply into the handbag of IPCC quick-fix-glue and resorts to the ritual lines about how the IPCC has “looked at every possible cause” and ruled all the rest out. It’s known as argument from ignorance: we can’t think of anything else it could be. Never mind that they are searching for answers with the same models that can’t “find” the Medieval Warm Period, the Roman Warming, the cause of the Little Ice Age, the warm period in the 1940’s, or the cooling of the ‘50s and ‘60s either. Never mind that even the IPCC admits they can’t model cloud cover well, and can’t explain why there’s been no statistically significant warming since 1995.

When you look everywhere with a blindfold on, the only thing you find is darkness.

Glikson criticises me for looking at sea level data from only the last 20 years, but he forgets that I did that in response to his claim that things are “worse than the IPCC predicted”. The IPCC remember, was created in 1988 and so his idea of using a sea-level graph back to 1900 rather misses the point. Sure sea level trends increased in the 1930s, but if that trend “shocks” the researchers in 2009, that isn’t a point to brag about. Obviously the claim that sea level rise is worse than the IPCC predicted was shown to be patently, obviously wrong by the graph I posted in my last piece. Sea levels have risen, but the trend has not accelerated at all since the IPCC was formed. Indeed it seems to be flattening off, something that Glikson also did not disagree with.

There’s no reason to look back 100 years and pretend to be shocked in the last two years that things got worse than you thought–80 years ago.

Cause and Effect goes AWOL

Every other point that Glikson makes (sea levels, ice sheets, and Greenland melt extents) are all effects of global warming and don’t tell us anything about the cause of the warming. But they do at least tell us that the warming started a century before our carbon emissions began to rise, which rather puts the kybosh on the recent correlation with CO2 in any case. Sure, let’s talk “long term”: sea levels have been rising since 1850, and glaciers have been melting since 1800. We’ve been recovering from the Little Ice Age for 200 years. Fully 70% of the carbon that’s “Man-Made” has been made since 1945 and the trend hasn’t changed. (Fig 2)

I claimed that fears about acidification are theoretical rather than observed, and to back up my point Glikson links to a summary statement from a symposium. It’s yet another committee report, and not empirical evidence.  When a researcher recently did the hard yards of actually bubbling CO2 through corals in a tank, and also analyzing sediment cores, she and her team found that in the last 220 years as CO2 levels increased the average cocolith mass grew by 40%.[iii] Far from inhibiting coral growth, warmer temperatures and increased CO2 has apparently helped corals.

Her results were different from others because she used CO2 to increase the acidity, rather than throwing hydrochloric acid into the tank as people had previously done.

Did the cryosphere melt?

Glikson originally talked about Arctic sea ice, which was not only irrelevant in a discussion about the cause of global warming, but was misleading because Antarctic sea ice has grown, and globally the levels peak at the roughly the same size each year. Glikson  doesn’t disagree with this, but oddly calls the Arctic shrinking a “decline” and the Antarctic increase a “fluctuation”. He shifts topic and suggests the ice sheets on Antarctica are losing ice mass. But Wingham et al found that Antarctic ice appears to be thickening by around 27Gt ± 29 Gt /yr, resulting in a slight reduction in sea-levels.[iv] That “partial offset” in East Antarctica that Glikson quotes looks like it’s larger than the trend it is “offsetting”.

Will the plants wither? Not likely…

I linked to hundreds of studies showing plants prefer higher CO2 levels, and Glikson quotes a study that “expects” CO2 “may” inhibit plant growth when combined with all the other projections that the unvalidated, flawed models project. I’m warned to consider complex whole systems, not just single variable studies. Righto. Let’s do that: satellites record that the biomass of the entire planet increased 6% from 1982 – 1999[v]. (Six percent in just 18 years!) So, all that warming and an increase in temperatures worked out just fine for life on Earth.

Are these CO2 levels “unprecendented”?

Glikson refers to studies from millions of years ago when CO2 levels were equivalent to today, but temperatures were even higher. The big problem with these studies is that we know higher temperatures cause CO2 levels to rise. There is 50 times as much CO2 in the oceans as there is in the atmosphere, and it’s simple chemistry that the oceans release CO2 as they warm. So again, as with the ice cores, the cause and effect link is most likely the reverse of what he and Gore imply. If it was warmer back then, there would have been more CO2 in the atmosphere. It’s no surprise at all that the CO2 was higher at the same time as the temperature was as well, indeed it’s utterly predictable.

Glikson reckons the credibility in science lies with “respected authorities” (are there any left?). It’s a naked fallacy of logic. Credibility in science lies with those who have evidence and don’t break laws of reason. It’s judged by how well the theories predict the real world. Empirical evidence is what makes or breaks it, and the bigger predictions of man-made global warming have been busted.

Glikson mixes up cause and effect. He pays lip service to my comment that sea-level, glaciers and melting ice are effects of warming, and don’t tell us what caused the warming. But having done that, in the most fitting of ironies, without even blinking, he finishes up with claims that the ClimateGate emails don’t detract from the reality of ice melting and seas rising and all those nasty storms. For once he’s right, those emails don’t detract at all from all the irrelevant, distracting discussion points out there. (But why say it?)

He wonders how much evidence I need? I want evidence that sheds light on the cause. I need a bit more than one study where wind-gauges pretend to be thermometers, while the thermometers apply for a redundancy package. Is that too much to ask?

Thanks to Baa Humbug and DE for advice and research 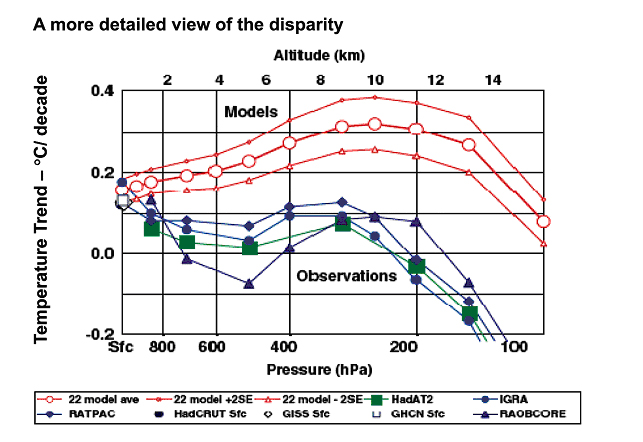 A more detailed view of the disparity of temperature trends is given in this plot of trends (in degrees C/decade) versus altitude in the tropics [Douglass et al. 2007]. Models show an increase in the trend with altitude, but observations from balloons and satellites do not. Graph thanks to NIPCC. 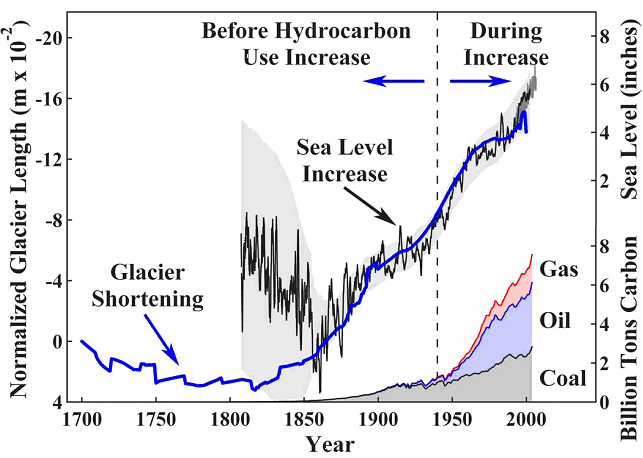 Glacier shortening  and sea level rise. Gray area designates simulated range of error in the sea level record. These measurements lag air temperature in creases by about 20 years. So, the trends began more than a century be fore in creases in hydrocarbon use. GRAPH from the global warming review by Robinson, Robinson and Soon.

The triumph of the individual over the hive mind

The Head-Shrinking Scourge Of Sceptics