Yesterday I visited John L. Daly’s tiny office where he lived on the outskirts of Launceston. It is about the size of two telephone boxes. His wife, Amy, has kept is just as it was when John died in 2004. His computer, his files, the maps on the wall — his notes, letters, photographs and dairies. She has also kept alive his web-site which he was still updating at the time of his death. 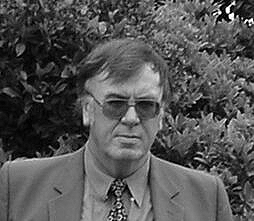 Looking at his scientific work today gives an insight into why the people at the IPCC (Intergovernmental Panel on Climate Change) and the University of East Anglia’s Climatic Research Unit were so annoyed with Daly’s work and why he was such a thorn in the side of their climate theories and research.

Daly was a pioneer in the questioning of global warming theory when the rest of the world was taking little interest in the issue. In the year the IPCC was formed under the shelter of the UN (1988), and a year before Margaret Thatcher gave the IPCC her blessing, Daly was writing a scathing book on what he called the myths and politics of the Co2 scare campaign.

Entitled The Greenhouse Trap— Why the greenhouse effect will not end life on earth., the book, published in 1989, clearly laid out what would be the crucial arguments later presented by the IPCC. To each and every argument Daly countered with his own arguments, questioning the “orthodox” science.

He was perhaps the first to point out and identify, in his book, what he called "The Armageddon Syndrome", "The False Prophets", "The Cult of Experts", "The Science of Non-Communication" and pounded away at "The Burden of Proof". His chapters on "How Nigh is the End" and "Spotty Sun, Pimply Earth" and "The Ice-Man Cometh" combine a sense of irony with surgically-precise scientific argument.

His charts and diagrams look eerily like those presented today. His predictions of dodgy computer modelling have a spooky ring to the present day questioning of 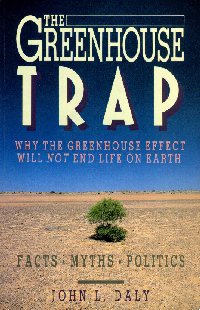 modelling science, and indeed the notion of “self-fulfilling prophesy” that seem to be at the heart of present day scepticism of the IPCC’s modus operandi.

And what John Daly seemed to recognised back in 1989 was that it wasn’t the “almost 90% certain” part of the climate-change science that needed to be examined, questioned and rigorously debated, but the remaining 10% that was in doubt. That 10% of doubt is avoided like the plague, with climate scientists using every available device to stop research and debate. Spin, ridicule, lies, deceit, destruction of evidence, avoidance of oversight and character assassination are now clearly on the record for future historians to mull over.

Name any funding, by any government or academic institution, that is designed to examine the 10% of doubt.

John Daly was born in Bournemouth, UK in 1943. He followed his father’s occupation and joined the merchant navy as a radio officer in the Blue Funnel Line. He and his family migrated to Tasmania in 1980 where he eventually became a lecturer in economics at Launceston College. In a kinder age he would have been considered a ‘Renaissance Man’ being self-taught in a range of earth and climate sciences. No-one financed John L. Daly’s research. It all came out of his weekly wage.

Daly’s last great battle with the “science-is-settled coalition” was over a small line and arrow carved into a rock on the shoreline of the Isle of the Dead, at Port Arthur, Tasmania. It was placed there by the Antarctic explorer Captain James Clark Ross in 1841 to mark the Mean Sea Level in Tasmania.

The marking venture was approved, curiously, by the Governor of Tasmania at the time, Sir John Franklin. Franklin was later to become the Arctic explorer who died trying to find the Northwest Passage.

Daly’s research uncovered flaws in claims made by scientists that the Isle of the Dead base-line mark proved a rapid rise in sea levels. Daly showed this to be wrong. Scientists then tried to claim that Ross was marking the high tide level. Again Daly proved this to be wrong. The latest claim by climate scientists is that the Isle of the Dead is “Rising” up out of the sea, so the mark is misleading. Really!

After looking at the material that Amy still keeps – the nasty, snide letters and emails from IPCC members and other scientists, the evidence of the endless efforts to destroy his reputation – it seems ironic that the man the IPCC scientists so disliked, and tried to destroy, has now come back to haunt them. The comment by the Chief Scientist at CRU, Phil Jones, on learning that Daly was dead — “… in an odd way this is cheering news” — was not one of the great moments in scientific endeavor.

Daly’s life was perhaps best summed up by Professor Emeritus John Brignell of the University of Southampton who said at the time of his death in 2004:

No matter how long you live on this planet, the shock of sudden death never seems to lose its potency. One moment someone is a vital presence that you are inclined to take for granted, the next they are gone. Daly was the epitome of a new phenomenon of the post-scientific age, a lone scholar with all the traditions of meticulous attention to detail and truth that the word implies, with limited means upholding the principles of the scientific method in the face of adversaries with vast resources. He usually won, but the establishment media ensured that the world never got to hear of it. He was the eternal small boy gleefully pointing out that the emperor had no clothes.

Beset by Flames and Flim-Flammery