Is the Pope a Catholic? 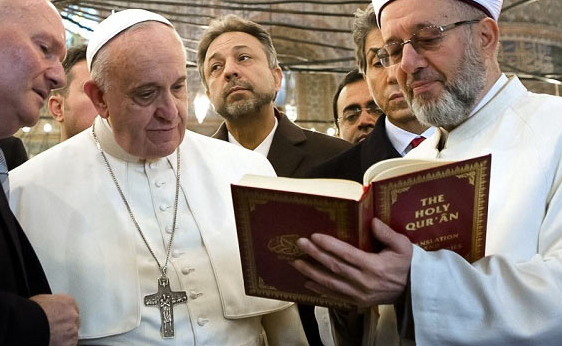 Pope Francis — pontiff #266— has gone woke. For some bizarre reason, he has embraced the spirit of the South American rainforest by including animistic religious rituals in the opening of the recent pan-Amazon Synod (watch the video clip below and be amazed). It has many people seriously asking the question, is the Pope Catholic? Or does he represent something else entirely? As Cathy Clubb writes in The Remnant:

Idol worship was on full display in preparation for the Pan-Amazon synod, with the tacit approval of Pope Francis. Although the Synod hadn’t yet started, the celebration of pagan ceremonies added weight to the concerns being voiced by prominent prelates and laymen that the Synod will be a vehicle for apostasy.

Committed Catholics have been increasingly concerned about many of the Pope’s statements regarding divorce and remarriage, homosexuality (‘Who am I to judge?’), capital punishment, the existence of hell, and even the re-wording of the Lord’s Prayer. But the current document goes even further and comprehensively outlines seven key areas of doctrine, as well as a plethora of public actions, that the current Pontiff has been guilty of committing. Here are some of the more notorious examples: 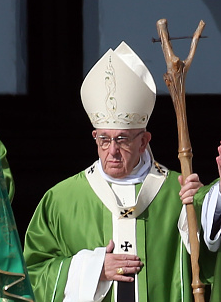 # On June 9, 2014, Pope Francis received the leaders of the militantly pro-homosexual Tupac Amaru organisation from Argentina at the Vatican, and blessed their coca leaves for use in their pagan religious rituals, which involve recognition of the coca plant as sacred.

# Pope Francis has failed to speak a word in support of popular campaigns to preserve Catholic countries from abortion and homosexuality, for example, before the referendum to introduce abortion into Ireland in May 2018.

# At the opening Mass of the Synod on Youth in 2018, Pope Francis carried a staff (right) in the form of a ‘stang’, an object used in satanic rituals.

# During the Synod on Youth in 2018, Pope Francis wore a distorted rainbow-coloured cross, the rainbow being a popularly promoted symbol of the homosexual movement. 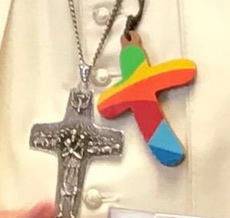 ops in that country, and has ordered a number of faithful Catholic bishops to yield their dioceses to bishops appointed by the state. China is an atheist state that persecutes Christians, and enforces an immoral population policy that includes promotion of contraception, and coerced abortion on a massive scale. This population policy is a high priority for the Chinese government and has caused incalculable harm. Control of the Church by the Chinese government will ensure that the Church in China can offer no resistance to this policy.

I don’t write any of this because I think that my own particular denomination is without sin. Unfortunately, the Presbyterian Church of Australia has had more than its fair share of false teachers over the years. From Charles Strong to Samuel Angus , as well as the more recent heresy trial involving Peter Cameron. So, it’s not like my own denomination is guilt-free in this regard.

But the reason I address this is because it is the responsibilities of leaders to uphold the values of the institutions which employ them. If they can’t continue to do that then they should have the integrity to resign. As Gillette has found out the hard way, once you go woke you quickly go broke. Which is precisely the direction the Church of Rome is heading under its current theologically progressive leadership.

17 thoughts on “Is the Pope a Catholic?”

The Settled Science of Refusing to Debate