A Short History of Climate Hysteria

The Age of Global Warming: A History
by Rupert Darwall
Quartet Books

Ruper Darwall’s The Age of Global Warming: A History is a wonderful book, the best account of the politics of global warming to date — and the best likely to be written.  It is engaging and doesn’t over-reach to become over-worked and tedious.  As someone who has served as a foot soldier in the solar-science trench of the global warming battle for less than a decade, this book filled in a lot of the missing details.

It also offers some new insights.  Environmentalism had a big run up from the publication of Rachel Carson’s Silent Spring in 1962 to the first environmental conference in Stockholm ten years later. During that time, Ronald Reagan, as Governor of California, blocked the building of some dams and highways for environmental reasons, and Richard Nixon established the Environmental Protection Agency in 1970.  Then the Yom Kippur began on October 6, 1973.  Interest in environmental matters as a popular issue was sidelined for some time by wars and oil-supply shocks.  Nevertheless, notions of wealth redistribution from OECD countries to the Third World continued to be generated, their rationale based on the novel concept of “environmental justice”.  The movement thrashed around until it lit upon the issue that would take it mainstream.  Initially, the health of the oceans was promoted as the big concern, but then global warming emerged as the issue able to get the best traction.

One of the missing details that this book fills in is the lack of economic modelling on global warming policies. 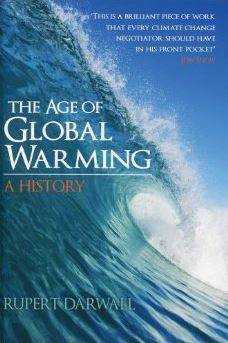 The first governmental review of the costs and benefits of mitigation measures was that of the George Bush administration in 1990.  No other government bothered, being quite happy to sign up to commitments to deep cuts in emissions without knowing or caring about the economic consequences.  That is what I found strange when I got involved in this issue.  Do you remember when Kevin Rudd said that fighting global warming would cost a family just $1 per day, as if they were signing up to a World Vision child sponsorship plan or the like?  Of course the economic consequences have been much more burdensome than that, underwritten by the indisputble fact that environmentalism needs prosperity to flourish.

The first people to lose their jobs in Australia due to the global warming scare were cement workers in Rockhampton.  One of the more recent victims was a restaurant in inner Sydney, where the owners could not afford to re-gas their fridges – collateral damage in the war on Western civilisation.  A warehouse burnt down in New Zealand because the owners tried to save money by switching to a hydrocarbon refrigerant.  The economic consequences are now coming faster and harder.  The Europeans have suddenly become much more aware of what will happen to their power prices under the global-warming legislation they have enacted.  Seemingly none of them did any economic modelling of what would happen.  They were so very happy to sign up to the cause and equally eager to coerce others into committing economic suicide as well. Now the consequences are becoming grimly apparent.

Malcolm Turnbull, a climate change true believer, once said that for global warming not to be true, it would have to be the largest conspiracy the world has ever seen.  Darwall details the first stirrings of that conspiracy in the 1920s, and he tracks its progress over the near-hundred years since.  Did the scientists actually believe the theory they were advocating? It seems they did and simply cooked the books to show that it was happening, fervently believing reality would eventually catch up with their projections.  Gaia had other ideas, however. The planet has refused to warm for very nearly two decades, and there is a growing body of evidence and observations that suggest we may actually on the brink of global cooling.

For those thoroughly bored with global warming, Darwell’s book still represents a very good read because it shows how public opinion is shaped and prepared for concerted and calculated multi-year campaigns at the international level.  I have heard speculation that “global warming” is to be replaced as a poster issue for the environmentalist cause by the notion of “sustainability”.  One of the first indications that such a switch in emphasis is in progress  was a recent campaign by the NSW EPA against food wastage.  Seemingly, the state agency is reading the cues and reacting to them.

The vast majority of our polity here in Australia are still afflicted by global warming, either as believers or in paying lip service to it.  The country at this juncture is still destined for one pointless burden or the other – be it the carbon tax or “direct action”.  Tellingly, while the new Liberal Government was elected on a pledge to abolish the carbon tax, it has kept the National Greenhouse & Energy Reporting Act (NGER) — the last dark deed of the Howard Government in 2007.  Howard pronounced himself as agnostic on global warming, but for some reason was very efficient at bringing in legislation that paved the way for the carbon tax.  He later rewrote his autobiography to explain that he was panicked by a tidal wave of environmentalism.  It seems Howard thought he would use global warming as an issue to push Australia towards nuclear power.  Instead, he cast himself as another of  Lenin’s “useful fools”.

Belief in global warming has been a litmus test for our politicians.  If they have ever believed in it, or uttered the inane “we have decided to give the planet the benefit of the doubt”, they are fools for being so easily deluded.  Repeal of the NGER is now the litmus test.  If that act is not repealed, then it will be self-evident our current crop of leaders is not serious about Australia’s economic health, national security, liquid fuel supplies and similar grave matters of state.  Our country will continue to suffer until the issue of global warming is entirely behind us.  Reading Darwall’s book will bring forward that frabjous day.

David Archibald is a Perth-based scientist working in the fields of oil exploration, climate science and medical research. He is a Visiting Fellow, Institute of World Politics in Washington, DC, where he teaches a course in strategic energy polic. He is also a contributor to the just-published Really Dangerous Ideas, edited by Gary Johns and published by ConnorCourt. The book can be ordered here.

The climate of bias at Their ABC