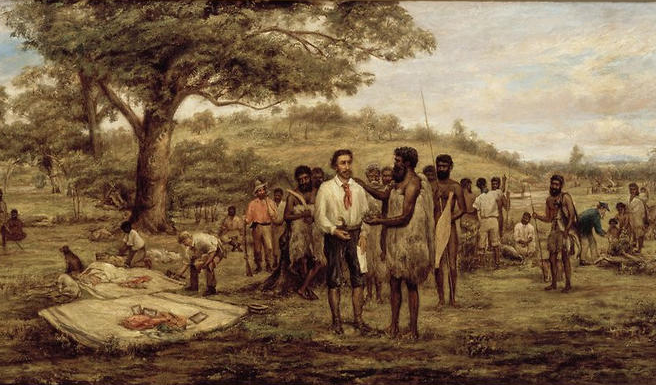 Being a member of an oppressed minority is great.  Well, not so much in China, obviously, but in Australia it’s a doddle.  Take, for example, our ‘First Nations’ people. Not a day goes by that some pitched as designed to allow them to take their rightful place in Australia doesn’t get some prominence in the media. One such initiative is ‘Treaty’.

Promised by Bob Hawke in 1988, it hasn’t yet come to fruition but that is part of its charm.  We all find, from time to time, that once some cherished objective is achieved it loses much of its lustre.  It’s the anticipation and the struggle that really motivates us. But things are now moving on the Treaty front, at least in the People’s Republic of Victoria.

In 2018, the Victorian government, under the leadership of the man who is perhaps the most left-wing premier in our nation’s history, announced that it would negotiate a treaty with Indigenous peoples.  If you Google ‘Victorian Treaty’, chances are, depending on the browser you’re using, the first website that pops up will be that of ‘Australians for Native Title and Recognition’ or ANTaR.   ANTaR describes itself as a ‘national advocacy organisation dedicated specifically to the rights — and overcoming the disadvantage — of Aboriginal and Torres Strait Islander people’.  Its website tells us

The Victorian Government recognises that the Aboriginal peoples of Victoria never ceded sovereignty and that Treaties are necessary to address the wrongdoings of the past. Treaties are an opportunity to redefine the relationship between Aboriginal and non-Aboriginal Victorians.

What instrument has the Victorian government used to recognise that ‘the Aboriginal people of Victoria never ceded sovereignty’, I wondered?  The High Court of Australia, after all, has affirmed that no sovereignty, in the sense that we understand it today, resides in the Aboriginal people. It turns out that the  instrument in question is the Advancing the Treaty Process with Aboriginal Victorians Act 2018. What the Act says is:

So what the ANTaR site claims is somewhat disingenuous. What the Victorian government says is that traditional owners ‘maintain’ that their sovereignty has never been ceded.  Although they don’t claim that the Victorian government actually recognizes Aboriginal sovereignty, their use of the word ‘recognise’ gives the impression that the government acquiesces in this claim and that its actions in negotiating a treaty are based on that premise. The Act established the First People’s Assembly – a body comprising 21 elected members and 11 members appointed by traditional owner groups – whose function, according to the Act is:

to represent the diversity of traditional owners and Aboriginal Victorians in working with the State to establish by agreement elements necessary to support future treaty negotiations.

That seems a pretty limited remit to me so I can’t help feeling the Assembly is getting rather ahead of itself, if this extract from its first Annual Report to Parliament is anything to go by:

The report signals more clearly than ever the new relationship between Aboriginal people and the Parliament of Victoria. Traditional Owners of Victoria have never before engaged with Parliament on equal terms. The Assembly is Parliament’s sovereign equal, comprising democratically elected Members who have been honoured with the responsibility of representing and advocating for Traditional Owners, and the broader Victorian Aboriginal community.

And this little gem from the same document (my emphasis):

This is an historic journey, and all Victorians are walking it together. The Assembly, comprising Traditional Owners elected from every part of this state, recognised by law as equal to government, is ready for negotiations to establish a system for Treaties. Through the process of negotiation we will assert our sovereignty and our inherent rights, including our right to self-determination. This will be an Aboriginal-led process, however Treaties will not be a success without the commitment of both the Government and the Parliament of Victoria. Treaty is a bold concept, but bold concepts are necessary to undo centuries of entrenched disadvantage.

I have the distinct impression that the Assembly is not going anywhere soon.  It will undoubtedly morph into a Voice to the Victorian Parliament, even if a treaty doesn’t eventuate.

The Act identifies parties to the treaty process as:

(a) the Aboriginal Representative Body;

Notably absent from this list, indeed not mentioned at all anywhere in the Act, is the non-Indigenous people of Victoria.  Conceivably, they could be included in category (d) if someone were aware and committed enough to establish a lobby group to represent the interests and views of the majority of Victorians.  But I doubt that they would be allowed anywhere near the negotiating table.  Presumably, Chairman Dan believes he is the people.

I doubt that many see themselves as ‘walking this historic journey together’.  Although, the Treaty was a Labor election pledge, which the Coalition opposed, I doubt that many votes hinged on this issue.  And I suspect even many Labor voters would be surprised to learn that the Aboriginal Representative Body sees itself as equal to Parliament.

But what of the Treaty itself?  What is it intended to achieve?  Well, the Act tells us:

So it seems that Aborigines have carte blanche to develop a wish list of whatever they want while the best outcome ordinary Victorians can hope for is a warm glow.

The Assembly’s first demands include establishment of a Truth Telling Commission and a Stolen Generations Redress Scheme, both of which the government has apparently agreed.  So ‘negotiations’ are obviously going well, then.  A Truth Commission, eh?  Hopefully, Professor Bruce Pascoe, that paragon of post-modern ‘truth-telling’, can find time out from his many media appearances to lend a hand.

Underpinning the process – running through the entire discussion – is the idea that it will lead to Aboriginal self-determination.  But what does “self-determination mean”?  It can best be summed up in three articles of the UN Declaration on the Rights of Indigenous Peoples:

Article 3: Indigenous peoples have the right of self-determination. By virtue of that right they freely determine their political status and freely pursue their economic, social and cultural development.

Article 4: Indigenous peoples, in exercising their right to self-determination, have the right to autonomy or self-government in matters relating to their internal and local affairs, as well as ways and means for financing their autonomous functions.

Article 5 is the clincher, the ‘have your cake and eat it’ clause that all oppressed minority groups need if they are to exercise real self-determination.

At the heart of every hot button Indigenous issue – be it reconciliation, the Voice, constitutional recognition, treaties or any other in a plethora of populist memes – is the concept of Aboriginal sovereignty, which rolls glibly off the tongues of the Marcia Langtons and Megan Davises of this world.  But it is a chimera.  A three-card trick.

What we have here in this First People’s Assembly is an Aboriginal polity, which did not exist in 1788, claiming a sovereignty that did not exist in 1788.  In 1788, what is now popularly and vacuously termed our First Nations comprised a number (300 or so) of distinct tribal groups, each with its own oral tradition and tribal law, spread across the continent and each separated into largely independent clan groups.   Due to geographical dispersion, most tribes could not communicate with other than their immediate neighbours.  When Thomas Mitchell travelled through New South Wales his guides could seldom communicate with the tribes through whose territory they passed.

Aboriginal clan groups exercised a form of governance that was roughly equivalent to local councils today.  That is the sovereignty that was ‘never ceded’.  They never exercised sovereignty over what is now the State of Victoria, let alone the whole continent. In areas where Native Title exists, Aboriginal communities already exercise the degree of ‘sovereignty’ that they had prior to 1788.

This process the Victorian government has initiated and the Indigenous activists have embraced, owes nothing to Aboriginal culture.  It is a product of the very colonisation that these people so despise but without which not one of the 33 members of the First Nations Assembly, judging by their photographs, would exist.

Inasmuch as Aborigines wish to retain their cultural identity there is absolutely no impediment to this, providing that those elements of culture that offend against current norms are jettisoned.  That is, ceremonial and artistic aspects of culture, as well as familial obligations, are fully protected under Australian law.

Rather than being on the verge of extinction, what remains of traditional Aboriginal culture is remorselessly thrust down the throats of the rest of us. The ‘Aboriginal flag’, a for-profit concoction on which royalties must be paid, flies on every public building.  We regularly acknowledge Traditional Owners and are frequently ‘welcomed to country’.  We enjoy ‘You’re the Voice’ in ‘Language’ at New Year’s Eve fireworks.  We have indigenous football rounds.  We have NAIDOC, Reconciliation Week, National Sorry Day etc etc.

Just about everything demanded by the activists — eg acknowledgement of past injustices, an end to racial discrimination, full participation of Indigenous people in the life of the nation etc — where they haven’t already done so, can be achieved by means of normal public policy initiatives.  In fact, the preamble to the Act says:

Through the strength, resilience and pride of Victorian traditional owners, their cultures, communities and economies endure and continue to grow and thrive today. Aboriginal Victorians are an intrinsic and valued part of Victoria’s past, present and future.

So Indigenous communities are not in danger of genocide.  There are major issues confronting some Aboriginal communities, as Jacinta Price has so eloquently argued, but those communities are not in Victoria.  The problems faced by ‘thriving’ Victorian Indigenous communities are more akin to the trauma suffered by Assembly member Sissy Austin, who is protesting the destruction of some trees, ‘birthing’ trees under which generations of Djab Wurrung women are said to have given birth, to make way for an expansion of the Western Highway.  I’m not suggesting this is not a legitimate grievance, but it is exactly the sort of bun fight communities engage in against development almost everyday.  It is part and parcel of accommodating progress with the past.  White society is abandoning its history and values at a rate of knots – witness same-sex marriage, gender fluidity, free speech  etc – because those traditions are now seen as outdated and we have, as they say, moved on.  Christian spiritualty no longer counts for much.  Why should Aboriginal culture be immune?

‘Treaty’ is just grandstanding intended, not to improve the lot of Aboriginal Australians, but to accord them a special place with special rights not available to ordinary Australians.  This Victorian treaty would arguably be unconstitutional, just as is Premier Andrews’ Belt and Roads deal with China.  But unless normal Victorians speak out strongly against this sort of over-reach, rather than trusting an ineffectual Coalition to represent their interests, they are likely to wake up one morning as second class citizens in their own state.

The Voice on ‘Invasion Day’

A blacked-out past — Part III