The Cure for Aboriginal Grievance Syndrome 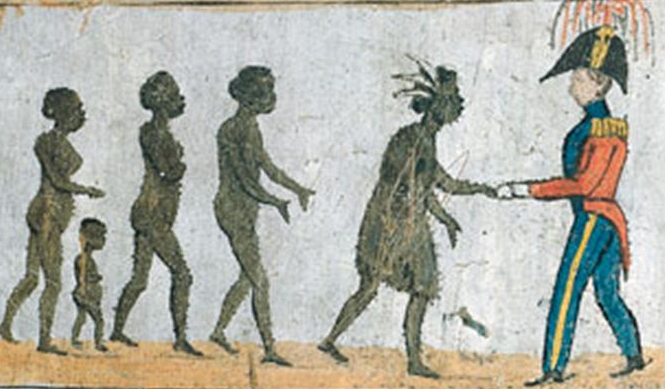 The original inhabitants of Australia were dispossessed of their land and way of life by British colonists. No fair-minded, intelligent Australian of whatever extraction would dispute that assertion, although attitudes concerning the morality of it, or the lack thereof, vary widely. Nevertheless, it is grossly dishonest to pass judgement according to current standards and values on events of two centuries ago. Had Captain Cook not claimed Australia for George III, then French, Dutch or other explorers would most certainly have claimed it for their own kings. That is indisputable by any reasonable standard. It must be noted here that the attitude and conduct of British authorities towards colonised peoples are widely acknowledged to have been far more benevolent than those of other colonising nations.

The preposterous condemnation of events of a bygone era according to prevailing criteria is exacerbated beyond all reason by assigning the hurt and blame to descendants of the original participants, now many generations removed. Not only is this attitude unforgivable due to the glaring injustice to those held culpable in perpetuity, it is also the principal reason why the majority of contemporary Aboriginals continue to suffer the effects of colonisation centuries after it occurred.

Australian society at large can not be accused by any measure of uncaring hardheartedness toward the conditions and circumstances of the descendants of the original inhabitants. Undeniably, the attitudes and actions of colonists, at both individual and government levels, were at times reprehensible, even cruel. Regrettable as those failings were, considering the frailty of human nature, they were all but unavoidable. Those early stains amount to naught compared with the abundance of goodwill towards Aboriginals right from the beginning, rising to ever greater heights over recent decades.

Program after program has been established to improve Aborigines’ lot, costing many billions of dollars over the years. Some were partly or wholly run by Aboriginals for Aboriginals. Some achieved some benefits, but most failed completely. The result to date? Apart from assimilated Aborigines who live their lives much the same as most non-Aboriginals, the lot of the rest has steadfastly failed to improve. Why this complete and never-ending failure? The answer is staring us in the face: the key to the solution is in the hands of the activists, both Aboriginal and non-Aboriginal. What follows is addressed to them.

The foundation to eliminating the disadvantages plaguing contemporary Australian Aboriginals is the full and uncompromising acceptance that the continent was colonised – accepting it without extolling romantic myths and quixotic endeavours to reverse that long-ago, unalterable occurrence. Rephrasing that in the colloquial: get over it. Failing to do so is irrational — indeed, it is insanity — and does great harm to those whom it supposed to help.

Relinquish the notion that it is the responsibility of present day non-Aboriginal Australians to remedy the adverse effects of British colonisation. Such remediation is an impossibility by any and all means due to the utter falsity of the premise on which it is based. It is in the realm of fantasy, together with the concept of a time machine, which would be the piece of essential equipment for its implementation.

Abandon the notion that Australian Aboriginals are entitled to exclusive and perpetual rights and privileges on account of their ancestors living here before white colonists’ arrival. There is neither logical nor moral justification for that stance. Most importantly, it normalises the intolerable concept of there being different classes of Australians with different rights and privileges. That is a malignant cancer eating away at Australian society, rendering truly harmonious coexistence impossible  so long as that mindset prevails.

Cease the glorification and incessant promotion of Aboriginal culture, much of it confected. It is obvious that the culture was perfectly suitable for the life of Aborigines up to the First Fleet sailing into Botany Bay, but what is presented today is a grotesque caricature which fuels a quiet resentment in many non-Aboriginal Australians. The ubiquitous “welcome to country” opening dialogues at almost all public events, usually delivered by professional spruikers for a set fee, are utterly meaningless for most audiences. Smoking ceremonies, performed for fees of up to $8000, are redolent with irony. Is it not bizarre that self-proclaimed atheist social justice warriors, who routinely ridicule Christianity, attend with reverence these celebrations of animism? Worst of all, the relentless exaltation of Aboriginal culture fosters a disproportionate sense of social importance in Aboriginal Australians as distinct from other Australians, enhancing their feeling of entitlement to the benefits and privileges available to them. Their sense of righteous victimhood is also fostered by it. That is hardly the recipe for social harmony. It is also very likely that people with only a smidgen of Aboriginal blood are further motivated by it to flaunt their Aboriginality in order to enhance their eligibility for the advantages that come with the distinction.

How, then, might we begin to solve the problems afflicting Aborigines. The example of how immigrants to Australia coped with leaving their ancestral lands and cultures in order to join our society is well worth considering. Italians, Greeks and numerous other nationalities established clubs based on the culture of their old countries. Historical commemorations, annual balls, literary events and the like were organised; there were language and religious classes for youngsters whose parents their old culture and heritage. But in everyday life they are mostly regular Australians. Their cuisine might be largely from their native culture, but they are grateful to their adopted country for the opportunity of a better lives. There is no reason why Aboriginals could not successfully emulate that example by creating Aboriginal clubs in cities and towns where there might be sufficient numbers of them to make it viable. The Australian government could be counted on to enthusiastically and generously support the idea which would provide unlimited opportunity for Aboriginals to practice their culture to their hearts’ content without imposing it on the general public. Non-Aboriginals wishing to widen their acquaintance with that culture could attend club events to indulge their interest. Such an arrangement ought to satisfy all legitimate cultural needs of both Aboriginal and non-Aboriginal Australians.

A little more needs to be said about those immigrant clubs. They were established following the arrival of a significant number of immigrants from particular countries and endured in proportion to the volume of additional people arriving from the same countries. In the absence of such continuity, most of the clubs diminished or disappeared altogether after the dying out of the first and perhaps the second generation of immigrants. In other words, succeeding generations of immigrants, left to their own devices, usually assimilate seamlessly into Australian society without a pang of yearning for the culture of their forebears. Exceptions to this trend have been rare.

It must be further noted that a sizable proportion of immigrants during the second half of the 20th century were not economic migrants in search of a better life, but desperate refugees following the horrors of World War II and the momentous upheavals that followed over ensuing decades. Their experiences were no less traumatic than those of the Aboriginals following colonisation, although of a vastly different nature. The point being made once again is that the only effective treatment of PTSD begins with the unreserved acceptance of past events without indulging a persistent desire for the reversal of such events.

This is an appeal to Aboriginal Australians at large but especially to their leaders and other prominent persons in their ranks. They, of all people, well educated as they are, would understand perfectly well what is expressed here. Some of them very likely have reached similar conclusions. Others would fiercely oppose the concept on “principle”, also pointing to the achievements of vigorous activism in the past, delivering results such as Mabo, native land title and similar, insisting that the solution to the disadvantages of their kinfolk lies in more of the same, but ignoring the fact that those achievements were not matched by much, if any, improvement in the circumstance. Is that attitude the result of honest conviction or of wishful thinking? Or perhaps of blatant self interest at the personal level? Considering that the lives of the most prominent Aboriginal Australians and their non-Aborigine comrades revolve around Aboriginality and its problems, that last proposition is not without foundation. Should the apparently insoluble problem of Aborigines be solved, the current exaggerated importance of these leaders and others would be drastically diminished. That would have to be a most unappealing prospect for them, wouldn’t it?

The Intent of the Constitution’s Authors