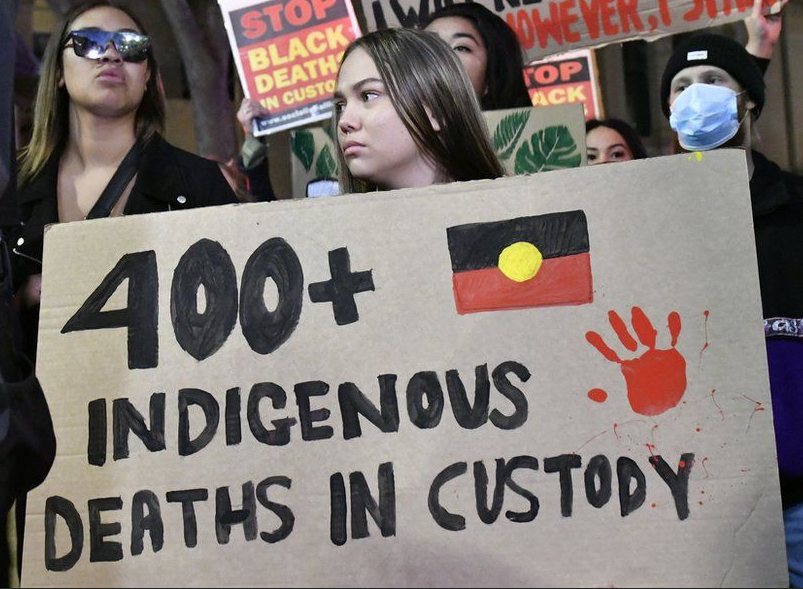 When I saw footage of the tragic and unnecessary death of George Floyd, I knew it didn’t bode well for the cops in America, but didn’t realise it would mean anything to us on the other side of the world. Then there was the COVID-19 shutdown, which increased our workload in some areas, but decreased it in others. There was a lot going on and I just didn’t pay much attention to far-off Minnesota.

The first inkling of trouble came when my 13-year-old daughter became particularly rude and disrespectful, telling me that being white, male and and a policeman defined me as a hateful racist.  It was odd because she spent part of her childhood in Coen surrounded by indigenous people and has met hundreds of coppers.  Indigenous people come to our house to break bread and she played with indigenous kids in our house and their yards.  She is a Cape Copper’s kid whose younger daily life disproved the lie that police and indigenous people see each other as mortal enemies. I dismissed this hint, putting it down to normal adolescent insolence, rebellion and the endless feed of simplistic rubbish she gets from social media.

Tension on the street noticeably ratcheted up.  I felt it going to jobs, especially with Aboriginal and Torres Strait Islander crowds.  Being a Cape Copper I’m not bad reading people and felt something was going on. In the lead up to the protest marches, I was on nights and not watching the media. Relatives and friends encouraged me to log on and tune in.  I saw posturing from the usual suspects.  All of them were jumping on the ‘killer cop’ narrative, but especially bad were ABC, SBS and NITV.

All the pieces started falling into place.  Floyd’s death.  My social media-addicted teenage daughter’s contempt.  The increase in tension and disrespect on the street.  The flurry of official emails about officer safety.  Somehow, for some reason what happened in Minnesota mattered in Far North Queensland. Apparently, deaths in custody was the nexus.

So what had happened since 1991’s Royal Commission into Aboriginal Deaths in Custody. Did things get worse?  Australia has pushed other indigenous issues like Constitutional Recognition, Sorry Day, National Apologies and the Statement From the Heart to the front of the issue queue. I heard a lot of slogans and saw the number ‘432‘ — the number of Aborigines estimated to have to died in custody since 1991 —  thrown around, but I didn’t see any facts.  Checking through media reports, there were no actual breakdowns. Strange that experts in this area, criminologists and statisticians were notably absent from the media’s reporting. I thought that if the killer-cop narrative had any merit they would have been citing hard, solid statistics.  Most academics, especially criminologists in my experience, are lefty types who would defund us if they could.  Were there any evidence that police are on a vendetta against black people they would have produced it.

I turned to Google, apparently a source too obscure for academics and the media. It took me a couple of hours to find, read, cut and paste the following statistics:  of the 432 deaths officially listed as ‘deaths in custody’ since 1991, only 146 were actually in police custody, the rest being in prison and, therefore, in the custody of prison officers, not police.

Of those 146 deaths in ‘police custody’ 39 resulted from motor vehicle crashes as a result of police pursuits.  If police try to intercept a fleeing vehicle and that vehicle is involved in a traffic accident even after pursuit has been terminated, they are technically ‘in police custody’ and the deaths go down as resulting from interaction with police. This is the case even if they are nowhere near a police car and regardless of how much time has expired since the pursuit and attempted intercept were called off. This fact would distort the figure but I can’t say by how much.

Another 31 deaths were due to natural causes, 28 to suicide, and 38 attributable to accidents and misadventure. That leaves just 10 deaths since 1991 related to police action. And something else to bear in mind: anyone who dies within 24 hours of being in a watchhouse is technically counted as being in police custody. So you could be released at night and die the next day from a heart attack but still be listed as having died in custody.

Understandably and rightly, deaths in police custody are both controversial and subject to an intense degree of scrutiny, which is as it should be. After all, the job of the police is to protect life, not take it.  However, sometimes police do need to take lives to protect others or themselves and, at other times, since police action is by nature dangerous and high risk, people die. In nearly 30 years even for the most controversial police homicide, like the death of Cameron Doomadgee on Palm Island, no police officer has been found guilty, despite hyper accountability combined with lawyers, judiciary and human rights bodies that are highly suspicious of police, if not actively anti-police. No one disagrees that the 10 police homicides were awful, but they were all held to be lawful.

To give some comparative context, the most recent paper I could find for indigenous homicide rates was published in 2015, covering July 1989 to June 2012. While murder rates generally have dropped since the publication of this paper and it isn’t a perfect fit, this is very indicative.  In that 23-year period there were

The total number of victims and offenders is greater than the total for homicide incidents because some incidents involve multiple offenders and/or the death of multiple victims. As a quick aside,  look at the paper to which I have linked above and you will notice that about 16 per cent of all homicide offenders are indigenous, which is a disproportionately high compared to their representation in the general population and comparable to the ratio of indigenous people in prison, compared to the general population.

So, 1234 deaths in 23 years compared to 10 in 28 years.  Those 10 tragic police incidents involved officers protecting themselves, defending members of the public, effecting an arrest or in other ways executing their duties.  I don’t know how many of the officers involved in those ten deaths were themselves indigenous.

In regard to imprisonment, in 1991 Aboriginal/Torres Strait Islander Australians accounted for 2 per cent  to 3 per cent of Queensland’s population and around 14 per cent of its jail population.  There has been an increase nationally, to between 15-28 per cent, depending on the state. This is despite sentencing that unashamedly discriminates, giving reduced sentences to indigenous offenders because of their race. The idea that indigenous people are imprisoned because of systematic racism just isn’t supported by the facts.  Indeed, the opposite is true.  Aborigines and Torres Strait Islanders get lesser sentences because they are indigenous. There really is systematic racism, but it’s in the form of ‘positive discrimination’.

The murder rates reveal indigenous people are disproportionately victims of murder and this is true generally for violent crime. Yes, incarceration is a problem — but offending behaviour is a much bigger one. Arguably, the justice system really does fail indigenous people, not because it locks them up but because it doesn’t.  Indigenous victims are ignored.  This neglect, due to race-based ‘positive discrimination’, disproportionately punishes the most disadvantaged indigenous people — women and children.  That grim fact alone is worthy of a protest movement in and of itself.

One more comparative statistic: I don’t know if academics and media fact-checkers are capable of finding this 2018 paper on the website of an obscure organisation called The Australian Bureau of Statistics, but I did find it and it is quite illuminating.  There were 169 Aborigines and Torres Strait Islanders who died from suicide in 2018 alone.  Suicide is the fifth-leading cause of death for Aborigines and Torres Strait Islanders.  In one year alone, suicides were nearly seventeen times the rate of death caused by police action: 169 deaths vs just 10.

Can there be any clearer demonstration that white men in blue shirts are not the threat to black lives?  The idea that cops need to ‘just stop killing people’ is not just a lie, it is a monstrous, vile, contemptible lie. It’s a lie so big even Goebbels and Molotov might have hesitated to tell it, yet the sort of ‘black leaders’ promoted by the media, especially the ABC, SBS and NITV, do not.

Naively, I thought these easily found facts would matter. I thought the pursuit of truth alone would be enough to warrant academics searching for it and the mainstream media reporting it. How wrong I was! This systemic betrayal of truth matters.  That increase in tension and disrespect I see on the street  will result inevitably in more violence, which I am starting to suspect is what the activists and their allies want. I wonder if the liars and fact-averse journalists mean to nurture protests and violence. They are certainly bending to it with a will as regular policing is tirelessly  framed as inherently racist.  Every interaction between coppers, Aboriginals and Torres Strait Islanders is measured not against the law or even standards of acceptable human behaviour, but as indicators of that so-called ‘systemic racism’.

This a catastrophe in the making and tomorrow, in the second part of this series, we will look further at how it is playing out on the street.

Martin Lynch is the nom de plume of a serving Queensland police officer. He contributed ‘Why Alice Can’t Get Ahead‘ to Quadrant‘s October 2019 edition

Rousseau Has a Lot to Answer For