Theatre buff and blogger Kevin Jackson is not one of your more astringent critics, and that good nature is so strong it managed to survive what might have been an otherwise trying night at the Belvoir Street Theatre. The production was This Heaven by up-and-coming Indigenous playwright Niakkiah Lui, recently gifted with a $20,000 Australia Council award.

Jackson reports that the actors did such a first-rate job of conveying the despair, alienation, racism and police brutality that is Lui’s rendering of Aboriginal life in Mount Druitt, it was not until later he came to realise what poor material they had been given to work with.

Here is his summary of a taxpayer-funded plot served with extra helpings of urban grit, rather than the large dose of salt its improbable twists deserve:

Lui will not be too dismayed by Jackson’s quibbles, as most critics have been effusively positive. The Australian’s John McCallum wrote of gaining a fresh perspective on Aboriginal life and of how he now accepts “violent protest as a completely understandable response to the pain and outrage that urban Indigenous people have experienced in the face of the violence that has been inflicted upon them.” 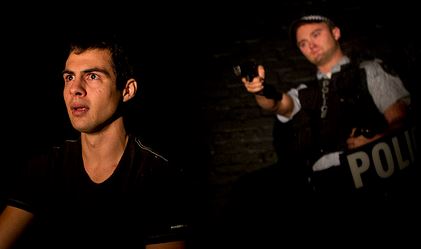 A scene from This Heaven.

At the Sydney Morning Herald, Jason Blake was moved by “passages of searing insight” – although not, presumably, by the wisdom of putting an intoxicated and legally blind youth behind the wheel of an automobile, the device upon which the entire plot hinges.

But the greatest gush came from Crikey’s man in the stalls, Lloyd Bradford Syke:

This isn’t mere political correctness, or bleeding heart leftist posturing. Lui comes from the coalface. She’s been there [Mount Druitt]. She was brought up there. She’s lived it every day of her life. Like the young Aboriginal man I knew who was stopped by police, to be questioned about a nearby crime, despite the fact he didn’t in any way match the description given to them. Perhaps they were colour blind. Or perhaps they need to be. The play, she says, “is about the loyalty of a place and how it can destroy you.”

Ah, that “authenticity”! Reviewers always find it so appealing, but others, who perhaps visit the outer-suburban “coalface” of racial oppression more often, might see the further peddling of some very tired clichés and stereotypes. While Belvoir audiences were invited to indulge in a visceral identification with the downtrodden and hopeless of Sydney’s very own bantustan – perhaps even to share Lui’s vision, detailed in the program, of her play as “my Molotov cocktail. I want to burn things down” — the polls have been showing the federal seat of Chifley, with Mt Druitt at its centre, might very well side with the Coalition come September 14. No doubt this refusal to man the barricades remains a mystery to inner-city luvvies flitting from one tax-subsidised exercise in theatrical agitprop to the next, outrage and tissues ever at the ready for an on-cue snivel at the injustice of it all.

Dramatic emotion is a matter of personal taste, of course, and if audiences prefer the familiar to a less-heard and far more encouraging representation of an authentic Aboriginal life, well that is their perogative. As it happens, that unwritten play would be Lui’s very own story – the real one.

Such a production would have stressed the importance of parental involvement and its effect on children who are encouraged to strive and achieve, for that is what Lui’s own parents did when she was growing up. Interviewed at length by the ABC in 2004, when the playwright-to-be was about to take up a $65,000 scholarship to a Canadian finishing school, they were the picture of a solid, middle-class couple investing time and effort in their kids’ betterment. While the teenage Lui was being shuttled to a Penrith amateur dramatic company, for example, her little sister was getting the coaching and encouragement to pursue her dream of becoming an Olympic figure skater.

As for instilling the value of work, well her parents, Jenny Beale and Jack Gibson, are the only two employees of the non-profit and income-tax exempt Butucarbin Aboriginal Corporation, which last year brought in $251,102 in grants and whose most recent audited report presents a picture of robust financial health. With total operating revenue for the 2012 financial year of $342,888 and net assets of $1,082,856, the couple have built upon the opportunities presented by federal, state and local spending on Indigenous betterment.

Interestingly, Lui’s $20,000 Dreaming Award from the Australia Council’s  was paid to Butucarbin, according to the financial report, and $12,500 of that sum subsequently dispersed. (All of Bitucarbin’s reports, audits, filings and board members can be inspected here)

But who wants to see a play about a talented, intelligent and ambitious young woman from a solid family making all the right moves? As the critics affirm, it is much more entertaining to applaud Lui’s theatrical Molotovs arcing  through the fictional night of intolerance and racial subjugation.

When reality threatens to intervene, the play’s the thing.

A Debate Remote from Reason