‘Stand Up’ and Whine

Did you catch the re-run of Redfern Now episode ‘Stand Up’ on the ABC Sunday night?  No?  That’s a pity.  You missed the inspiring tale of plucky young Aboriginal lad Joel Shields and his courageous stand against oppression. Let me tell you more.

Joel, who lives with his parents in a modest but comfortable house in Redfern, is granted a scholarship at a prestigious private school.  The family, particularly Joel, are excited about the prospect and, on day one, head off across the Bridge in the family Camry to deposit Joel at the imposing sandstone façade of Clifton Grammar, replete with Aboriginal flag flying proudly centre stage.

But the gloss wears off in very short order when Joel finds he is required to stand and sing the National Anthem at general assembly.  He mumbles along for a few bars and then falls silent, which is noticed by Clifton’s head mistress, a cadaverous, heavily made-up, cigarette smoking harridan whose name escapes me, so let’s call her Cruella.

We next see Joel standing alone in the middle of the assembly hall awaiting the arrival of the sympathetic English master, who assumes he doesn’t know the words.  He asks Joel to learn them as homework. Joel returns home and lets slip to his Dad, Eddie, 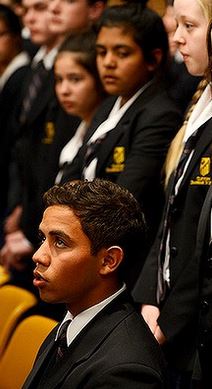 that he doesn’t want to sing the anthem.  Apparently, ‘it doesn’t feel right’.  Eddie proudly encourages Joel to stand his ground, noting that he, himself, has never sung or even stood for the anthem, ‘even at State of Origin’.

Next day, Joel duly complies and after further admonishment — including some sage advice from the school’s Indigenous liaison officer, let’s call him Uncle Tom, to just mouth the words — we see him rejoin class where his burgeoning love interest is giving a presentation on, you guessed it, global warming.  Joel’s parents are called in and Mum, Nic, is supportive of the school’s demand. She puts pressure on Joel to conform, but encouraged by Dad, next day Joel takes it to a new level and sits down as well as refusing to sing (at right).

To cut a long story short, Joel’s principled stand is rewarded with his expulsion, at which point Mum switches sides.  Eventually, all the other Aboriginal students go out in sympathy and refuse to stand for or sing the anthem.  Cruella is outraged but the sympathetic English master breaks ranks, supressing a wry smile and pointing out, with truly Solomonic insight, that ‘it’s only been the anthem since 1985’.

The recalcitrant students are corralled into the assembly room where, despite Cruella’s threats to expel them all, they remain adamant that they will stay out until Joel is re-instated. Cruella succumbs and, in the final scene, we see her arrive in her late model Mercedes at Joel’s house to personally escort him back to school. You get the picture. God forbid that Joel’s superior education should come at the cost of singing the National Anthem.

When I first saw this show a couple of years ago, it offended me in so many ways that I wrote to the ABC to complain.  I got the brush off, of course.  Seeing it again got me thinking about ‘racism’ in a somewhat different way, particularly in view of the push for ‘constitutional recognition’. I’ve argued previously that Australia is not a ‘racist’ country and that, individually, the overwhelming majority of Australians are not racist. But that does not mean that there is no undercurrent of animosity against, for want of a better term, the Aboriginal Establishment and certain of its individual members.

Many Australians are frustrated — indeed, fed up — with seeing, on the one hand, generations of traditional Aborigines falling further and further behind, despite untold billions of dollars spent, oceans of goodwill and the best intentions of legions of politicians, bureaucrats and volunteers. And on the other hand they are appalled by the burgeoning sense of grievance and victimhood on the part of urban Aborigines, even as they enjoy growing prosperity and access to funds and opportunities that are theirs by right of who their grandparents were.

Actually, it’s not the Redfern storyline per se, objectionable though it is, that really upsets me.  The plot is, after all, highly contrived.  There may be a Clifton Grammar-style school out there, and there may even be kids who won’t sing the National Anthem (Ahmed, perhaps?) but I doubt very much that its headmistress, gimlet-eyed though she may be, would make this such an issue from day one.  She would probably counsel the kid and let the influence of the school have its effect over time.  I  doubt it’s a situation that has confronted any real Aboriginal student in real life.  In other words, it’s a strawman plot.  No, what really gets my goat is that it was thought worthwhile to waste tax dollars producing this rubbish in the first place.

The whole tenor of the ‘Stand Up’ episode is an upright middle finger in the face of the very same Australians now being hectored to vote to give Aborigines, many of whom owe more of who they are and what they have achieved to their European antecedents,  a special place in our polity by way of a change to the Constitution. I’m willing to bet that the creators of Eddie and Joel, and all who collaborated in the making of this episode and series, are hot for Aboriginal ‘recognition’.  This is the very same Constitution that established the nation represented by an anthem whose lyrics could not possibly offend anyone, other than that they were penned by a ‘whitefella’.

Eddie, Joel and whoever else, you’re entitled to your ‘free speech’ denigration of the National Anthem, but don’t expect to be applauded, except by those who commission ABC dramas and their supplicants, who make grievance their meal ticket and stock in trade.

And never forget — please concentrate here because this is important — the reason you perceive animosity is not that you happen to boast Indigenous genes. No,  far more likely is that what you present as your victimhood is perceived by your fellow Australians as the whining and whinging of shameless bludgers.