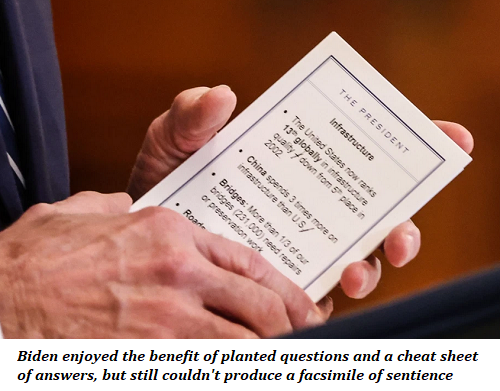 During the US presidential debates of 2020, many across the political spectrum raised questions about Joe Biden’s presidential candidacy and, should he win, his fitness to serve in the Oval Office, starting with what his repeated gaffes and exercises in incoherence said about his mental state and its apparent decline. Beyond that immediate concern there was the blatant censorship and suppression by Big Media and Big Tech of reports about his family’s corruption, all captured in Hunter Biden’s “laptop from hell”, with its windows on sly dealings with China and, just for good measure, explicitly documented drug use, pornographic selfies and home movies of the soon-to-be First Son exploring innovative sexual techniques with what appear to be underage prostitutes.

Does anyone doubt that, were the hard-core content of the abandoned laptop to feature a Republican — one of the Trump kids, for instance — it would have led every news bulletin from sea to shining sea? Instead, only the Taiwanese media presented the laptop footage while the rest of the world’s media yawned and looked away. (editor’s note: the footage is so unsettling Quadrant Online declines to provide a link. The curious and the prurient can find it for themselves.)

Step back from the senile and salacious and the greater worry is that Biden was and remains a Trojan Horse — a useful idiot might be the better term — to advance the agenda of the Democrats’ radical wing. As various commentators on the right side of politics have argued, the Biden administration would be more aptly called the Harris administration. Kamala Harris, along with socialists such as Ilhan Omar, Alexandria Ocasio-Cortez and Rashida Tlaib, constitute the ventriloquists providing the talking points for a President who is very often barely able to string a sentence together without losing the thread.

This was made abundantly clear at Biden’s long-delayed first press conference, which occurred more than 50 days after his inauguration — the longest a president has gone without accommodating the Fourth Estate in 100 years. Not surprisingly, Biden’s rambling remarks, which often vanished into an inarticulate private fog,  affirmed the reality that America’s mainstream media outlets have assumed the role of Biden’s eager press agents. They aren’t there to quiz him but to protect him. Hence, there were no questions about the state of the economy or how Biden’s approach to addressing the COVID pandemic differs from that of President Trump. As to the trillion-plus dollars of reckless spending, presented as the administration’s remedy for COVID’s economic malaise, no reporter 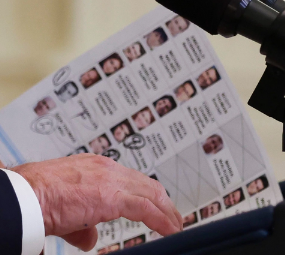 went anywhere near noting that the pork-barrelling package was essentially the Green New Deal, plus much more, cooked up by Ocasio-Cortez.

As a poorly produced theatrical farce, the Biden press conference reached its nadir with questions about the flood of illegal aliens pouring across America’s southern border ever since the inauguration sounded a starter’s gun. With stories of “coyote” smuggling gangs, the involvement of drug cartels, an epidemic of rape and children being housed in overcrowded camps, the assembled hacks could not avoid the topic.  Biden’s responses were erratic, vague and deeply worrying, not least because, as unguarded over-the-shoulder camera shots showed, Biden came prepared with cheat sheets (above). Not only were tame reporters identified in the order they would be asked to proffer their questions, the President’s answers were pre-scripted and recited on cue. Even with that help and a sympathetic audience, Biden still failed to present as anything but a presidential parody. How sympathetic? Watch the clip below.

Moreover, Biden’s press conference answers were littered with falsehoods. A list of the disinformation that flowed from his lips has been laid out by Ian Haworth of the Daily Wire. Truth be told, this wasn’t a press conference — it was, as JP Sears comedically noted, a choreographed dialogue with state media.

Mainstream media outlets have been relentless in presenting Biden as a redeemer delivering America from the grip of the Orange Tyrant. One such memorable instance came when, prior to asking her question, Public Broadcasting Service reporter Yamiche Alcindor gave Biden a tongue bath by presenting the chaos on the Mexican border not as an example of bad policy incompetently implemented but as a testament to Biden’s decency (emphasis added):

Thanks so much, Mr. President. You’ve said over and over again that immigrants shouldn’t come to this country right now; this isn’t the time to come. That message is not being received. Instead, the perception of you that got you elected — as a moral, decent man — is the reason why a lot of immigrants are coming to this country and entrusting you with unaccompanied minors.

There is comfort, a small measure, in knowing that such sycophancy turned the stomachs of a few left-leaning pundits and columnists. Take Matt Taibbi as one of those rare examples of journalistic integrity. Taibbi likens the ‘phony objectivity’ of mainstream media outlets to USSR-era Pravda, which tirelessly legitimised one-party orthodoxy, promoted a near-religious faith in the wisdom and goodness of the reigning authoritarians and denounced as enemies of the state any and all those who begged to differ. Taibbi appropriately refers to the US version as the “Sovietisation of the American Press.” While the US may not be an authoritarian state at present, Taibbi warns that it may soon descend into one, primarily through the stranglehold on the distribution of information. Never forget, it was Twitter that decided voters had no need to be informed of Hunter Biden and arbitrarily banned all mention of him and it, even to the extent of suspending the New York Post‘s right to post links to its stories on the hard drive’s contents.

Alas, the same media that sniped and bombarded Donald trump with concocted ‘gotchas’, from the Russiagate hoax to asserting that he wished to see Americans drinking fish-tank cleaner and shooting themselves up with disinfectant, is ‘all in’ for his successor. Until the cues come that it is time to replace him with Kamala Harris, there will be no mainstream media coverage of his decrepit mental state and follies, starting with the catastrophe unfolding on the desert body to the south. The truth is that Biden has given the world no reason to believe he is more than a puppet. When the crunch comes, as it always does when official incompetence collides with reality, it will be the press corps’ lickspittles who must share the blame.