The Epidemics That Ravaged Post-Contact Aborigines 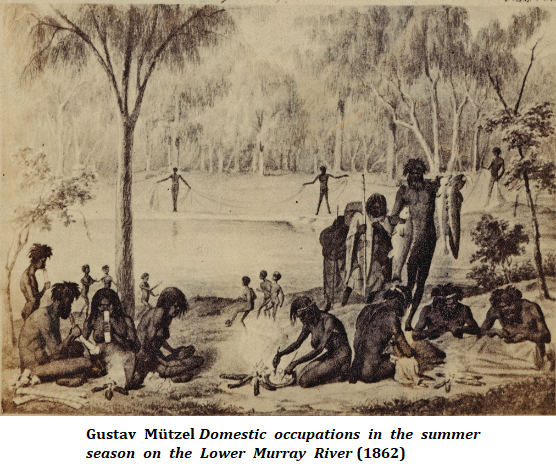 In the age of COVID it should be remembered that there have been much worse epidemics and pandemics. If the colonial era Aborigines had survived and reproduced at the same rate as their white contemporaries, they would number several millions today in a very different country.

Fatal Contact – How Epidemics  Nearly Wiped Out Australia’s First Peoples is the dreadful story of how disease,  bringing agonising death to the bush, killed a large part of theindigenous  population between about 1789 and Federation and at a much lesser rate into modern times. Mostly it was due to world, or at least Pacific,  pandemics. Smallpox appears to have been the main killer, but measles, then lung maladies like influenza. pneumonia and tuberculosis, also had a lethal impact. This vast, tragic story is reasonably well known, but does not lend itself to media attention and has been unpopular with academic historians, partly because it can be technically difficult, but also because the main interest is on more clearly anti-colonial themes and massacres. 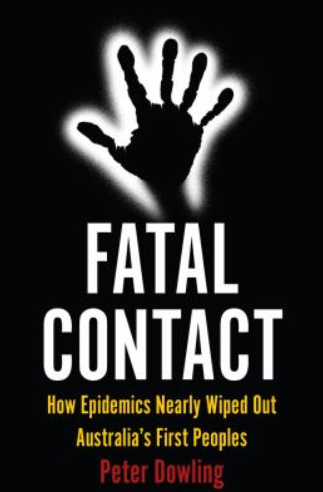 The background  of Peter Dowling’s Fatal Contact is as much in archaeology and biological anthropology than Australian History and has a strong medical and scientific component. Its general content resembles that of Judy Campbell’s Invisible Invaders – Smallpox and Other Diseases in Colonial Australia 1780-1880 (MUP 2002), the only other substantial recent book on Aboriginal illness.

Dowling’s book is meatier and more detailed than Campbell’s and gives more attention to diseases other than smallpox.  He is wary of numbers but also of the 233-year-old debate about the origin of  the smallpox.

On some estimates, savage smallpox epidemics in the 1780s (showing in Sydney in 1789) and again  around 1828-32 and in the remote outback 1860s may each have killed half the Aboriginal population of Australia. They were the biggest influence in reducing it from as many  as a million in 1780  to around 100,000  a century later.  Dowling accepts a 1788 population of “more than  a  million”, though others have respectably estimated it at nearer half that.

The 1789 date of the smallpox outbreak seems to have been a coincidence, not implicating the First Fleeters. The indigenous population  fell to a low of 74,000 in 1933, defined as people of half or more Aboriginal  descent or living in the Aboriginal manner. It then began to increase, and today the Aboriginal population is about 800,000, due in part to much  more liberal definition of Aboriginal in recent times and rapid  growth in the part-European population. The earlier  figures are little more than careful guesstimates-because so little was known of the people or indeed of the country in those distant days.

At least as dire in reducing  population , however, was venereal (sexually transmitted) disease, which was extremely common and caused both lasting agony and destruction of affected women’s fertility. These diseases seem to have been unknown in Austrailia before 1788, but were common among both races after that. Convicts certainly introduced  a big share but it also came from visiting Indonesian fishermen in the north and seamen such as sealers and whalers in the south.

Once introduced, “VD”, as it was known, galloped through Aboriginal society. This is a delicate subject. Dowling mentions “prostitution” but the word is  harsh.  “Lending” of women to visitors in exchange for a gift was customary in traditional indigenous society, seen as socially binding in a thinly peopled land of tiny communities  where women were pledged to husbands at birth, married early and men typically had two or three wives, if not more, who they virtually owned. This was not that different from pre-historic customs elsewhere, but coarsened when the outside world crashed in on an isolated society.

Most of the convicts were young, single men and sexual intercourse with indigenous girls became a way of life, especially on the grazing stations that covered much of southern Australia within about fifty years of the First Fleet.  Most of this contact  was agreed and consensual but enough was outside the rules for it to be a major cause of frontier conflict.

Dowling does not mention this aspect, or that the Aborigines could take murderous revenge on anyone who interfered with their women without male permission and guidelines. Nor does he acknowledge that boss squatters and their sons could be as much involved as a pimply  newly arrived thief from the English slums.

The resulting fatality from VD cannot be reasonably measured. However, in these early pioneering times the steep but seemingly  mysterious decline in Aboriginal numbers, especially of children, was often noted  in private and official records. Severe infant mortality was yet another cause of depopulation.

How much was colonial society culpable for the disaster?

As so often there is a mix of causes, but the overwhelming one was that Aborigines had little or no  immunity to new diseases, especially in epidemic form. This was especially calamitous  with smallpox, the early great destroyer, to which Europeans had long developed substantial immunity. The white newcomers were mostly immune, but smallpox devastated much of the newly discovered Pacific in the same years. Earlier, it’s impact in the colonial Americas had been perhaps even worse.

Dowling  avoids judgment on the origins of the Australian smallpox epidemics but the information he provides suggests it was the long-suspected Indonesian fishermen visiting the northern coasts. There is substantial evidence of visiting seamen from Makassar (a province of  Sulawesi ) carrying the disease and of the indigenous song lines and trading routes that would carry it south. He rejects as scientifically unlikely a rival theory, that the seeming smallpox was actually a chickenpox variant, mutating on the First Fleet voyage. He barely mentions some of the  other theories.

Whites, too, suffered from  diseases other than smallpox,  but far fewer of them and with far less death. Whites had much more inherited immunity and were practiced at avoiding and treating these diseases, in as far as they could be treated at all.

Aborigines only gradually acquired the survival and management  skills. Aboriginal resistance to imported diseases increased over time too, with more survivors acquiring immunity, but new challenges arose. TB became a scourge when the white population ballooned with the Gold Rush. The British fashion of the day for TB treatment was for patients to  take long sea trips and move to warmer climates.  Many of these came to Australia,  germs and all.

As Aborigines spent more time in the towns, alcohol and tobacco became much more available and there was more of it in the bush too; many Aborigines (and whites) became addicted, with yet more  destructive  consequences.

Nearly a century and a half after 1788, the Aboriginal  greater susceptibility to imported disease was evident with the Spanish Flu epidemic that followed  World War 1 and, at the time of writing, Covid’s damage, especially in remote bushland, was feared though still unknown.

How much blame was due to colonialism? Perhaps in one sense all the blame; the common but easy virtuous argument being that “we shouldn’t have been here at all”. In another  sense, not much. Dowling  is at pains to identify and explain the early indigenous vulnerability to diseases to which they had no or weak immunity, due to historic lack of exposure. Other formerly isolated Pacific societies new to the world at large suffered this way too, with death bringing massive loss of population. Government “oppression”, so often suspected as causing indigenous ills, was hardly a factor, but nevertheless – as so often – in retrospect governments could have spent much more, especially on accommodation for the sick.

Dowling presents a grisly picture of conditions for the sick in rough early institutions such as the Wyballenna  refuge for the Tasmanian Aborigines on Flinders Island and new “settlement” refuges in Victoria, when farming took root on the traditional lands.  (He does not mention other problems there, such as the appropriate role for the healthier mixed-race people who were appearing in greater numbers – governments did not want to pay for them;  or  the appropriate treatment of child or polygamous marriage.  Like many historians, he hardly  mentions  the complicating mixed race issue  at all.)

The meagre state of medical knowledge or practice anywhere two centuries ago is  hardly comprehensible today. The  crucial role of germs, for example, was  not appreciated until the middle of the nineteenth century. Until then  doctors still blamed bodily misfunctions, believing the “four humours”  must be in balance, a  belief going back to ancient Greece. “Bleeding” patients was typical treatment.

Dowling says Aboriginal “clever  men” had cures for some the few ailments of pre-colonial times, but for the new diseases people blamed sorcery, variously ascribed to whites, rival tribes or supernatural forces.

The Voice and the End of Traditional Aboriginal Culture

A Lamentable ‘Tendency’ of NT Justice