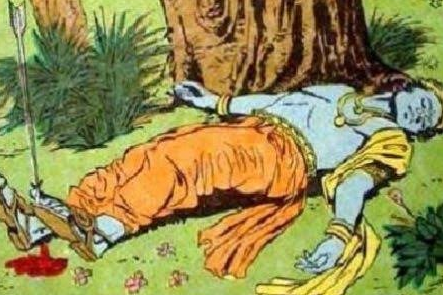 Which came first, the elephant or the horse? The Pratijnayaugandharayana (sorry, but that’s what it’s called) is a classical Indian play that tells the story of the elephant-whispering Prince Udayana of Vatsa, an ancient kingdom in what is now Uttar Pradesh. Speakers of Romance languages will recognise the Sanskrit vatsa as cognate to the Latin vacca, cow. But although Udayana was literally the Prince of Cowtown, it seems he had a thing for elephants. He could pacify the most persnickety of pugnacious pachyderms, mesmerising them with magical spells and charming them with his melodious lute. Having anachronistically hoovered up all the elephants in the vicinity of Vatsa, he aroused the envy of the neighbouring King Pradyota, who coveted both Udayana’s elephants and his kingdom.

Pradyota was unable to confront Udayana in open battle (on account of Udayana holding a monopoly on war elephants), so he consulted that wiliest of all Greeks, Odysseus, to help him form a plan. Or what amounts to much the same thing: he called in his wily minister, Bharatarohaka. A master of deception, Bharatarohaka came up with a fiendishly clever plot to capture Prince Udayana—and no, it didn’t involve a giant wooden horse. It involved a giant wooden elephant. Bharatarohaka built an artificial elephant deep in the jungle, covering it with jasmine creepers and painting it to match the blue-green leaves of the surrounding trees. In it he placed a troop of heavily-armed hoplites, ready to jump out and seize the elephant-whispering Prince Udayana as soon as he got within whispering distance.

The experts—well, the Western experts—say that the story of the Trojan elephant was adapted from the Greek original, mainly on argument that the Pratijnayaugandharayana seems to be roughly contemporary with Alexander’s invasion of India. In fact, we’re lucky to have the Pratijnayaugandharayana at all: the only known copy was discovered in 1909 in a temple at the southern tip of India. If that sounds pretty tenuous, consider the fact that we also have only one original Greek source for the Trojan horse story. It consists of just a few lines from Homer in which Odysseus brags that

When Ilion in the horse received her doom,
And unseen armies ambush’d in its womb,
Greece gave her latent warriors to my care,
’Twas mine on Troy to pour the imprison’d war.

Everything else we know about the Trojan horse comes from Virgil’s Aeneid, which wasn’t written until the time of Augustus. Absent these cryptic lines from the Odyssey, the experts might have traced the Trojan horse back to the Indian elephant. In any case, no one really knows how old the story of the Trojan elephant might be; it might very well predate the version in the Pratijnayaugandharayana, just as the Trojan Horse predates the Aeneid. The Indian version certainly seems more credible than the Greek one: a camouflaged elephant hidden deep in the jungle has something of the ring of reality to it, and soldiers seem more likely to hide in the belly of an elephant than in a wooden horse on wheels.

Of course, there’s no reason to assume that one story is derived from the other, even if they are indeed two versions of the same story. They may both be descended from an even older original. Greeks, north Indians, Persians and most Europeans speak languages that are derived from a common “Indo-European” root language, and thus presumably share a common heritage as well. We don’t have any meaningful records of what Celts, Slavs, or even Persians were thinking more than three thousand years ago, but the Bronze Age epic poems of the Greeks and the Indians have survived. And if you strip out the extraneous details to expose the basic motive forces of their plots, they are remarkably similar.

The first national epic of the ancient Greeks was the Iliad. It is not, as you might have learned in high school, the story of the Trojan war. It is, as its famous opening line makes clear, the story of the wrath of Achilles. The curtain rises on the undefeatable hero of the Greeks, who is angry at being ordered to give up a girl he had won in battle and intended to keep for himself. He petulantly withdraws from the action, leaving his comrades to face their enemies without him. Patroclus, his charioteer, tries to persuade him to return to the fight. Only when Patroclus is killed does Achilles put aside his pride and rejoin the battle.

The equivalent Indian epic is the Mahabharata, literally the Mega-India story. At its heart is the story of Arjuna, who has won a bride in battle but is upset at being forced to share her with his brothers. The undefeatable hero of the Indians petulantly withdraws from the action, leaving his comrades to face their enemies without him. Ultimately it is Krishna, his charioteer, who inspires him to return to the fight. It just so happens that Krishna is divinely protected from harm, his only vulnerable spot being … his heel. He dies from being shot through the heel with an arrow.

Admittedly, the Greek and Indian epics are completely different in the details of their characters and events. But the fact that both civilisations had two (and only two) great epic poems, one the national war epic and the other a hero’s travelogue, is certainly provocative. And the two civilisations shared more than poetry: they also shared politics. The earliest Sanskrit-speaking Indians seem to have lived in city-states much like those of the ancient Greeks, and like the Greek polis, each Indian pura (yes, it’s cognate) originally had a citizens’ assembly, the gan (cognate to the Greek agon, or athletic meet). An ancient Indian city-state ruled by a citizens’ assembly was called a ganarajya (from gan + raj), and indeed the Hindi name for modern India is Bharat Ganarajya—the Republic of India.

Modern Western legislatures are in no way the lineal descendants of the ancient Greek citizens’ assemblies, and neither is present-day Indian democracy the lineal descendant of the ancient Indian ganarajya. But unlike their Western counterparts, present-day Indians live in the same places as their ancient ancestors, worship the same gods, and tell the same stories. Few Western university students even know that an Achilles heel is named for a person, never mind what his name was. They’re more likely to think it’s a kind of tennis injury, or a polite name for a foot fungus. By contrast, every Indian of every age knows that Krishna was Arjuna’s charioteer, and most know the story of the Licchavi Republic, ancient India’s ancient Athens. Modern Indian democracy may not exactly have sprung from these ancient Indian roots, but it is rooted in the same soil.

India may owe its parliamentary system to the United Kingdom, but its democracy is entirely home-grown. To see that, just compare modern India to the three other successor states to the British Raj: Pakistan, Burma and Bangladesh share India’s colonial legacy, but have shown little aptitude for democratic self-government. In fact, India is the only major British colony to have remained a democracy throughout its entire postcolonial history. Due to celebrate its seventy-fifth birthday on August 15, India has the oldest democracy in the entire post-colonial world. It pipped Israel by six months.

And long may it last. If complacency is the Krishna’s heel of democracy, India has nothing to worry about: no one does eternal vigilance better than Hindus. They’re the only Indo-Europeans who still worship the old gods, unlike their feckless Persian and European cousins. They’re even building a new temple to mark Rama’s birthplace—a controversial construction project that has been a major political issue for the last thirty years. It’s hard to imagine Greeks getting worked up over a temple to Odysseus, never mind the other supposed heirs of Greek civilisation caring one whit. India’s politics are bruising and its elections are hard-fought, but that’s just what a democracy needs to stay in top shape. Krishna would be proud.