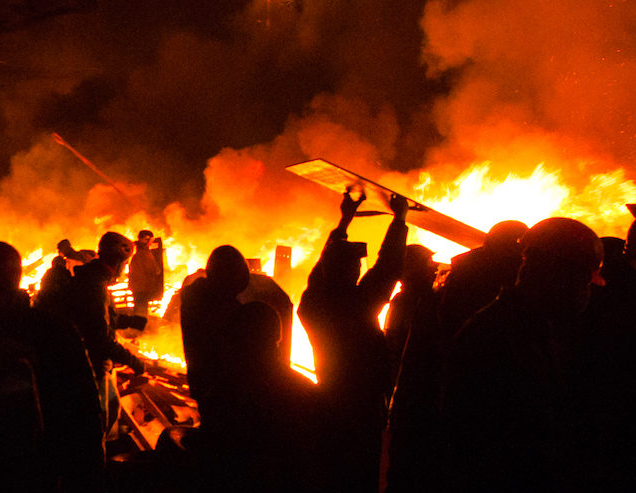 Everyone loves a good riot, or at least some wanton destruction. Monotheism got its start when Abraham trashed his father’s idol shop. The fabled democracy of ancient Athens was little more than a century of mob rule. Mark Antony got started in politics by inciting a mob to burn down the houses of Brutus and Cassius. When Jesus overthrows the tables of the money changers, we cheer; when the chief priest questions his authority, we hiss. We are all Spartacus.

Who now stands up for Terah? Sparta? Brutus and Cassius? The money changers in the Temple? Even the Ramsay Centre for Western Civilisation features revolution on its website, with Delacroix’s Liberty Leading the People to topple a constitutional monarchy. The BBC’s Doctor Who has helped a hundred alien races oust their governments; how often has he (or, more recently, she) checked back to see how the former rebels were using their newfound powers? If the history of decolonisation has taught us anything, it’s that romantic revolutionaries rarely make responsible rulers.

The fashionable fascination with rioters and rioting is not confined to socialists, liberals or conservatives, to Left or Right. It seems to have much more to do with distance. The more remote the rioting, the more attractive it seems. Australians leapt to the defence of Hong Kong’s anti-China (pro-democracy?) protesters when they burned metro stations last year, confronting police with bricks, petrol bombs and even an occasional bow and arrow. This year, your ABC is glorifying the burning of police stations across the United States. Hong Kong is a poke in the eye for China, after all, and Minneapolis is a long way from Ultimo.

Global news coverage of the riots, looting and arson that spread across America portrayed the “protests” as a righteous response to racially-tinged police brutality. Murder is murder, and the video footage of police officer Derek Chauvin kneeling on the neck of George Floyd is chilling indeed. Concerned bystanders repeatedly asked, then yelled at the police to stop. Floyd already had his hands cuffed behind his back, and there were at least four armed officers on the scene, so it’s unlikely that he could have posed any threat. Chauvin awaits the verdict of a jury of his peers.

Meanwhile America faces the jury of the press corps, which has fallen in love with the mayor of Minneapolis, Jacob Frey, an attractive young millennial who in looks, speech and politics resembles nothing so much as an American Justin Trudeau. He is a Democrat—the top five candidates in the city’s Australian-style transferable preference voting system were all Democrats—who campaigned on a platform of (wait for it) police reform. Frey wanted to hire an additional 400 officers in a bid to reshape the force. The coronavirus put paid to that.

In America’s mirror-image political colour scheme, Minneapolis is the bluest of blue cities in a consistently blue state. It is represented in Congress by the Somali-American former refugee Ilhan Omar. After going heavily for Bernie Sanders in the 2016 Democratic Party primaries, Minnesota (the state of which Minneapolis is the capital) voted overwhelmingly for Hillary Clinton in the ensuing presidential election. If the Derek Chauvin riots (it seems unfair to associate them with the apparently peaceable George Floyd) are a product of the divided America we hear so much about, it’s an America divided between African-Americans and the Democrats who govern them.

Nearly all the cities that have been hit hard by riots and looting are long-time bastions of the Democratic Party. Yet when the party’s presumptive presidential nominee, Joe “you ain’t black” Biden, said in a teary-eyed video plea that George Floyd was a victim of America’s “original sin” of “systemic racism”, the media lapped it up. Biden’s written follow-up statement condemning looting and rioting was less well reported. Not that he called it “looting” or “rioting”. He wrote that “protest” was “an utterly American response” to injustice, but that “burning down communities” and “violence that endangers lives” were not. One out of three ain’t bad.

The United States actually has long and glorious traditions of burning down communities and violence that endangers lives. In a country whose citizens refused to ratify their constitution until a promise was inserted that “the right of the people to keep and bear arms shall not be infringed”, a certain degree of elemental savagery is to be expected. Biden and the Democrats who govern most of America’s big cities are caught in the contradiction of having to applaud violent “protesters” while calling for restraint. Donald Trump’s coolly matter-of-fact “looting leads to shooting” is more historically honest (if less politically correct).

For the fact is that riots and looting have been a way of life in America since before there was even a United States. Every American schoolchild knows about the 1770 riot remembered as the Boston Massacre. They learn especially that the first American to die in that confrontation was a mixed-race African-American and Native American former slave named Crispus Attucks. Their curriculum then moves on to the 1773 incident that has gone down in history as the Boston Tea Party. The East India Company called it looting and vandalism.

After the Revolution, the first major riots in the fledgling republic broke out in 1786, when Daniel Shays led a group of western Massachusetts frontier farmers to disrupt court proceedings for the collection of debts. George Washington, then in brief retirement before returning to lead the country as its first president in 1791, suggested that the rebels might be agents of “British influence disseminated by Tories”. Thus began the era of fake news. Captain Shays, a wounded war veteran who had been presented his officer’s sword by no less than the Marquis de Lafayette, was later pardoned for his crimes—but not for his debts.

Shortly after assuming the presidency, Washington had to deal with another frontier tax revolt led by a Revolutionary War veteran, the Whiskey Rebellion. Like Shays and his Massachusetts farmers five years earlier, western Pennsylvania’s Major James McFarlane and his distiller friends harassed tax collectors and disrupted court proceedings, this time over the collection of a new federal tax on alcohol. Unlike Shays, McFarlane lost his life in the revolt. The Massachusetts authorities were something of a soft touch. Washington meant business.

So does Trump. In response to the riots and looting, he put military police on standby, even as Minnesota’s (Democratic) governor Tim Walz mobilised 10,000 troops from the state’s National Guard. The National Guard is a unique American institution, a survival of the old state militias from previous centuries. Nominally under state control, it is now trained, equipped and paid for by the federal government. It even has an air wing, though Minnesota’s F-16s and C-130s are unlikely to be deployed on the streets of Minneapolis.

More than a dozen other state governors have called out their own (ground) National Guards to buttress beleaguered city police forces as the “protests” have spread. “Protesters” looted a shopping mall in Los Angeles, a department store in Seattle, and retail outlets in Philadelphia. They set cars on fire throughout the country. They even attacked an Apple store in Brooklyn. Apple’s tempered glass cracked, but did not break.

In Atlanta, “protesters” attacked the headquarters of CNN, the erstwhile Cable News Network now reduced to initials—and almost to rubble. The (black, female, Democratic) mayor of Atlanta, Keisha Lance Bottoms, begged the “protesters” to spare the network, on which she often appeared. They ultimately diverted next door to the College Football Hall of Fame. In a choice between looting officially branded college football jerseys or CNN news anchor bobble-heads, it was no contest. Crisis averted.

Inevitably, the attack on CNN was blamed on … Donald Trump. By repeatedly demonising the network on Twitter and in the White House press room, he apparently motivated a mob of young, stone-throwing, skateboard-wielding “protesters” to spray-paint “F*** Trump” on the giant CNN logo that fronts their building. Meanwhile back in Washington, another group of “protesters” attacked a Fox News reporter because, you know, Trump has violated the sanctity of the press. Hey, if Jay-Z can have an entourage, so can Trump.

Trust Atlanta’s Mayor Bottoms to remember what really matters in all this: social distancing. Lecturing the kids that if “you were out protesting last night, you probably need to go get a Covid test this week”, she reminded them that “there is still a pandemic in America that’s killing black and brown people”. A viral pandemic, that is. Black lives matter, if not to the Minneapolis police, then at least to the Atlanta mayor. Now if only she can convince your ABC.

3 thoughts on “Rebels Without a Pause”