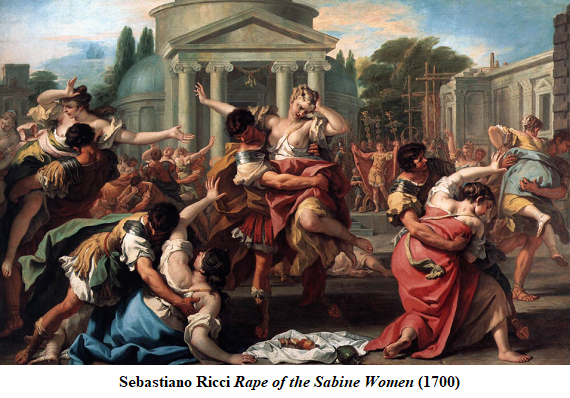 Is it possible that Eve raped Adam in the Garden of Eden? Or that Adam raped Eve? Like most records of sexual relations that occurred long ago, the Bible is unclear on this issue. It does not record which partner initiated contact, or whether either partner gave “enthusiastic consent”, but only that “Adam knew Eve his wife; and she conceived”. Most of us today know a lot of people, but in those days there weren’t many people around to know, so naturally Adam and Eve knew each other. It is true that there is no record that either of them said “no” to knowing the other, but these days we are told that “no means no” is no longer good enough, and consent requires an emphatic and continuous “yes”. By that measure, it is quite possible that Adam and Eve actually raped each other, if neither of them raised the issue of consent before getting to know each other. And it should come as no surprise: they were certainly both guilty of obscene exposure—though they were not ashamed until later, and thus did not press charges.

By the ever-tightening standards of today’s anti-rape activists, nearly all sexual activity that has occurred throughout all of history now constitutes “rape”. Indeed there is a certain strand of feminism that regards all sexual relations between men and women as rape (of the woman). But even the relatively more restrained and infinitely more influential feminists who staff women’s charities, university counselling offices and the ABC have embraced a definition of consent that would classify most past and present sex as rape, and either do the same for future sex, or discourage it altogether: the kinky humour of repeatedly asking “Do you consent?” (with the partner answering, “Enthusiastically!”) is bound to wear off pretty quickly. That said, even a brief familiarity with human beings (especially young ones) suggests that the future of the species is probably not at risk from a lack of enthusiastic consent.

And if it is, there’s always IVF.

In A Tale of Two Cities, Dickens decried the folly of believing in “the precept that ‘whatever is, is right’; an aphorism that would be as final as it is lazy, did it not include the troublesome consequence, that nothing that ever was, was wrong”. Yet the fallacy of presentism is always with us, and never more so than with reformers. Manners change, and with them moral standards—and, it must be admitted, generally for the better. Reasonable people do not want to return to the bad old days when laws against rape did not apply within the marital relationship, or even to the moderately not-so-good old days when many people considered it acceptable to have sex with partners who had passed out from drinking too much. In our perverse political landscape where only conservatives believe in progress while progressives believe that the world is only getting worse, the conservatives have evidence on their side. But progress itself is often as illogical as the progressives who disown it.

Rape, or sexual assault (as it is known in modernised lawbooks), is a very serious crime. Feminists and progressives, however, may not fully understand how it came to be treated by society as such a serious crime. Today, non-consensual sexual intercourse is treated as a crime roughly on a par with physical assault causing grievous bodily harm. In the not-so-distant past, it has been treated as a crime on a par with murder. And historically, it was a crime that could only be perpetrated by men. Even today, some jurisdictions (including the United Kingdom) only admit the possibility that a man can commit rape, while others (including Queensland and Victoria) define rape in strongly gendered terms. This is all very old-fashioned. The progressive feminist notion that unwanted or regretted sex amounts to rape is a co-optation of an ancient crime for new moral purposes. It is very much a case of new wine in very old bottles.

The English word rape is derived directly from a Latin root meaning “to carry away”, as in the rape of the Sabines. Thus a raptor is a bird that carries away its prey; the rapture is the moment following the second coming of Christ when the saved will be carried away to heaven. In its original, Roman meaning, rape did not necessarily entail sexual intercourse (though it strongly implied it); rape simply meant that a man’s daughter or wife had been carried off by another man. The aggrieved party was the father or husband, not the daughter or wife, and a daughter who enthusiastically consented to being carried off by her lover was just as much “raped” as one who resisted. Thus a common historical remedy for rape was to require the rapist to marry his victim (the daughter, that is, not the father). Now retroactively redefined as a barbarous custom, in many cases this may have been exactly what the couple wanted.

Rape was one of the few Roman (and later medieval) crimes that was punishable by death, and it wasn’t out of any concern for the rights of women. Rape was a capital offence because it had the potential to create progeny without the approval of the paterfamilias; it violated the sanctity of family succession and (in pre-Christian times) family worship. Talk about patriarchy! The whole idea that rape should be a crime at all is dripping in patriarchy. But over time this archaic offence against a patriarchal family religion evolved into a medieval offence against a Christian model of marriage, then into a Victorian offence against a respectable woman’s chastity, and finally into a modern offence against an independent woman’s autonomy. Nonetheless, throughout this long evolution, rape retained its sui generis status as a taboo crime set apart from all others.

No one now questions that sexual assault is and should be a crime. But in New South Wales, where rape laws have been thoroughly modernised and separated from squalid biological descriptions, the Crimes Act flatly states that “any person who has sexual intercourse with another person without the consent of the other person and who knows that the other person does not consent to the sexual intercourse is liable to imprisonment for 14 years”. To be clear, this does not require coercion; aggravating circumstances like coercion can raise the penalty to twenty years. Knowingly having sex with someone who doesn’t want to is surely bad behaviour, and may under certain circumstances even rise to the level of criminality. But if debates over the definition of consent have become heated and shrill, it is because “consent” can mean the difference between a bad night out and fourteen years in prison.

In an era of readily available birth control and widespread abortion on demand, we might question whether an extraordinarily harsh penalty inherited for a religious crime against patriarchy should be retained for a moral crime against propriety. No one doubts that non-consensual sexual intercourse should be illegal. But just how illegal should it be, when coercion is not involved? And how much consent is enough—to avoid fourteen years in prison? Consent is a perennially slippery concept. When two drunk people have sexual intercourse to which neither had the capacity to consent, should they both be sent to prison for a decade or more? The patriarchy says yes, since regardless of circumstances or motivation, sexual relations have the potential to alter family relationships. But in a liberal society founded on the autonomy of the individual, uncoerced but non-consensual sex seems a much less consequential crime than, say, gashing someone’s eye with a broken beer bottle.

Sex is an emotional act (or at least it should be), and it is quite natural that sexual crimes should arouse especially intense emotional responses. But it is particularly where emotions are aroused that cool rationality is most required. Today’s high-stakes sex crimes accusations are high-stakes precisely because of the irrational connection made between ancient patriarchal taboos and modern feminist sensibilities. The enduring image of rape as a unique crime of personal violation, still reflected in the anatomical specificity of some state rape laws, is a holdover from another time: ironically, not from the earliest times, but from the Victorian era that forms the reference point for so much modern feminism. In the very earliest times, personal violation was par for the course. We only have women at all because God put Adam to sleep and harvested one of his ribs to make Eve. At least He used anaesthesia. Bone of his bones and flesh of his flesh, Eve cleaved unto Adam (or vice versa) just two verses later. That sure didn’t take long.

Maybe we won’t need IVF to perpetuate the species, after all.

Given Back as a Gift That Which Was Taken