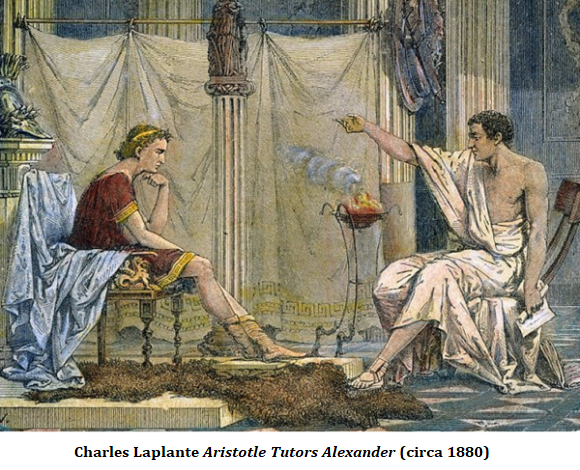 Ah, the liberal arts. The artes liberales. The trivium and quadrivium. The education of free citizens; the accumulated learning of antiquity preserved in the medieval university and passed on to the modern age. Grammar, logic, rhetoric, astronomy, arithmetic, geometry and music: the disciplines that turn a man into a gentleman. The liberal arts, the very foundation of our shared humanity, the eternal truths that unite us all regardless of culture or creed. With them, life itself is sweetness and light; without them, hopelessly philistine.

Well, that’s the theory at any rate. In reality, the liberal arts date from a time when “free citizen” meant “heavy infantry”. Back in ancient Athens, Socrates served with distinction as a hoplite in battles at Delium, Potidaea and Amphipolis. His student Xenophon was the cavalryman who led the “ten thousand” home from Persia. An even more accomplished student of the liberal arts was Alexander of Macedon, who conquered the world as far as India. His private tutor was none other than Aristotle.

Aristotle was in fact a local boy made good. Born in the northern Greek (or southern Macedonian, depending on your point of view) town of Stageira, he went off to Athens to study at Plato’s Academy. He stayed on to teach there for most of two decades. Good thing, too: while he was away in Athens, one Philip of Macedon sacked Stageira and sold its entire population into slavery. Had Aristotle been there, he could have been enslaved along with the rest of them, and ended up teaching Alexander for free.

Instead, he was able to drive a hard bargain. In exchange for giving up life in the metropolis to go tutor a dictator’s arrogant teenage son, he bargained to have his hometown rebuilt and all its former inhabitants restored from slavery. It was the original Thousand Talents program, and Aristotle was its prime recruit. The liberal arts weren’t yet a “thing”, but all seven subjects would have been on Aristotle’s syllabus for Alexander. He might even have added politics and science, given enough time, but Alexander’s studies were cut short by military service.

Aristotle only got to babysit Alexander for three years before the young and future king set off to fulfil his delusions of grandeur. In 340 BC, Alexander was sent by his father to subdue a Thracian revolt, in the process founding his first eponymous city at the tender age of sixteen. He called it Alexandropolis, an early experiment before settling on Alexandria for the next twenty. More a doer than a thinker, Alexander may have lacked a literary flare for place names. After all, constant campaigning left him little time to contemplate the liberal arts. It did, however, give him many opportunities to practise them.

The liberal arts, you see, were not originally about leisure. They were about action. Military action, to be specific. Grammar for giving clear commands; logic for debating strategy; rhetoric for rousing the soldiers; astronomy for finding your way at night; arithmetic for counting your troops; geometry for making formations; and most crucial of all, music for marching, drilling, signalling and the overall exercise of command. In various forms, the liberal arts remained the foundation of a future general’s education from the Persian Wars right up until the Battle of Waterloo.

Thus when Alexander marched off with his father to conquer Greece, he merely exchanged the tutorial room for an industry placement in the family business. The Greek campaign in 338 BC gave him a year-long internship during which to practise the liberal arts. They were the practical vocational skills of an active military leader. Want to inspire your infantry to stand their ground? Logic and rhetoric will convince them that it is safer to face the enemy’s spears than to obey the impulse to turn and run. Planning a daylight ambush with your auxiliary archers? Geometry and astronomy will have their arrows raining down as if from the sun itself.

The Greeks revolted on hearing of the assassination of Philip, giving the young Alexander more opportunities to practise the liberal arts. Shortly after he defeated Athens in 336 BC, his tutor Aristotle returned there to set up his Lyceum. History does not record how Aristotle outmanoeuvred his old rivals at the Academy to get permission to locate his school on the very spot where Socrates had once held court, but his Macedonian connections couldn’t have hurt. The Lyceum and its library stood for more than two centuries outside Athens’s Temple of Apollo before eventually being carted off to (no surprise) Rome. It was through the influence of Rome that Aristotle himself became the foundation of the liberal arts curriculum.

Alexander went on to conquer the East; the liberal arts went on to conquer the world. Medieval universities offered four degrees: arts, medicine, theology and law. The latter three formed the professions, suitable enough for younger sons. But the arts were the preserve of the aristocracy—the fighting aristocracy. You didn’t keep the Arabs out, the nobles in, and the peasants down by arguing over theology and law. And medicine was hardly useful for healing, never mind fighting.

The narrowly technical discipline of the true liberal arts education survived into the early modern era to mould the minds of those great archetypes of the Renaissance man, Leonardo and Michelangelo. Both spent as much time designing fortifications as painting chapels. Their contemporary Columbus didn’t run into America in a fit of absence of mind, nor did da Gama make it to the real India on a wind and a prayer. They studied their way to discovery, and if Columbus studied wrong, blame Ptolemy’s Geography, not any lack of book-learning.

As day-to-day rulership became less martial and more bureaucratic, the trivium became the preserve of the politician, while the quadrivium remained the training of the quartermaster, the artillery, and that most mathematically inclined of military men, the captain of the ship of the line. Though increasingly segmented and specialised, the liberal arts remained practical and applied well into the nineteenth century. They didn’t really disappear until the rise of the humanities. The ivory tower pedantry of the Doctor of Philosophy was the living death of the liberal arts.

When the liberal arts lived in a tower, it was bristling with cannon. Maybe we should be glad that they’re gone. But with them went something of the spirit of command—not just over our fellow human beings, but over our surroundings, and over our own destinies. Today’s graduates still have the will to power, but they seem to lack willpower, and the ability to form intellectually disciplined evaluations of the challenges that come before them. No one wants today’s graduates to emulate Alexander by sacking Tyre, crucifying the defenders, and selling the remainder of the population into slavery. But it would be nice if they could text grammatically and calculate percentages.

It would be even better if they could apply the basic tools of the liberal arts to make intelligent, independent judgments about the important issues of the day and then act on them decisively, without fear of embarrassment. If the substance of the classic liberal arts was the technology of command, their spirit was always self-reliance. In a world dominated by obedience, the liberal arts granted autonomy. They gave the ancient gentleman all the tools he needed to determine his own destiny.

Aristotle asserted in the Nicomachean Ethics that “piety requires us to honour truth above our friends”. That’s a tough precept to sell to the teenage mind, and not one that the postmodern university is very interested in selling. When universities ask students to think critically, they really mean to think like critics: to judge as their teachers would judge. The classic liberal arts encouraged (or at least enabled) something very different: independent thinking. Judge for yourself—and then act on your judgments.

It would be vain traditionalism to attempt to return to the seven liberal arts of the Greeks, Romans and Renaissance Italy. A little more logic might be nice, but no one has to study the standard trumpet calls for advance, rotate and retreat in order to become an autonomous actor in today’s world. A contemporary liberal arts curriculum would focus instead on the skills needed for twenty-first-century self-reliance: engineering in place of astronomy, tweeting in place of public speaking.

Alexander’s unparalleled arrogance would have made him a Twitter star. He might also have made a great civil engineer. But remembering Alexander’s example, maybe it’s safer not to educate our soldiers in the liberal arts. In a world of nuclear weapons and killer drones, “truth above friends” is perhaps a motto best reserved for civilians.

Western Civilisation — Western Sydney, That Is