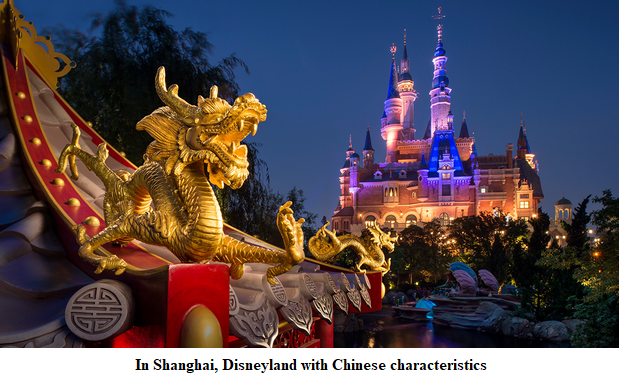 With its internet protected by a Great Firewall, international travel on hiatus, and foreign film releases limited to the Marvel Cinematic Universe’s Infinity Saga (yes, that’s what Disney calls it), today’s China has turned inward to an extent unprecedented in the country’s history. Forget about the Ming Dynasty Haijin (sea ban); media control has recently become so tight that even Disney can’t get its movies shown in China. With the three-phase, twenty-three-film Infinity Saga now complete, Disney is eager to unleash the next batch of Marvel comic book characters onto the Chinese market. But the opening film of the multicultural fourth phase of the Marvel Cinematic Universe has been nixed by the censors. Intended to introduce Chinese audiences to a new stable of sequel-ready superheroes, Eternals seems to have been banned in China.

“Seems”, because China does not explicitly ban disfavoured movies; it just doesn’t show them. Plans for Disney’s latest superhero supermovie were undone by the unearthing of an incautious utterance of its once-unknown director, Chloé Zhao. In 2013, the then-aspiring film-maker made the amateur mistake of appearing ungrateful to the country that gave her life and the Party that still controls her future box-office earnings potential. In an unguarded interview with Filmmaker magazine, Zhao called her native China “a place where there are lies everywhere”. As if that weren’t damning enough, she doubled down with the frank reflection that “a lot of info I received when I was younger was not true”.

Imagine the panic at Cinderella’s castle when they found out. Disney must have discovered the long-forgotten remarks before the rest of us, because the Zhao interview was mysteriously edited by Filmmaker this February to exclude them. Shortly after that quiet rewriting of history, Zhao won a Golden Globe for Nomadland. China’s state media were ecstatic over her success. In that distant past (February 28 this year), the Golden Globes weren’t yet racist, Black Lives Matter activist Tom Cruise had not yet returned his awards in protest, and Zhao was not yet a pariah in her native land. But sometime in March, the Chinese internet discovered Zhao’s conveniently erased (but inconveniently archived) quotes. China’s pride in its favourite daughter rapidly turned to prejudice—just weeks before the Academy Awards.

Disney owns the rights to broadcast the Oscars through its ABC television subsidiary, and it can’t have been happy when China proscribed the show due to the prospect that Nomadland might win an award. That put Disney in a real bind. In addition to airing the program and employing the pariah, Disney was also the proud distributor of the problematic film, putting it in triple jeopardy. On the night, Nomadland garnered three Oscars, including Best Director for Zhao. Served lemons, Disney added a spoonful of politically correct sugar to make a barrier-breaking lemonade: it promoted Zhao as the first “woman of colour” to win the Best Director award. If there’s a straw, grasp it.

And hope it doesn’t break the mouse’s back. Well before Zhao’s Oscar win cemented her celebrity status, Disney had already given her $200 million to spawn a new, more inclusive cinematic universe for its Marvel Studios division with Eternals. That’s quite a boost from Nomadland, which was made for just $5 million. The extra $195 million bought a boatload of special effects and big-name stars. Zhao’s screenplay added some extra woke cred to boot: in addition to its award-winning woman-of-colour director, Eternals will feature the MCU’s first on-screen “LGBTQ superhero kiss”. For the record, it’s a G. That may have doomed the film in China even more than its director. Disney routinely sanitises MCU productions to please the Chinese censors, but editing out a gay kiss would have got the whole studio cancelled back home. Maybe Zhao did Disney a favour by getting her movie banned for political speech before it could be denounced for political appeasement.

To complement the diversity-themed Eternals, Disney planned to launch an Asia-focused superhero franchise later this year with another MCU comic book revival, Shang-Chi and the Legend of the Ten Rings. Directed by the half-Japanese-American (maternal side) Destin Daniel Cretton, Shang-Chi stars the Chinese-Canadian stunt actor Simu Liu in the title role. Liu’s (heterosexual) love interest is played by the Chinese-Korean-American rapper Awkwafina (don’t blame me; it’s her name), who is best known for her hit single “My Vag” (say it with a soft “g”). The movie also features Hong Kong’s Tony Leung, Malaysia’s Michelle Yeoh and the Chinese-American Fala Chen. Only an American studio could produce such a pan-Asian film.

But having dodged the homophobia bullet with Eternals, Disney has seen Shang-Chi slammed in the Chinese media by accusations of … yes, wait for it … racism. The arch-villain of Shang-Chi is the titular character’s father, a stock MCU evildoer called The Mandarin. It doesn’t get any more Chinese than that. But as with Zhao’s youthful indiscretions, there was a backstory here that was just waiting to be dug up by an overzealous Chinese netizen. It turns out that The Mandarin is in fact a China-friendly replacement for Shang-Chi’s original comic book father, an infamous ancient alchemist trading under the newly objectionable name of Fu Manchu.

Many (OK, most) Quadrant readers will be old enough to remember the original Fu Manchu novels and films, and nearly all will remember that Peter Sellers recreated the role for his final flick, The Fiendish Plot of Dr Fu Manchu. Fiendish it may have been, but cringeworthy all the same. Sellers literally died of embarrassment. The funny thing is that Marvel’s comic books actually dropped Fu forty years ago, precisely because of the Sellers movie: not out of concern that Sellers was reviving racist “yellowface” stereotypes, but simply to avoid brand confusion. As a result, Marvel’s Fu Manchu has been out of print since 1983, and the company reportedly let its licence on the character lapse.

That hasn’t prevented Shang-Chi from “hurting the feelings of the Chinese people”, to use the Chinese Communist Party term of art. Apparently the mere association of the movie with a historical comic book series that incorporated a Chinese character who had previously been portrayed in British and American films by actors of European descent is sufficient to see it banned in China. Not for nothing have CCP officials been sending their children to study at Western universities these last thirty years. The theory of guilt by association (however remote) has now travelled from Mao Zedong’s Great Proletarian Cultural Revolution through America’s Ivy League Cancel Culture Revolution to return as the foundation of Xi Jinping’s Cancel Culture with Chinese Characteristics.

Of course, China’s associations of Shang-Chi with Fu Manchu, and Fu Manchu with “yellowface” racism, are just as disingenuous as the trigger warnings and “speech is violence” claims to be found on any Western university campus. No matter. China wants to punish Disney for employing Zhao, and one excuse for cancelling Shang-Chi is as good as another. The racism charge may be ridiculous, but it has the advantage of being an excuse that the Western media can understand, and may even support. After all, who’s going to stand up for yellowface? Even Justin Trudeau has to draw the line somewhere.

Cancelling two movies (and jeopardising the launch of what could be a twenty-title series of China-focused productions) may seem an outsized punishment for two sentences spoken by a Disney director a decade before she went to work for Disney, but that’s China. And Disney knows the drill. It cancelled one of its own streaming television stars, the martial artist turned Mandalorian actress Gina Carano, for a social media post comparing cancel culture to the early stages of the Holocaust. That, on top of ridiculing the practice of posting preferred pronouns and declining to endorse Black Lives Matter. Worst of all, she publicly supported Donald Trump.

Carano has talent and charisma, and will eventually find work. She may even run for Congress. Disney already owns Congress, and will eventually break back into the China market. But unlike Carano, Disney will have to kowtow. It’s hard to imagine that Disney would go so far as to make Mulan 2 in Xinjiang using real Uyghur slave labour to fill the ranks of Muslim invaders being slain en masse by Han Chinese armies, but you never know. Alternatively, it could release a celebratory short this July to honour the 100th anniversary of the founding of the Chinese Communist Party. Or it might simply broadcast the July 1 centenary celebrations worldwide on ABC and Disney+. And why not? They couldn’t do worse than the Oscars, and Best Dictator is bound to go to a person of colour. Win-win co-operation doesn’t get any better than that.

Innocence’s Fearful Faith in the Unknowable

Hail to The Donald