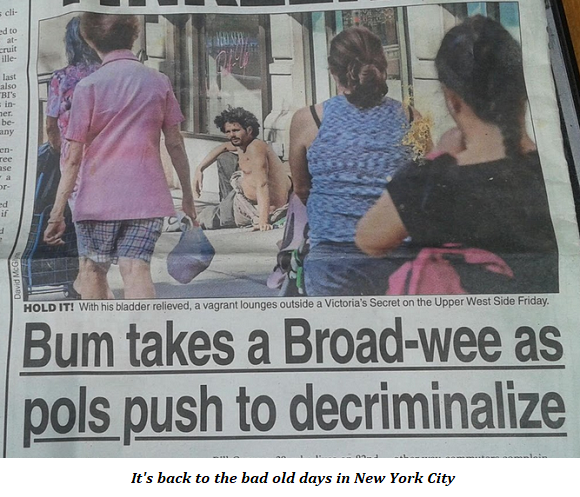 Australians are in for some surprises if we’re ever again allowed to travel. Certain places we’ve previously become almost as familiar with as our own cities will have changed massively during and after the coronavirus pandemic.

Then again, certain places don’t need a dose of Wuhan flu in order to undergo rapid and profound change. Even the largest cities, despite being weighed down by the inertia of enormous populations, can quickly alter their character.

New York City is a prime example. I first visited the great metropolis in 1990. Ominously, the very first New Yorker I met in New York—a friendly-seeming fellow at Grand Central Station—immediately tried to steal my luggage.

But a few fake porters running the old let-me-help-you-with-your-luggage scam was the least of New York’s problems. That year was the worst-ever for murders in New York. More than 2600 people were killed in various shootings, stabbings and beatings. A zodiac killer was on the loose, selecting his victims according to star signs.

Understandably, residents felt besieged. Approached with the intent of asking for street directions, New Yorkers frequently ran away. My budget digs at the decrepit Hotel Carter, on 43rd Street, were not exactly a safe refuge. The hotel’s security guard had a lucrative sideline selling stolen credit cards.

Late in 1990, a single edition of the New York Post ran these column pointers off the front page: “We Are Captives in Our Own Homes”, “It’s Time to Take Off the White Gloves” and “New York’s Streets Are Awash in Blood”. They ran below the main headline, which pleaded with useless New York Democrat mayor David Dinkins: “Dave, Do Something!”

Finally, Dinkins did. He lost the mayoral election in 1993 to Rudy Giuliani.

But how to turn New York around? The city had become so violent over such a long period that it seemed to be New York’s permanent condition. In 1970, for example, there were 1444 New York murders. That number grew to 2228 in 1980 and by 1990 it stood at 2605. Little wonder, then, that city officials essentially gave up on ending this mayhem and decided instead to merely manage it.

It was the New York equivalent of Labor’s approach to illegal immigration. Can’t fix it, so stop trying. But just as Tony Abbott’s election and implementation of tough anti-illegal measures stopped the boats, Giuliani’s election, along with a belated hike in police numbers by Dinkins, began to set matters right.

Now the Daily Telegraph’s senior political editor, Morrow discovered something new about New York under Giuliani’s leadership. It wasn’t a monstrous cargo ship, incapable of quick directional shifts. It was more like a speedboat. The city, it turns out, is remarkably responsive to policy alterations.

Giuliani’s strategy for reducing the murder rate was to tackle other crimes with as much vigour. “Obviously murder and graffiti are two vastly different crimes,” he explained in 1998. “But they are part of the same continuum, and a climate that tolerates one is more likely to tolerate the other.”

The Republican mayor’s approach worked. Between 1990 and 1999, murders dropped by 73 per cent, burglaries by 66 per cent, assaults by 40 per cent and robberies by 67 per cent. In 1998, the total of murders in New York declined to three digits for the first time since 1967.

That pattern has held. In 2019 there were 278 fewer homicides in New York than in 1965, despite the population increasing by nearly four million during that time. For some years since the late 1990s, New York was frequently rated one of the safest large cities in the US.

Just as it was difficult during the city’s worst years to imagine a peaceful New York, now it became a challenge to imagine a violent, lawless New York. The flipside of New York’s ability to quickly reinvent itself as a happy haven, however, is that it can also go the other way.

As Morrow points out: “If police announce that they won’t charge offenders for minor crimes, by the next day the subways will reek of urine.” It seems counter-intuitive, given New York’s gigantic population, but the place has a feedback loop so tight that policy changes have an obvious effect almost instantly.

A few years ago I spent a sunny afternoon wandering around New York with my two young nieces. Even if travel was permitted, we won’t be doing that again any time soon. A friend’s son, a lifelong New Yorker, recently fled to Connecticut. The final straw was when his wife-to-be got smacked in the face by a stranger as she walked home from the subway.

Under incompetent Democrat rule, random violence is back in fashion across New York. Murders in March this year were up 36 per cent compared to the previous March. Shootings have increased by nearly 77 per cent. Rapes are up by more than 30 per cent. By mid-April, some 92 murders had been recorded—an overall increase of 54 per cent over 2020, which itself recorded a 45 per cent increase over the previous year.

While the city this year isn’t going to match figures from previous appalling eras, the trends are all pointing in that direction.

All of which means that, once travel beyond Australia is approved, there will be at least one previously coveted destination where you really won’t want to go. And then there’s the not-so-small matter of New York’s dismal coronavirus tactics, which so far have killed nearly 33,000 people. Take just three bad years out of the murder total from 1970 all the way to 1990 and the numbers are almost identical.

On the plus side, hotel rooms are cheap. In October 2019, during a traditionally busy month for tourism, average daily rates in New York ran to US$336. Last October the average was down to US$135—about what you’d pay in Albury.

Right now, and for some considerable time into the future, Albury seems the better option.

SOUND is an essential component of major sport. That’s why so many codes played recorded crowd noises at events where spectators were Covid-banned.

The NRL even added fake crowds. Fans were invited, for a $22 fee, to submit images of themselves to the NRL that were then enlarged and placed in the stands.

Unfortunately, quality control was lacking. One prankster submitted an image of British serial killer Harold Shipman. Sixteen years after his death, the likely murderer of hundreds was an impassive witness to a match between the Penrith Panthers and Newcastle Knights.

Judging by his team colours, you see, the late homicidal maniac is a Canberra Raiders supporter.

The Australian Open not only played recorded crowd sounds but added “ooohs” and “aaahs” of varying intensity to better reflect on-court events. Whoever was operating the sound effects desk at Rod Laver Arena possessed the mercurial keyboard talents of Polish virtuoso Josef Hofmann.

Formula One motor racing actually went in the opposite direction, replacing some years ago the compelling shriek of earlier engines with the muffled, soulless moan of little semi-electric V6s.

It’s the saddest thing you’ll ever hear, outside of kitten extermination day at the local animal shelter.

F1 bosses say the change of engines was due to the sport’s need to remain “relevant” in a gradually-electrifying motoring market. More likely the notoriously cash-hungry F1 circus simply wanted to continue hauling in billion-dollar investments from the likes of Mercedes, Honda and Renault.

Still, if consumer-relevant sport is what people want, let’s give it to them.

To closely simulate pre-Covid conditions for commuters on Sydney’s rail network, rugby league fields should be substantially narrowed. Also, teams need to be expanded. About 400 players per side should do it.

If a player is forced outside the boundaries, he will be deemed to have “gotten off” at a “station” and be immediately fined for not carrying a valid ticket.

Tennis players demand total silence before every point, which is not the typical circumstance for many spectators. To modernise the game, players will be required to carry mobile phones and take urgent calls at even the most inopportune moments.

Failure to do so will result in the loss of a point. If a phone should run out of charge during a match, the player forfeits.

AFL fans often complain about the amount of time it takes to resolve disputed goals via video replays. So they’re really not going to enjoy this latest real-life intrusion into their sport.

Instead of goals being referred to match officials, every disputed score will require a visit from an NBN technician. And then, because the technician will get it wrong, a subsequent visit will also be needed. Possibly four or five.

That’s real life for you. Sounds like a lot of fun, doesn’t it?

What Am I Bid For Tony Jones?