Judge, Jury, Trial? Phooey to All That 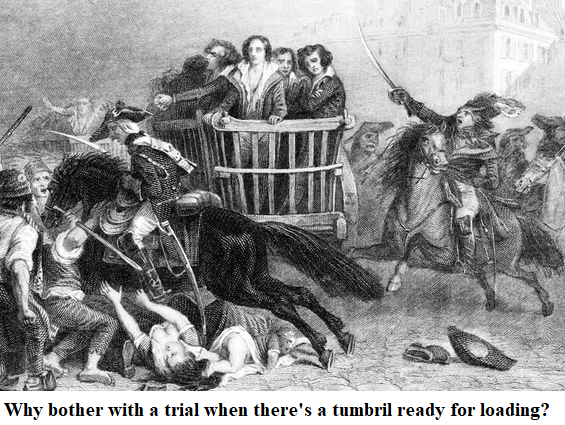 A friend once forgot to wear glasses during his drive to work. For some people, this might not have been a major problem—but this friend very much required optical assistance. Also, his morning commute involved a peak-hour crossing of the Sydney Harbour Bridge.

He made it to the office by combining proximity estimates of the blurry vehicle-shaped objects around him with judicious responses to frequent car horn blasts. Although he claimed to have completed the journey easily, Ken notably took a taxi home that evening.

At least his optically deprived drive-by-sound effort wasn’t filmed. Then-England cricket captain Bob Willis’s most forgetful moment, in the First Test at Edgbaston in 1982, was broadcast around the world. Even now, four decades later, a two-year-old YouTube video of the incident has scored nearly 90,000 views.

Walking out of the dressing room to resume his innings after a break, Willis made it about halfway to the pitch before he realised he’d forgotten a piece of equipment that is somewhat important in the game of cricket.

He’d left his bat behind, and the England captain had to go all the way back inside to retrieve it. Still, England won the game—just as Labor’s Anthony Albanese won this year’s federal election after forgetting Australia’s unemployment rate in his first election campaign press conference.

Perhaps forgetfulness is a path to victory. Hundreds of Greeks living on the island of Zakynthos won big a decade or so ago after apparently forgetting they weren’t blind. According to a 2012 news item, some 600 or so Greeks on the island were at various points registered as blind or otherwise vision-impaired. That was nearly ten times the rate of blindness throughout the rest of Europe.

“In reality there is nothing wrong with their sight at all,” the Christian Science Monitor reported. “‘Blind’ taxi drivers cheerfully ferry tourists around the holiday destination, recreational hunters with purported sight problems regularly take to the hills in pursuit of wild birds and rabbits, and ‘visually impaired’ shopkeepers, taverna owners, and farmers with vineyards and olive groves go about their daily business.”

By “forgetting” they could see, those fake blind people qualified for substantial benefits. And they kept earning decent livings at the same time. “I’ve seen them playing cards in the bars and driving their cars. It’s ridiculous!” a local businessman, Spiros Skiadopoulos, told the Monitor.

By one account, the whole scam unravelled when it finally became too embarrassingly obvious to be ignored. “An islander went to the welfare office to pick up his blindness cheques,” Nikolaos Venardos, one of only forty genuinely blind people on Zakynthos, revealed to the newspaper.

“A female staff member who was on a break saw him then take off his dark glasses, jump into a Porsche and drive away. She called the police and said ‘That guy is supposed to be blind!’ That’s how it all started.”

So the chap didn’t forget he wasn’t blind. He just forgot to keep up the act. The same thing happened to a bloke who contacted me back in the 1990s with what he said was a tragic story of anti-blind discrimination. He wanted me to write a story condemning shops that placed promotional signs on footpaths, saying he kept walking into them and hurting himself.

Something about the fellow didn’t ring true. He seemed oddly able to negotiate his way around our cluttered newspaper office, for example, with minimal assistance. So I didn’t pursue the story and forgot about it myself until a few weeks later, when the same bloke turned up on one of the current affairs shows.

He’d told them the same sad saga about colliding with street signs, but the current affairs crew obviously felt similar doubts about his level of sightlessness. So they stuck a $50 note on a footpath and secretly rolled their cameras as the blind man, complete with a white cane, approached. Miraculously, his vision instantly returned. It was the quickest cure in ophthalmological history.

In the same manner as our Mediterranean mates, he forgot to stick to the script. That’s how it goes with faulty memories. It’s usually a personal situation. Occasionally, however, an entire nation of people might all forget something at exactly the same time.

During the past few years, much of Australia somehow forgot about the presumption of innocence until guilt is proven in a court of law. The University of South Australia’s Emeritus Professor of Law, Rick Sarre, here offers a brief reminder of how these matters are supposed to work:

“The principle of contempt law … is that a jury must decide the guilt or innocence of an accused on the basis of the evidence before them, and not to allow other considerations to taint their deliberations.

“This could include commenting publicly on the credibility of a victim’s story, stoking the public’s disdain of an accused by a storm of social media, or calling for a social evil to be tackled. This is referred to as sub judice (‘under a judge’) contempt.”

Or, in simpler terms: once someone has been charged, shut the hell up about it until a verdict is reached.

In the case of Bruce Lehrmann, the young man who was accused of raping fellow former Liberal staffer Brittany Higgins inside Parliament House in 2019, many of us—including former prime minister Scott Morrison—entirely forgot to do this. The same applies to prominent media clowns and any number of Twitter social justice warriors.

Morrison’s comments were among the worst. “I am sorry. We are sorry. I am sorry to Ms Higgins for the terrible things that took place here,” he told Parliament in February this year.

“The place that should have been a place for safety and contribution, turned out to be a nightmare. I’m sorry for all those who came before Ms Higgins and endured the same. But she had the courage to stand, and so here we are.”

Where you were, ex-PM, was putting a fair trial at risk. One of the lawyers representing Lehrmann, who has always maintained his innocence, was understandably astonished. “In light of the complexity, difficulty and importance of the task before any jury already,” Warwick Korn told the media, “the behaviour of our Prime Minister and others in this past 24 hours truly beggars belief.”

Alerted to the fact he’d imperilled legal processes, Morrison subsequently claimed through a spokesman that he’d referred to “the many terrible experiences Ms Higgins has detailed during her time working at Parliament House” and that his comments were “by no means a reflection on the matters before a court”.

Sure, pal. The next day, Canberra’s Press Club provided a platform for Higgins to flatly declare: “I was raped on a couch in what I thought was the safest and most secure building in Australia.” And then, in June, Network Ten presenter Lisa Wilkinson gave a Logies acceptance speech that ended up causing Lehrmann’s trial to be delayed.

Wilkinson’s healthy self-regard was clear from the outset. “After 40 years in journalism, this interview and this story is by far the most important work I have ever done,” she said. “And I knew it from the very first phone call I had early last year with a young woman whose name she told me was Brittany Higgins.”

“This honour belongs to Brittany,” Wilkinson continued, holding aloft her little TV Week trophy as though it was a Nobel Prize. “It belongs to a twenty-six-year-old’s unwavering courage. It belongs to a woman who said ‘enough’.”

Wilkinson wore some deserved criticism following that ego-soaked performance, leading to an absurdly hypocritical plea from Wilkinson’s network. “This reporting is now causing significant harm,” Ten claimed. “We ask these organisations to cease this harassment to allow Lisa the best opportunity to give her evidence in court and to enable the trial to go ahead in a fair and timely manner.”

The “significant harm” caused by Wilkinson saw the trial pushed back by more than three months. “The distinction between an allegation and the fact of guilt,” ACT Supreme Court Chief Justice Lucy McCallum ruled, “has been lost.”

Our national bout of legal amnesia barely let up even after that delayed trial was abandoned due to concerns over Higgins’s mental health. “I wish Brittany Higgins well,” Prime Minister Albanese said. “She is a woman of considerable courage. She is a woman who has been very brave and I wish her all the best.” Albanese prefaced his praise with this line: “I’ll be careful about comments given the circumstances which are there.”

Better late than never, but clearly too late for all parties involved to ever achieve anything remotely resembling justice. For a fuller understanding of the underlying political, cultural and media elements of this case, I recommend Tom Wolfe’s Bonfire of the Vanities. Wolfe foresaw all of this from a remove of more than thirty years.

By the way, readers will notice I’ve only filed one column this month rather than the usual two. My excuse is bulletproof. I forgot.

9 thoughts on “Judge, Jury, Trial? Phooey to All That”