Four actors, young men, sit woodenly round a table in a café. The mobile phone of one of them, “Jonno”, rings. “It’s Deb,” he mutters, taking the call. Deb must be a bit of a pain in the neck because smiling Jonno rapidly gets terse. “I gave you enough money this week to get the … hey, I’ve told you, you don’t speak when I’m speaking.” If Deb has been told this and has elected still to be with Jonno, she’s obviously a doormat as well. Perhaps she’s ethnic and has old-fashioned views on obeying her man.

Jonno suddenly loses it. “Seriously, do you, like, practise being this stupid?” he asks. This question prompts one his table companions to stir from his torpor. “Come on, Jonno,” he butts in, “do you think that’s funny? Because that’s not funny, mate,” he adds, though you wonder how on earth a humourless-looking dork like him would know what was funny and what was not. He looks like someone who wouldn’t find the combined efforts of P.G. Wodehouse, the Marx Brothers and Frankie Howerd funny. Jonno, instead of telling him to belt up and mind his own business, giggles lamely, “Just a joke, mate.” “It’s not a joke, man,” sternly retorts another of the lunchers, a nerdy looking character with an oh-so-yesterday man-bun. Up come the titles: “Respect women. Call it out.” Jonno’s companions look glum. Instead of an angel they clearly have a “sexist” at their table.

What we have been watching is another great piece of Australian film-making, courtesy as usual of the taxpayer. This television ad is part of a campaign called “Respect Women”, an endeavour by Victoria’s wastrel loony Left government to—King Canute springs to mind—abolish what it calls “the scourge of family violence”. Because do you know what causes family violence? The pop psychologists and feminists behind this campaign think they do. Lack of respect for women.

But hang on a minute. Aren’t these goody-goodies in the ad being a bit “sexist” themselves? Why do they assume on the basis of a barely audible monosyllable that it’s a woman on the other end of the call? How well do they know Jonno? True, “Deb” is usually a female name, but how can they be sure that in this case it’s not a nickname for Jonno’s boyfriend or gay “husband”? Or that it’s not a diminutive of a man’s actual name, perhaps of someone with musical parents who called him Debussy? Or Debdan, or Debendra, both among the masculine names starting with Deb? Further, is it not culpably cis-heteronormative, a gross example of gender prejudice, to assume that a man talking on the phone about domestic matters is talking to a female? Isn’t that “homophobic”? Isn’t it “stereotyping”? Isn’t it the kind of thing that gives “gay rights” enthusiasts the vapours? Might it not amount to “hate speech”? Doesn’t the Victorian government’s “anti-sexism” budget run to “calling out” prejudice against gays?

And even if Deb is female she might be, from the tone of Jonno’s conversation, his brattish daughter. Or she might be (“I gave you enough money this week”) his blackmailer. Or what if Jonno himself “identifies” as a woman and is in a lesbian relationship with Deb? Didn’t whatever highly-paid dimwit wrote this ad realise his script could bear any of these interpretations? I’d be getting the agency to refund the cheque if I were running “Respect Women”. 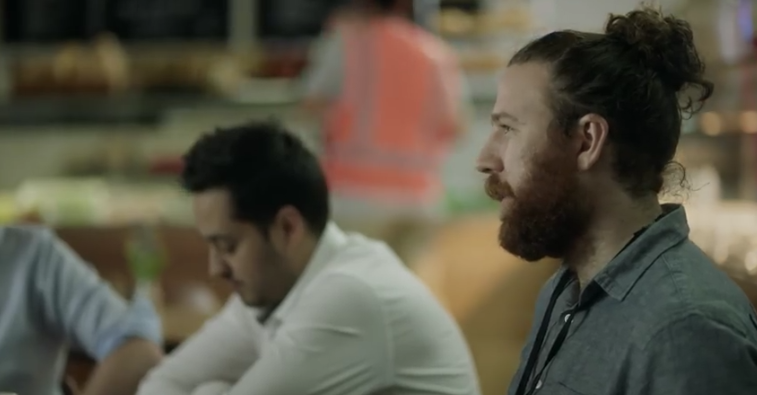 “Respect Women” indeed. All well-brought-up men used to respect women. Why did they stop (assuming for the sake of argument that they did)? Could it be because feminists threw their respect back in their faces? That their gallantry was sneered at and turned into a dirty word and redefined as a manifestation of “patriarchy” in its patronising mode? If this is so, and men stopped respecting women because their respect was rejected, and if that is the cause of domestic violence, isn’t it then the feminists and not the men who are to blame?

That might be true, except that this argument is all based on pernicious nonsense. It is a lie to say that family violence is caused by a lack of respect for women. It is nonsense to say, as the Victorian government does, that “sexism and gender inequality” are among the “main drivers of family violence”. Violence of any type is caused by the stresses and strains on individuals and their individual character. It is the product of specific circumstances, not of some generalised “disrespect”. If it weren’t, how would the “Respect Women” campaigners explain the huge numbers—up to 50 per cent of reported domestic violence cases, according to US surveys—where the man is the victim? A lack of respect for men on the part of women? Why aren’t we being exhorted to call that out too?

And what about the 30 per cent of lesbian relationships that become violent? Is a woman beating up a woman respecting her own sex? When you approach the tangled world of gender politics you are very soon in a jungle of contradictions, but it’s not the place to look for the causes of domestic unhappiness. Feminist propaganda that sneers at full-time motherhood is one of several more likely factors. So, and not unrelated, is the excessive acquisition of material goods with both spouses working to pay for it and not enough family life.

The “Respect Women” campaign is not only a distortion of truth, it is dishonest about its motives. This is not so much a campaign against violence as a campaign against men. The feminists who rule the roost in so many government departments have appropriated public money to further their own crusade against what they define as “toxic masculinity”. (If they’re looking for “gender inequality” they might start with the public service with its vast number of female employees and especially with all those NGOs preaching “diversity”, some of which—check their websites—are 80 per cent female.) These bureaucratic women have already managed to establish for the purposes of public policy that “domestic violence” invariably means violence against women. Women, they assert, are no match for a violent male. This too is a lie propagated with funds extracted from the taxpayer. As the Los Angeles Times put it on February 22 this year in a report on “intimate partner violence”:

Female-on-male violence is often assumed to be harmless, given sex differences in size and strength. Yet women may use weapons—including knives, glass, boiling water and various household objects—while men may be held back from defending themselves by cultural taboos against harming women.

Naturally such statements are fiercely contested by the feminist establishment in universities and the media, who would prefer to forget about facts, forget about nagging or shrewishness (forget above all about those old cartoons of brawny wives and rolling pins) because men are always the offenders and must be seen to be, on the basis of no other “proof” than that it suits feminists, many of whom are lesbians, to blot out statistics and believe it.

These women don’t like men. They want them feminised. They want weirdos like Safe Schools with their lunatic theories of “gender fluidity” and their attempts to get little boys to behave like little girls to drain the masculinity out of males and so eliminate the “inequality” of superior physical strength. It never occurs to them that to normal men respect for women—gallantry, protectiveness if you like—comes naturally as a consequence of their stronger physique. The two men in the commercial who turn on poor Jonno are the kind of sanitised men feminists want all men to be, if they have to put up with the existence of men at all.

It is absurd to believe that men and women who are inclined to violence will suddenly desist because of a crappy ad on television. Nor is telling any women impressionable enough to believe it that whatever happens at home is the man’s fault necessarily the best way of ensuring harmonious relations between the sexes. Respect women, yes, and respect men too. To civilised people this is second nature.

People happy in their home life don’t beat each other up. Nor do most men need to be told to respect women. You have only to look around you to see that even after years of feminist abuse and contempt, gallantry is still on offer, for those normal, un-angry women who are prepared to accept it.