The sea exerts a deeply primitive attraction, particularly as we approach old age and lean towards eternity. You could almost say it owns us. A view of the ocean is a key requirement when selecting a location for retirement villages. As death sneaks up, we seek the reassurance of an ocean view. The 1953 Hollywood movie From Here to Eternity captured that sense. As individuals we die while the ocean, Herman Melville suggested, endures forever. The annihilation of humanity is complete, the Pequod vanishes, only the ocean remains imperturbably unaffected, outside the tragedy: “a sullen white surf beat against its steep sides; then all collapsed, and the great white shroud of the sea rolled on as it rolled five thousand years ago”.

We are a nation of coast-dwellers looking anxiously outwards at the world. In the past, and more especially today, the connection of national identity with the inland has become less and less a real living source of national sentiment. Most Australians spend their entire lives close to the country’s edge. Unlike many other countries—the US, UK, France, Germany, even China—we face towards the sea, a fact of geography celebrated in the words of our national anthem: a nation “girt by sea”. The coast, not the inland, is where we live, making us a veranda culture of edge-livers or “seadowners”, who, like the “sundowners” of old, drop their swag at sundown beside the sea.

In publishing, the beach house is a popular and profitable genre. Most of us, at some time, have toyed with the fantasy of swapping a stressful city existence for a sensual carefree existence close to the surf. Increasingly, when money has to be buried, perhaps in vacant high-rise city apartments—moneyboxes in the air—the alluring alternative is an extravagant ocean retreat.

Many beach homes are no different from what you might encounter in suburbia. But building a residence near the ocean poses unique challenges: the airborne salt in sea spray, the pounding of storm surf, extreme wind pressure, and serious damage to sand dunes are just a few of such concerns. The sea is moody, and while it may entertain us for a time, the novelty wears off. A big sea wind can wreak havoc, salt spray rusts most metals, brass has to be polished constantly. Any structure close to salt water requires constant maintenance. Houses, like boats, are equally vulnerable and high maintenance. Sensible people avoid building close to the sea and leave it to romantics running away from reality.

What sort of beach house is it people imagine and seek? Is it the rustic shack Robert Drewe described in The Bodysurfers at Pearl Beach, run-down, one that embodies the essence of a careless life? A perfect solitary writer’s retreat of the sort built by people scavenging to survive during the Great Depression of the 1930s and described by Ingeborg van Teeseling? Hardly. The wealthy suffer from an embarrassment of money—where best to hide it. Compared to a luxury cruiser or yacht, beach houses go on appreciating, whereas the timber-and-hessian beach shack has struggled to survive. Luxury beach houses are a good long-term investment with tax benefits added.

The beach house nowadays is lavish, large and uncluttered, and eminently resalable. It should be all white inside, with great expanses of glass advertising how close the sea is, close enough for you to think approaching waves will roll in and spill across the living room. The Holman House perched precariously over the cliff edge at Dover Heights does that and more.

Harry Seidler introduced a new type of beach house on stilts (below) in the 1950s with parking on the ground underneath, the living above it safe from invading sand or high tide and with wonderful views over the dunes to the sea. Few of its builders realised it was derived from Le Corbusier’s invention of the pilotis to rescue Frenchmen from stinking sewer-racked basements. But Corbusier beach houses are no longer in fashion, they belong to the 1950s. 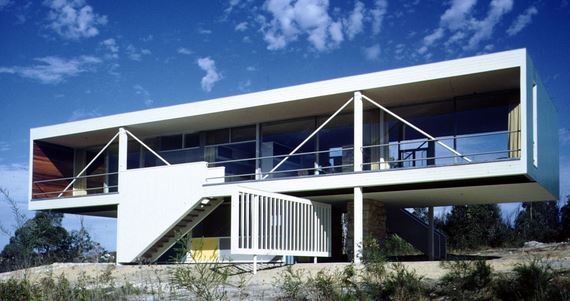 Many are impostors, suburban transplants that do not truly belong to their beguiling seaside sites. Fewer still evoke the sea or possess a poetic dimension. Remove them from the coast, and they would slide back into a high-end suburb equally comfortably. Unlike the seashell they are silent. A celebrated classic, the Magney beach house at Binge Binge Point (below) just south of Moruya, illustrates what it means to take the ocean and beach it in a frozen poem. Glenn Murcutt specialised in long corrugated-iron sheds, based on a unique roof profile. The roof of the Magney house swells like a breaking wave, kicking up at the back which faces the hill behind it, then surging forward in an electric curve of breaking water. There is a lightness to the ocean, perhaps from the light, for water is as hard as concrete. To any surfer, the interior looks like the underside of a wave rolling overhead. The Magney house is a visual ocean onomatopoeia. Colquhoun failed to mention it in Sandcastles, preferring instead heavy-bodied examples loaded with social pretension. 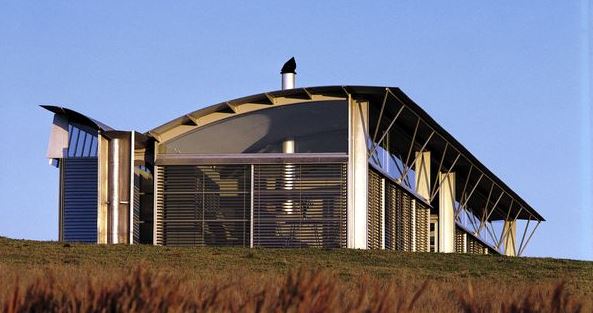 No one ever said it was easy. Solving the physical challenges building so close to the sea is one thing; giving artistic form, expressing it, an even greater one. John Wardle reached out to a familiar Australian trope, the shearers’ quarters from the outback, for his solution on Bruny Island in Tasmania. Most people would recognise the style, or non-architect style of corrugated iron and rude bush carpentry. It is all there in the 1950s movie The Shiralee based on the D’Arcy Niland novel. And what a magnificent job Wardle has done (below). The roof lifts off the walls and sails into the sky with the surging power of a Boeing 787 Dreamliner taking off. Nothing about it is rustic or remotely shearer. This is not a simple shed, instead “it is rather like a large scale joinery project”. Anything further from the humble shearers’ quarters could hardly be imagined. 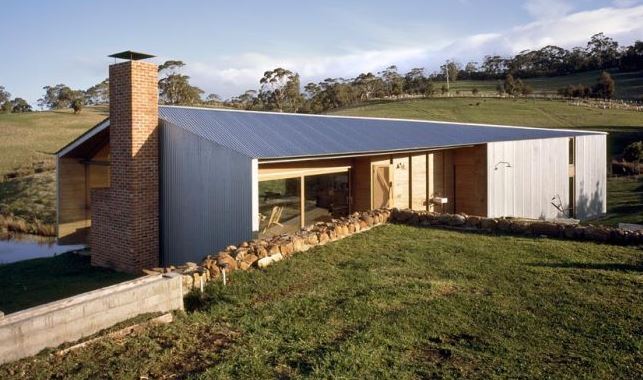 James Stockwell’s feeling for the beach is entirely different. His houses really do resemble actual sandcastles on a windy beach. One of his houses mounds up and slides back into the sand; it forms a protective arc around a court area in front, cupping it protectively from the wind, and allowing the wind to roll over it with little turbulence. The smooth aerodynamic shape of the house sinks into the Gippsland landscape with a minimum of disturbance.

The St Andrew Beach house on the Mornington Peninsula (below) is its opposite. Opposed conflicting planes war with one another. Abrupt angular shapes and planes claw the wind and shed vortices. Turbulence causes noise when it is windy, especially at night when people are trying to sleep. Steve Hatzelis’s sculptural forms could be expected given his exposure to the work of Zaha Hadid in her London office.

There is no single correct response. Our coast abounds in natural sculpture; little wonder the annual Bondi to Bronte “Sculpture by the Sea” is so popular. Wind and sea relentlessly chisel and reshape the sandstone cliffs. Colquhoun’s selection is as varied and diverse as their locations. They echo and complete a cliff face at Palm Beach, rise up in a concrete lookout below the Great Ocean Road, cantilever into space at Separation Creek. There are any number of possible architectural stances to choose.

What, if anything, do such houses reveal about contemporary life in Australia and our uncertain quest to know ourselves? What can we say about such a rag-tag bunch? Do the houses offer answers? I think not. Most would be equally at ease on the California coast, Mexico, on Mallorca and Ibiza, or even on the Shetland Islands. So international has Australian architecture become today, so lacking a local accent. The only genuine message they send is that Australians are people who live on the edge of the land. Does this make us shallow, narcissists living from moment to moment?

Max Dupain’s famous 1937 Sunbaker tells a similar story. Dupain shot an entire roll of film but only one frame stood out. He took his photos from many different angles. It was only when he lowered his camera to the sand that something remarkable resulted—an image we still admire today as truly symbolic. You could say it was an accident. The sunbaker dreams. That may explain the intrinsic appeal of the image—life in a moment. In surrendering to the sun and sea, to chance accidents of time and place, we find our identity as beach people. Surrendering to lethargy, we succumb. To enjoy life is no crime; it’s a pity more people do not take life that way.

Philip Drew, a regular contributor on architecture, grew up close to the sea at Coffs Harbour.

People Like Us: How Arrogance is Dividing Islam and the West, by Waleed Aly;

The Men of Perth

Well Worth the Effort