The Dictatorship of the Psychiatrists

The name C.H. Noack meant nothing to me until I bought a copy of Reginald Spencer Ellery’s Psychiatric Aspects of Modern Warfare, published in 1945. Noack had written his name on the flyleaf, and I have long since adopted the habit of looking up on the internet the names of the previous owners of my second-hand books.

The first C.H. Noack whom I found was buried in Uranquity Military Cemetery in New South Wales. He was a private who died, or was killed, in the Second World War, but the idea of such a man possessing and reading such a book seemed unlikely (was he, perhaps, learning how to be a convincing malingerer?). Besides, he must have died very late in the war if the book was his; the record I found gave no date of his death, and statistically it was more likely that he died before 1945.

In fact, it was altogether more likely that it had belonged to Charles Hugh Noack (1917–69), a Melbourne psychiatrist, all of whose scientific papers were published under the name C.H. Noack. One of them, in the Medical Journal of Australia for 1951, was a pioneering work subsequently cited in much of the medical literature on the subject. Noack and a colleague successfully treated a hundred cases of mania with lithium carbonate, thus contributing to one of the very few advances in psychiatry since time began.

But why did I purchase Ellery’s book in the first place? I came across him in the context of the Ern Malley affair. The publisher of the spoof modernist poems, Max Harris, was tried for obscenity in South Australia and Dr Ellery, in the course of that ridiculous trial, was introduced as an expert on whether the poems would tend to corrupt and deprave. As a psychiatrist, he was supposed, at least by the defence, to have a special insight into that question, on the grounds that psychiatrists know more about the workings of the human mind than is available to any intelligent and normally reflective person. This is a modern superstition, but probably ineradicable, like the belief (in certain parts of the world) in djinns. 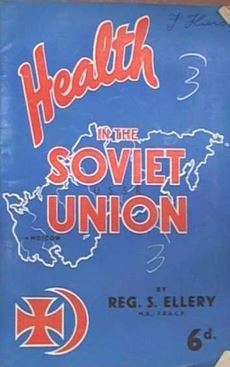 I quickly discovered that Dr Ellery (1897–1955) had been as famous as a communist as a psychiatrist. He was obviously something of a stormy petrel, accused at an early stage in his career of cruelty to his patients, for example by unnecessarily inserting feeding tubes into patients to demonstrate to nurses how it was done; but an official inquiry exonerated him, and he was found to have been the object of malicious accusations by staff who did not like him because he was critical of the old asylum regime and its routines. He seems not to have been averse to personal publicity, either; his mansion was the subject in 1951 of an article in the Australian Women’s Weekly, and when his rheumatoid arthritis, from which he had suffered since 1938, was much improved by the then-new wonder drug cortisone, there were articles in the newspapers about him. His wife, Australia’s first professional harpsichordist, survived him by more than forty years.

I became curious as to his writings. I discovered that he was by no means a bad writer, if sometimes a little too fond of his own eloquence. He was not entirely consistent (as which of us is?) and his attitude to the avocations of the real, existing proletarians, whom he claimed to want to liberate from their chains and transform into the masters of the world, was nothing if not disdainful, instinct with the bourgeois intellectual’s contempt:

The average soldier, though by no means a fool, is not equipped to think. His mind is a mosaic of prejudice, sentiment, commonplace ideas and idle humours. He is ready to fall in with the opinion of the multitude, to cheer when it cheers and boo when it boos; to let his conclusions be guided by the crafty and his wants dictated by his appetites. His interests are generally trivial, his emotions are frequently shallow, and his chief academy is the betting-ring …

It cannot be denied that the army contains a proportion of men bordering on the moron class … This fact … accounts for the mental inertia of a great number whose interests seldom go beyond women, beer and racehorses.

What price, then, one-man-one-vote representative democracy, let alone the dictatorship of the proletariat?

When it came to prejudice, Dr Ellery was not completely without it. His frequent references to the Catholic Church strike the modern reader as distinctly paranoid and, as he himself puts it in the context of Nazi Germany, “the individual paranoiac has certain well marked clinical characteristics based on his latent homosexual tendencies”—a view he seems to have swallowed uncritically from that arch-bourgeois ideologist, Sigmund Freud.

Indeed, Dr Ellery seemed to have blamed the whole of Nazism on homosexuality, latent or otherwise:

Nazism is a homosexual culture. The Nazi ideal is masculinity. The typical Nazi has the homosexual’s fear of the female … Hitler and his satellites, under the strong pressure of their own latent homosexuality, have foisted this masculinity on the German nation once again, knowing, perhaps, that militarism flourishes best in the atmosphere of repressed homosexuality.

Dr Ellery has no doubts about the proper place of psychiatry in the prevention of another such catastrophe: “The psychiatry of the closet must become the enlightenment of the council chamber. Politicians must submit to guidance. Only thus may calamity be averted.”

The dictatorship, then, not of the proletariat, but of psychiatrists. Personally, I would take my chances with the betting, drinking, semi-moron class.

By the time he came to write his magnum opus, Ellery was starting on his road away from Damascus. Having been the most orthodox of orthodox fellow travellers, to the point of denouncing Trotsky, he wrote this footnote:

It should be borne in mind that the present political system in the Soviet Union is not Communism … Only in name is it a dictatorship of the proletariat. Its centralized oligarchy is in the hands of the Communist Party led by Stalin. That this party has done much to advance the economic, social and cultural standards of the masses cannot be denied; but in doing so, it has erected a cumbrous bureaucracy and has employed dictatorial methods to consolidate the hierarchy of the State which has become a ruthless and powerful instrument of government, to all appearances at present unlikely, in the wishful-thinking of Marx, to “wither away” for the coming of Communism.

This, of course, doesn’t quite capture the horrors wrought by the Russian Revolution, but it is a distinct advance on Eyes Left!, Ellery’s best-selling pamphlet of only two years earlier, when no praise was lavish enough for the miracles wrought under Stalin’s wise guidance (“a man whose modesty is as disarming as his determination is inflexible—a man of great vision, a sincere student, a warm friend”):

The Soviet Union must be the pattern for our reconstructional efforts … We should remember that it succeeded in spite of overwhelming obstacles because the socialist ideology appealed to men and women with courage and enthusiasm, willing to risk personal pleasure and private satisfaction for the splendid purpose in the task that lay ahead of them. We, likewise, can succeed if … we can enlist the pliant sympathies of youth to a doctrine which aims at the abolition of the exploitation of man by man.

Among the exploitative forces was religion: “Christianity has an ugly history … Its voice has been raised against gambling and drinking, but not against the root causes of social injustice.” Two years later, Ellery had softened his opinion somewhat:

Spiritually, we have no nostrum. By ceasing to believe in God we have forfeited the formula of salvation, and lost the clue to life’s meaning. Life appears pointless, and human beings just a set of aimless helots jumping on and off earth’s merry-go-round, to no rational purpose … We … suffer the bankruptcy of belief … We are spiritually frustrated, and frustration leads to aggression.

Dr Ellery was of a type by no means uncommon, the intellectual who changes his mind but whose certainty is like the grin of the Cheshire cat, being what remains when everything else has disappeared. I, of course, am not at all like that; at least, I don’t think that I am. No, no, I am quite certain that I am not.