The Blue Skies of Sporting Memory 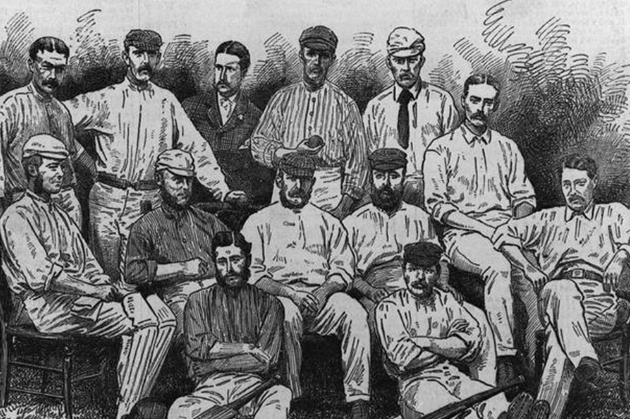 It was an Australian—Kerry Packer, to be precise—who destroyed my interest in professional cricket once and for all. He turned the game (in my estimation) into yet another vulgar spectacle in a world hardly short of vulgar spectacles. No doubt this was in some sense inevitable and of great financial advantage to the players, who until then had been paid very badly; but my view of professional cricket until then had been as of a vocation rather than a career. I felt about post-Packer cricket as I feel about a deconsecrated church now being used as a nightclub, and also as I feel about rugby union since its professionalisation.

The latter seems to have had a strange biological effect, rather like the addition of the hormone thyroxine to the water in which cave-dwelling salamanders live permanently in larval form: they change into something else entirely. In the case of rugby players, they grew two feet taller and three feet wider; there were no such terrifyingly muscle-bound monsters, refugees from horror films, in my childhood and youth.

Even professional football has changed. When I was a boy, professional footballers went home on the bus after the game rather than in a Ferrari, and to a landlady more likely than to a mansion; and no one knew anything about their private lives, however famous as footballers they were, and however often their picture appeared on cigarette cards. They were paid a maximum wage not very much more than that of a skilled worker in a factory, and in those days the pitch turned almost immediately into a sea of mud if it rained. It cost very little to gain entrance to a match, the facilities were spartan, as if designed to expose infants to the elements to see which were fit to survive, and the behaviour of the crowd on the whole was good. It was much more a working-class spectator sport than it is now, when no politician, celebrity or chief executive of a vast company dares admit to an indifference to it or not to “support” a team (whatever that may mean), mainly composed of foreign mercenaries with no essential connection or loyalty to the locality in which the team has its stadium. “Supporting” a team is at best a form of local pride for fools. I remember hearing, when I was boy of about ten who went to matches with a friend of the same age, a man in the crowd saying to the people around him, “No swearing, there are children present.” The quality of the football has improved out of all recognition, it is far faster and more skilful nowadays, but (somewhat against what one might have hoped or expected) with prosperity has come coarseness.

I wasted many a happy day at Lord’s. In those days, there were no clouds, only clear blue skies; like the game itself, the weather has since changed for the worse. The crowd, except for Test matches, was exiguous, but it struck me as in no way peculiar that professionals should play a three-day match in front of only a smattering of spectators in a very large ground, only to end in a draw. On the contrary, this only reassured me as to the importance of what they were doing: there was something almost hieratic about it. Lord’s was then the monastery of cricket, and I have always been attracted to monasteries.

I can still conjure up in my mind’s YouTube cricketing heroes of those days. I checked recently that my memory of Brian Statham’s characteristic bowling action was accurate, and it was. I remember at a Test match sitting by the white boundary rope (the seats were all taken), running to stop the ball struck by the England captain, P.B.H. May, shortly before it hit the rope, an act which did not meet with the approval of purists: but touching the ball struck by May and throwing it back to the chasing fielder, I felt something of the irrational thrill that I was later to experience on buying books inscribed by their author. Perhaps some sympathetic magic would increase my ability or talent by mere touch.

In those days, I had an elevated romantic view of cricketers. On a frieze on the wall of Lord’s was inscribed the famous line of Sir Henry Newbolt’s poem “Vitaï Lampada”, “Play up! play up! and play the game!”

And it’s not for the sake of a ribboned coat,
Or the selfish hope of a season’s fame,
But his captain’s hand on his shoulder smote
“Play up! play up! and play the game!”

I imagined a world in which people would rather lose than cheat and in which one applauded the feats of one opponents, even of the visiting Australians (Mackay, Simpson and Benaud, for example) who were the opponents par excellence. As for underdogs, one delighted in their victory.

Was this all romantic claptrap? I have only two cricketing books in my library, one of them a study of the suicide of cricketers (apparently they have a high rate of felo de se) by the prolific cricket writer David Frith. I am aware that I begin to sound like the old retired cricketers described by Frith whose:

reunion gatherings have their limitations: a couple of drinks, a few hours of reminiscence, grumbling about the modern game, followed by mutterings on how old and washed-out some former team-mates look … and an intimate admission that one perhaps doesn’t look so bright and youthful oneself any more.

Have things deteriorated, or have I merely grown older and endowed the past with a sunset glow? Long after my own rather undistinguished career as a player was over, one of my neighbours asked me to be scorer for a nearby village team in a local league. I accepted somewhat hesitantly, but was pleased to discover that there was honey still for tea, or at least cucumber sandwiches and cakes, and the village pitch was undefiled, that cricket wives still accompanied their husbands, that little boys played tip-and-run outside the boundary, and that scoring books were exactly as I remembered them from more than half a century ago, notwithstanding the development of electronic scoring systems.

My neighbour gave me to study the professionally-printed rule book of the league in which the village team played. It was very long, with (to me) astonishingly complex regulations as to how points in the league were to be allocated in the event of matches being stopped by rain and other natural calamities. But even more astonishing were the rules to detect, avoid and punish cheating.

Not having followed cricket for many years, I did not know what “sledging” was, namely the humiliation and intimidation of batsmen by the fielders. This was prohibited, as was insulting the umpires. I had no idea that such things were done on cricket fields, and I asked my neighbour whether such was the practice in village games. “Oh yes,” he replied, “they imitate the professionals.” Gentlemanliness no longer existed, and if you could get away with a false claim to have caught someone, that is what you did. No more namby-pamby gentlemanly play up, play up, and play the game; more all is fair in love and war.

My only other cricketing book is titled Cricket in Conflict: The Story of Major Crises that Have Rocked the Game, by Peter Wynne-Thomas and Peter Arnold, published in 1984. I bought it because it was very cheap. It was, as its title suggested, a history of crises (including the bodyline controversy) since the game was played in anything like a recognisable form.

Though by no means academic, it was typical of the kind of historiography according to which the history of anything is nothing but a record of the crime and folly committed in its name. Was there never a time, then, when the expression “It’s not cricket!” was not a true reflection of the way the game was played? If it were not, how did the expression ever arise?

I remember the days of the Gentlemen versus Players matches at Lord’s. They might as well have taken place in 600 BC, so far have things changed. The Gentlemen were amateurs, at least nominally, and the Players were professionals, who were of lower social standing but not necessarily of higher cricketing prowess; but they were all, as far as my blinkered eyes could see, gentlemen. And then, along came Kerry Packer …

Or am I making a scapegoat of him?

Anthony Daniels’s most recent book, co-authored with Kenneth Francis, is The Terror of Existence: From Ecclesiastes to Theatre of the Absurd (New English Review Press), published under his pen-name, Theodore Dalrymple.

One thought on “The Blue Skies of Sporting Memory”