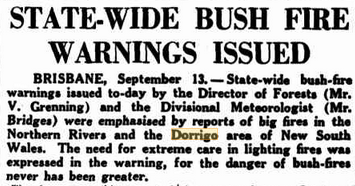 At left, contributor John Mikkelsen reports on the bushfires that have made for tense days and nights near Noosa and south to Dorrigo in NSW — fires the usual suspects were quick to identify as symptoms of catastrophic climate change. “There’s no record of fire dangers that high that early in those areas in NSW,” Rob Rogers, the RFS’s deputy commissioner, informs SMH readers. “The fires were burning like it was mid-summer.”

Deputy Commissioner Rogers should have a word with the archivists at Trove, the online service of the National Library, who might be able to expand his grasp of history. They could, for example, refer him to this report from the Clarence and Richmond Examiner of September 26, 1912.

Back then, in those innocent days before climate hysteria, Australians understood that a landscape carpeted with drought-dried grasses and pyrophilic eucalypts was apt to go up in flames at short notice. These days, well what’s the point of fire if it can’t be leveraged by climateers to acquire fleets of water bombers, bigger budgets, research grants and a few minutes of doom-laden fame on the ABC.