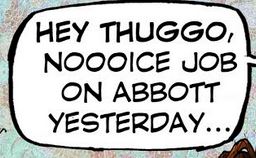 As good men and women of the left all know, plus indeterminate genders in between, Tony Abbott is the spawn of Satan. Therefore, when he cops a Liverpool kiss from a man plastered with a ‘Say Yes’ sticker, it is his own fault. Take it from remainder-bin columnist Paula Matthewson:

The second point is that even though Tony Abbott didn’t deserve to be assaulted – because no-one ever deserves violence – he is at least partially responsible for what happened.

That’s because Mr Abbott helped to create the hyper-partisan and aggressive political environment that we have today; an environment that encouraged his assailant to think it was okay to physically hurt the former prime minister of Australia.

This, mind you, from the same Ms Matthewson whose political accuity is so pronounced that, upon noticing several months ago that Abbott and his former chief of staff, Peta Credlin, happened to be out of the country at the same time, she immediately concluded they must be rendezvousing in some discreet location to plot the imminent demise of Prime Minister Malcolm Turnbull.

As it happened, Abbott was in Croatia and Credlin in Israel. Some columnists might ask to be left alone in the library with their professional reputations and a revolver after such a howler, but not the irrepressible Ms Matthewson, who extrudes luvvie-wuvvie nonsense as her stock in trade.

It would be interesting to put Zeg and Ms Matthewson in the same room and hear them discuss his latest cartoon, available via the link below.