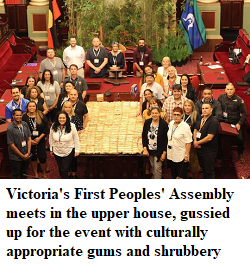 Not so long ago, Victoria’s Liberals expelled from their party a member of the upper house Legislative Council, Bernie Finn, who greatly offended his now-former colleagues by speaking against legal abortion. Given that a considerable slice of the population — albeit a minority, according to pollsters —  still shares the quaint notion that killing babies in utero is wrong and doing so right up until the moment of birth even more reprehensible, this seemed a case of political self-harm in that it signaled a further narrowing of the party’s once-broad church.

On this issue state opposition leader Matthew Guy has made common cause with Labor — and it’s not the only matter on which his alternative government is now on the same page with Premier Daniel Andrews.

Today in Melbourne, in a further coalescing of Liberal and Labor into what amounts to a Uniparty, Team Guy announced it is supporting Andrews’ initiative to draft and sign a treaty with the state’s Aborigines.

There is an election set for the first week of November, and what a dreadful choice it is that awaits voters: Labor, which excels only at corruption, and the Liberals, who stand for nothing and fall for everything.

One thought on “A not-so-alternative
Victorian government”

Men at it again

Shaky in the Garden State