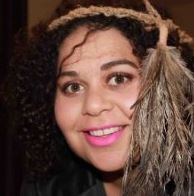 UPDATE: In the earlier post below there is reference to a speaker at the Left’s Invasion Day get-together who proclaimed, as it was reported on the wireless, that Australia “needs to be burned to the ground.” The speaker turns out to be a certain Tarneen Onus-Williams (above) and her actual quote is slightly different, according to AAP

“Fuck Australia, I hope it burns to the ground”.

Ms Onus-Williams’ yen for a conflagration of colonialist oppressors might pose some problems close to home. There’s her job at Oxfam, for starters. How would the donations roll in if all those racist letterboxes were turned to ash? Perhaps, were donations to dry up in the meantime, the charity might come to grasp what Australia and, indeed, its very own future, would look like were its employee’s dream ever to come true. Current donors might also wish to  ponder that question.

And there is her executive membership of the state-funded Koorie Youth Council, plus her gig as a client services officer at the Aboriginal Legal Service. She also finds time to be a member of the Aboriginal Interim Treaty Working Group, again state-funded. Readers curious to know how an incendiary activist spends her days and builds a career will find her LinkedIn CV quite interesting.

Undoubtedly some also will wonder at the sums involved in payrolling these activist organisations. Victoria’s Minister for Aboriginal Affairs Natalie Hutchins laid it out in May, 2017 (emphasis added)

Whatever else you might think of Ms Onus-Williams, it is impossible not to admire her commitment to the cause, even to the point of her favoured organisations’ detriment.

Burn down wicked Australia and who will send out those cheques?

Readers curious what such expenditure buys should follow this link or the one below. Generously funded since May, 2017, there isn’t much enlightenment for the dollar.

Saint Adam of the Slant

In a class of their own