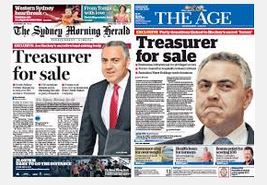 Joe Hockey’s libel action against Fairfax Media is before the courts, which places the matter beyond comment until a verdict is delivered. Some of the evidence, however, screams for what, in days gone by, would have prompted a reaming from any half-competent chief sub-editor.

“Jeez, son,” you can imagine a crusty old-timer saying to Sydney Morning Herald Editor Darren Goodsir, “you’re a hopeless unit to give me a headline like this. Now go back over to the 8pt-desk and mark up the trots results because that’s all you’re bloody fit for.”

Prompting  such a tongue-lashing would have been the headline Goodsir informed state political correspondent Sean Nicholls he “long dreamed” of putting atop the story that eventually ran under the 72-point front-page assertion “Treasurer For Sale” — the three little words now occupying so much of the court’s time.

Goodsir’s stillborn brainwave, the headline that would see the light of day only in court, was “Sloppy Joe”, which his court-tendered note to Nicholls suggests he considered the very essence of wit. Without pre-empting the court’s responsibility to determine if Hockey was defamed, a couple of observations spring immediately to mind.

The first is that the art of headline writing – and capturing complex stories in a few short, accurate and, ideally, witty words really is an art – is that a good headline prepares the reader for the facts presented in the copy below.  If the story had concerned the Treasurer’s table manners or slovenly attire – two areas in which he cannot be faulted, just by the way — then “Sloppy Joe” would have worked quite nicely. It would not have been terribly witty or original, mind you, but it would have inspired no writs.

Goodsir’s “dream” headline is deficient in more than that, however.  The other quality that defines a good headline is that, if it is not to be a straight and simple summation, as in ‘man dies in car crash’, it should be a play on words, which “Sloppy Joe” most definitely is not.  By the SMH editor’s  sad reckoning of what constitutes a sharp headline, why not “Joe Cool” or “Hockey Puck”? Neither conveys anything about the story but, like Goodsir’s insipid inspiration, they are recognisable and relatively common terms.

If Fairfax had not fired so many sub-editors, some seasoned hand might have taken the boss aside and explained how newspapers and their headlines are supposed to work. More than that, the headline that has now landed Fairfax in court might have been howled down before being sent to press.

Alas, as remaining readers recognise, Fairfax has banished all respect for the elements of decent and workmanlike journalism,  once a demanding and disciplined craft rather than, well, whatever it is that the court decides Goodsir & Co., chose to publish that night.

The latest from the hearing is available via the link below.