Family values at Their ABC 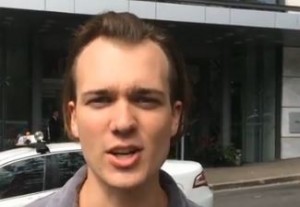 With all the pink slips handed out to journalists over the past few years, scoring a regular cheque from the national broadcaster is the dream of many an unemployed, irredeemably ink-stained wretch. The ABC pays well, certainly in comparison with Centrelink, and many newsroom hacks with sound professional skills — the nous, for example, to be wary of news “tips” alleging that the RAN is torturing illegal aliens with hot mufflers — must take in the national broadcaster’s current output and wonder just how one goes about getting a foot in the door. Many observers would agree the ABC could use a dash of just-the-facts objectivity.

True, position-vacant ads appear from time to time, although usually only once. The request for applicants pictured below, for example, sought someone to lead the newly authorised Fact Check Unit — a job that went to Russell Skelton, by happy co-incidence the only applicant who happened to be the husband of News 24 hostess Virginia Trioli. At other times, ABC recruiters place what must be a uniquely subjective emphasis on previous employment. After presiding over the Sydney Writers’ Festival, organiser Chip Rowley slipped into the job of The Drum’s editor-in-chief, also briefly advertised. Girlfriend Anne Summers must have been tickled pink to learn of her paramour’s success in a fresh field of endeavour, especially delighted that the ABC would be moving the operation from Melbourne to Sydney. No need for this happy couple to endure a long-distance love affair. 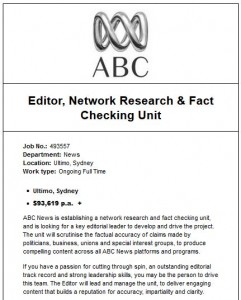 Media Watch, as noted this week by Quadrant Online, picked up a researcher who had joined the ABC after a career as a deep green publicist, some might say ‘activist’, for a left-wing group co-founded by The Greens’ Lee Rhiannon. The trade tricks he learned while studying and writing with Wendy Bacon at UTS must have impressed his interviewers no end.

Now Tim Blair reports on another young man making his way in the world, also with the help of the ABC. This time it is a hip dude called Will Colvin, whose surname might sound familiar to Radio National listeners, as he is the son of presenter Mark Colvin. As Blair notes via a link to an article by Colvin minor published on an obscure website, the youngster boasts how little work he did during a previous career phase as a journalist at news.com.au. It wasn’t that his bosses didn’t want him to write stories and edit items, quite the opposite in fact. It was a simple case of inspired and deliberate bludging, as he shamelessly describes:

“…that was the day I decided my job at news.com.au could change from ‘writing things, sub-editing things and doing website production’ to ‘doing absolutely no work at all and seeing how long I could get away with it’.”

Colvin minor didn’t much like his bosses, you see, nor Rupert Murdoch either, so it was like a revolutionary act or something, man! The item has drawn scathing comments from readers of the Mumbrella site, some wondering how, when eager journalists are losing their jobs right and left, he felt no shame in accepting a salary while being deliberately and slyly unproductive. Colvin minor makes no bones about it, however. His little memoir even comes with a photo of him making rude gestures at the camera, plus a video clip in which he shouts obscene abuse at News Corp’s HQ in Surry Hills, Sydney. Unlike ABC recruiters, the building remains unimpressed.

So, where does a lazy, deceitful, work-shy lad find an income once he is done with teaching Rupert Murdoch a thing or two? Here is a little snippet from his CV and please notice the bit Quadrant Online has underlined:

“Over the past few years he’s honed his practice, recently becoming a regular voice on the ABC’s infamous media watchdog Media Watch.”

Yes, it’s another inspired recruitment by the crew at Media Watch, a show watched by many good journos, some of whom still have jobs. That segment of the Media Watch audience might reckon Colvin minor has handed the ABC a story on a plate. No need to waste taxi vouchers chasing an elusive quarry, as he is just down the corridor doing those snarky voice-overs that, as he puts it in his CV, do so much to make compere Paul Barry’s showpiece the “infamous” production that it is.

Stay tuned, taxpayers, your ABC will certainly want to cover this little beaut of a yarn. Isn’t that right, Mr Barry?

Colvin minor‘s full memoir — “All the Ways I Wasted Rupert Murdoch’s Money” — can be read in full via the link below.

Journalism academic explains it all