The paper from another planet 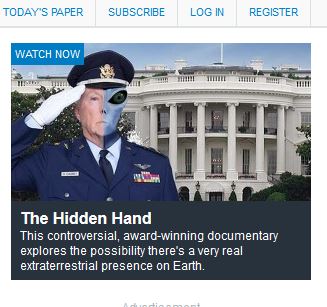 One of the great mysteries about inter-galactic aliens is why they cross the vast gulf of space and abduct random humans for no better purpose than gazing up their subjects’ bottoms, an experience almost all who claim to have been snatched by dome-headed little green men report as the highlight of those encounters. The Sydney Morning Herald cannot claim to resolve that particular mystery, but its crack investigative reporters must surely be on the case, as alien antics feature prominently on its homepage this morning (March 14).

According to the movie The Hidden Hand, which the SMH is urging its readers to download and absorb via SMH-TV, the “controversial, award-winning documentary explores the possibility there’s a very real extraterrestrial presence on Earth”. The IMDB movie-rating website’s summation sheds further light on what Fairfax editors evidently regard as fine fare for their readers, noting that the flick offers “a keen look at a spectrum of topics like alien abduction, human/alien hybridization, the military’s reverse-engineering of alien technology and the government cover-up of anything related to extraterrestrials.”

And if that is not enough of an alien update for one day, there are columns by Peter Hartcher and John Birmingham, whose monomaniacal fixations on the vile shortcomings of Tony Abbott strongly suggest they might themselves have been abducted, deeply probed and programmed to write the same story over and over and over again.

The link below leads to the SMH homepage. Click on it for a genuine other-worldly experience.

Puss and the professor