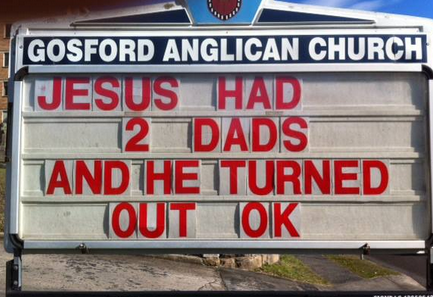 According to Prime Minister Scott Morrison, what Australia needs is a $400k-per-year ‘religious freedom commissioner’, as the right to genuflect before any god one chooses is jeopardised by those who would impose laws to address problems that have never actually arisen. Peter Kurti makes that point at left , noting that for all gay activists’ hue and cry about classroom discrimination and expulsions no instances of such alleged intolerance have yet come to light.

So, for argument’s sake, let’s grant Mr Morrison his wish and imagine how our notional commissioner might rule in this hypothetical:

Father Pat has a church hall available for social functions. He takes a booking for a party, then learns it is to be a bacchanal for chaps sporting bottomless chaps and other regalia much favoured in Taylor Square. Father Pat suspects he is being set up, much as Christian bakers and pizza-shop owners have been targeted by gay activists’ stage-managed provocations in the US.

‘Sorry, boys,” he says, “but I really can’t permit a celebration of what I regard as sinful behaviour on church property. But look, there’s a Uniting Church just down the street with a lovely hall, I’m sure they will be happy to oblige.”

Having been rejected as they hoped and planned, the party boys’ follow-up gambit is a complaint to the Australian Human Rights Commission, where their brief lands on the desk of the Sex Discrimination Commissioner. Meanwhile, Father Pat counters with an appeal to Mr Morrison’s Religious Freedom Commissioner.

Get the picture? Battling commissioners at five paces, with taxpayers picking up the tab for the inevitable legions of lawyers and bureaucrats. Meanwhile, rainbow protesters disrupt Sunday Mass with threats and demonstrations, much as was the case when the Australian Christian Lobby (ACL) had to abandon a planned seminar because the chosen venue’s management was intimidated by threats and scratched the group’s booking.

If Father Pat is lucky it will stop there: no car bombs of the sort that made such a mess of the ACL’s Canberra HQ. But there will be no joy for anyone — save, perhaps David Marr, who gets to share some prize sneers with good mate Barrie from the Insiders couch.

It was my view this proposed exception would see the Commonwealth interfere with state and territory laws by overriding those laws that prohibit discrimination in the provision of goods and services based on sexual orientation.

If adopted the changes [to the Marriage Act] would potentially permit a person to assert that their actions were based on religious views or doctrines — irrespective of how outdated or inconsistent with a modern pluralist society, international laws or community standards — those views or doctrines might be.

So, “community standards” trump “outdated” notions of morality? Well there is a can of worms to be sure.

Worth remembering also is that during her time drawing a state government salary, Ms Banks pursued the  complaint of a transsexual Greens candidate who accused the Catholic Church of discrimination. The church’s act of alleged intolerance was to publish for the benefit of the faithful a pamphlet explaining and defending the traditional view of marriage. Ms Banks’ full thoughts can be downloaded in .pdf form via this link.

Oh, and one other thing. While the Coalition can probably be trusted to appoint a reasonably sane religious commissioner, what happens when Labor gets in? The high-vis vicar of Gosford, who plasters political messages on his parish billboard, would seem a made-in-Heaven candidate. That’s one of the Rev Rod Bower‘s signposted sermons atop this post.

All this worry and concern while the solution to a non-problem is readily available and, indeed, already enshrined in law. Section 116 of the Constitution:

Commonwealth not to legislate in respect of religion

Good old Section 116. Someone should bring it to Mr Morrison’s attention.

From the belly of the beast