Of priests and pederasts 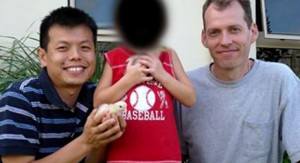 There is little chance that David Marr, practitioner of quality journalism, will go unfeted at this year’s  Walkley Awards presentation, the annual glad-rag get-together where sharp-dressed members of a down-at-heel industry honour the best journalism by their fellow union members, as those who are not in the ALP-affiliated Media Entertainment & Arts Alliance must hand over hefty fees to enter and none seems ever to collect a gong. In 2014, Marr was nominated twice — once for yet another piece in The Guardian on the bestial treatment meted to asylum seekers in Australia’s care (yawn), and yet again in the Walkley Book Award shortlist for his between-the-covers chronicle of a conservative Catholic prelate, The Prince, Faith, Abuse and George Pell. On cue, the ABC gave the book lots of free airtime and promotion.

Needless to say, Marr’s perspective on Pell is more than somewhat critical. As Gerard Henderson notes in his latest Media Watch Dog:

“In his hatchet job … Marr made reference to the fact that Fr Pell (as he then was) ‘noticed nothing’ when in 1973 he ‘moved his things’ into St Alipius Presbytery where (then) Fr Gerald Ridsdale also lived. The implication in The Prince is that Pell should have noticed that he was sharing accommodation with a child sex abuser.”

Funny, isn’t it, the things that catch the eye and don’t?

In the last days of his employment at Fairfax, Marr wrote with what some might regard as a note of sympathy for two gay dads who had seen their adopted six-year-old taken away by US child-welfare authorities, the accusation being that they were renting out the lad to fanciers of man-on-boy action. Quoted in the very first paragraph as protesting their innocence of abusing the child, the duo enjoyed further column inches in Marr’s report to explain their sorry situation (emphasis added).

“The men blame their predicament on innocent visits to three men in the US, New Zealand and Germany, who, to their complete surprise, turned out to be collectors and producers of child pornography. All three were arrested last year…

Further, by way of explaining how they had come to visit so many molesters with lad in tow, Marr quoted one of the gay dads thus:

“The two men took the boy to [a German paedophile] in October 2010 because, they say, he knew of some interesting castles. They travelled together…”

The picture atop this post is of the men with their apple-cheeked stock in trade.

Unlike Cardinal Pell, whose mere sharing of a Ballarat address with molester Gerald Ridsdale (and, just coincidentally, with former priest-turned-Labor-megaphone Paul Bongiorno) warranted a raised-eyebrow mention in Marr’s tome, the gay dads were subsequently convicted and sent away for extended stretches behind bars. Unless it has escaped Google’s attention, there is no record of Marr covering those verdicts and sentences.

And therein, perhaps, Pell’s greatest mistake. Had he actually abused small children, rather than simply sharing a roof with a pederast who was, presumably, circumspect in revealing his predations, the Cardinal might today be receiving more sympathetic treatment in the press. Alternately, if like Bongiorno he happened to be on the side of those leftist angels, he might also have seen his ignorance of a housemate’s secret crimes passed over with barely a mention.

The Walkley Awards will be doled out late this year. Expect Marr to have dinner jacket and cumberbund  neatly pressed and all ready to go.

His original report on the rent-a-boy dads can be read via the link below.

It’s ‘Trump’s America’ at the ABC