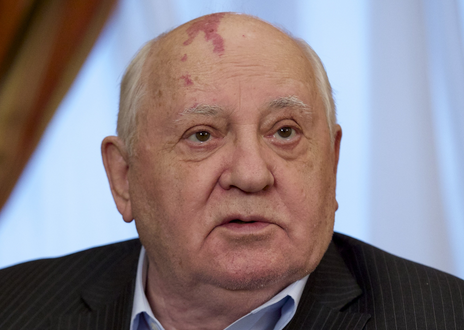 Mikhail Gorbachev — pictured above a year or two before his death on Wednesday  — is being hailed today as the key human element in bringing about the end of a great tyranny. The other key players — Ronald Reagan, Margaret Thatcher and Pope John-Paul II — will be largely overlooked in mainstream commentary because, well, they were conservatives and therefore must be depicted as subsidiary figures if not outright villains. But as Robert Service noted in his 2018 Quadrant essay on the passing of Robert Conquest, the last leader of the Soviet Union reaped a very different crop from that which he believed he was sowing:

Gorbachev got his chance in power partly because he was committed to reform, but partly also because the rest of the Politburo recognised that they had tried every other way of running their country and nothing was providing a solution. So they gave Gorbachev his head when he argued that if only the Kremlin offered a peace policy that had an impact on the alleged warmonger Ronald Reagan it would become possible to release funds sufficient to be able to undertake deep internal reform. This proved to be utopian. Indeed Gorbachev’s ideas were a primary factor in the collapse of the USSR. He would never have been allowed to impose them if the Politburo had not accepted, however reluctantly, that reform was an urgent necessity.

Gorbachev didn’t understand the chemistry of communism. He didn’t understand that without a one-party state, without a one-ideology state, without a degree of political repression, the whole system would start falling apart. If the intelligentsia could criticise past leaderships then what hope was there for Marxism-Leninism? What was the point of the founding ideology of the October Revolution? The whole system started to implode in consequence of Gorbachev’s reforms.

Service’s thoughts can be read in full here.

By the beard of the profit!