An ABC ‘scoop’ goes
down the memory hole 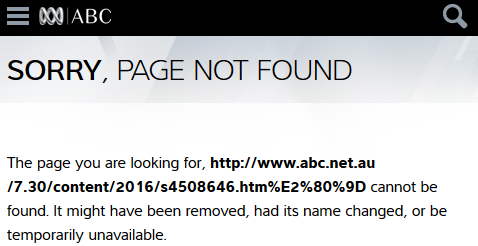 Readers who have followed the legal and policing travesties that ultimately saw a second jury convict George Pell may well recall 7.30‘s broadcast on July 27, 2016, as one of the lowest of the many low points in the drip-drip-drip of accusations and smears that preceded the cardinal’s various appearances in court, his absurd criminal conviction and current ordeal in solitary confinement. That report, by the ABC’s Louise Milligan, lent a sympathetic ear to the alleged memories of two Ballarat men, Lyndon Monument and Damian Dignan, themselves no strangers to the law, who swore the future cardinal had fondled them as children in the local swimming pool.

It was a big deal at the time — another little step toward Ms Milligan’s Walkley award and her feting as a “investigative journalist” of the first rank. It even scored her an appearance on Radio National with, of all people, Magistrate Belinda Wallington, who not long after the duo posed for picture outside the ABC’s Southbank complex (below), would occupy the bench at Pell’s committal hearing at which Ms Milligan testified. Charging bias, Pell’s lawyer, Robert Richter, called on Ms Wallington to recuse herself, but to no avail. In a further example of the ABC’s all-in-this-together approach, Radio National’s Patricia Karvelas followed up on the 7.30 report the very next day by airing an eight-minute interview with a lawyer who had represented some 30 victims of abuse. 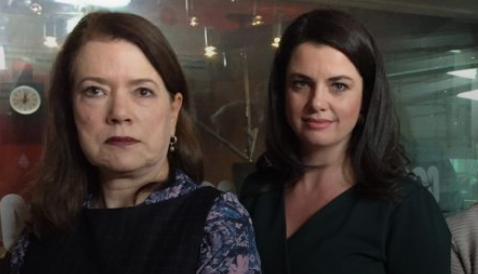 Well here is a curious thing: visit the ABC website, use the search function to find the Monument/Dignan report and all you will get is the result reproduced above this post: “Sorry, page not found”. The ABC, which devoted the entire 7.30 show to “the swimmers” and their allegations, has scratched the report from its public archives. For those interested, the transcript remains available as an evidentiary submission before ACMA, which concluded after receiving two complaints that 7.30 was innocent of bias because it had extended a right of reply to Pell while also offering the pro forma advice that he was entitled to the presumption of innocence.

Not by Victoria Police, however, which also charged Pell with having let his hands roam over Monument and Dignan in 1978. That prosecution was subsequently dismissed.

At the committal hearing for the case in March 2018, Detective Christopher Reed admitted he didn’t bother taking statements from “nuns, choir members and other church officials which he told the court were favourable to Cardinal Pell.” He also failed to obtain the exact dates the Cardinal presided at Mass in 1996. Asked why, under cross-examination by Robert Richter QC, Reed admitted that he executed a warrant at the wrong address. “I didn’t know where the archives were,” he said. It is a concern when a detective in a case of this magnitude doesn’t have the skill set of a Domino’s delivery driver.

CL’s rumination was inspired by the news, noted by Essential Reading earlier this week, that two women employed at St Patrick’s were never interviewed by police. They worked mere metres from the sacristy where, in the space of six short minutes, two choirboys are alleged to have been ravaged by a bishop in full Mass regalia. Currency Lad continues:

From the start, VicPol’s decisions about whose statements to heed, whose to avoid, who to pursue and who to disregard have been peculiar; some would say suspicious. Remember “the swimmers”? They were the public prosecutor’s B Team. If the “choirboys” failed, the swimmers would be beckoned forth from the red-brick shed of times gone by to regale a second jury with tales of surreptitiously brushed buttocks and sneakily squeezed privates beneath warm waves of sun-drenched, chlorine-flavoured play contemporaneous with the last Shah of Iran.

There were, of course, no corroborating witnesses for this malarkey but there were many exculpatory witnesses. Alas for the pool accusers, their case was thrown out by County Court chief judge Peter Kidd in February.

As to the absolute impossibility of the sacristy attacks ever having taken place, Keith Windschuttle’s forensic examinations of the holes in the prosecution’s case constitute a damning j’accuse:

Contradictions of the Choirboy

‘This Hiatus, This Gap’

Double Standards in the Court of Appeal

The second jury wasn’t troubled by such inconsistencies, but those Australians who care about justice, the conduct of Victoria Police, the ABC’s prejudicial bias and the fate of an innocent man certainly should be.

An eye for ‘serious journalism’

Leaving it all behind