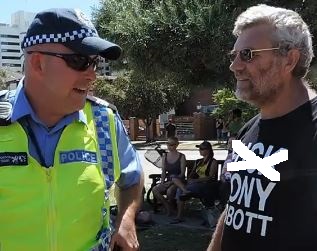 In this modern world of exquisitely delicate sensibilities, a realm where glancing at one’s watch can be construed as misogyny, have you ever wondered how it is possible for the feral left to roam the streets with a gross, block-lettered obscenity emblazoned on its collective chest and not face legal sanction?

We have seen them regularly of late, those ‘F@#$ Abbott’  T-shirts, which were produced within days of the last election by columnist Clementine Ford and enthusiastically promoted by The Age and SMH. Perhaps Fairfax Media CEO Greg Hywood wears one to board meetings, which would be just fine, as they are conducted behind closed doors by consenting, like-minded  adults.

Someone at Fairfax — there must still be at least one adult employed by the company — subsequently ordered the promotion flushed down the memory hole, but it was too late by that stage. And too much for one Perth police officer, who actually enforces the law, as can be seen in the Facebook video at this link.

Why would Fairfax target its editorial offerings at the protesters in that video, rather than the scores of Facebook commenters applauding the policeman for his action? That is one question FXJ shareholders might like to ask.

Of broader interest, why are police officers in other jurisdictions turning a blind eye to such offensive behaviour?