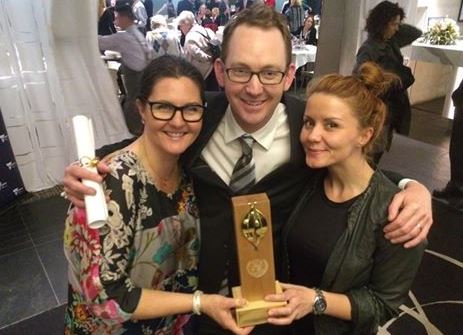 Congratulations to Adam Morton (above) of The Age for taking home the UN Association World Environment Day Award with his latest story about another of those sinking islands, the ones where wild seas are forever poised to slosh about the bedposts of innocent, blameless natives. You know the drill: as [as Joshua/Bongo/Ezekiel/insert colourful ethnic name here] wades neck-deep through the spot where once his yams were so happy, he wonders when the Western world will compensate him for the destruction of a tropical paradise. Inevitably it is a palm-fringed spot where everyone lived in peace and absolute contentment until Western capitalism’s CO2 ruined everything.

Morton has been on the beat for quite a while now, so it is entirely appropriate that he has at last secured an honour matching the worth of his journalism. Call it proof that perseverance pays off in the end. After scuttling Kiribati in 2009, Morton deep-sixed the Carterets, set sharks lose on the Seychelles  and, since 2008, has been afflicted by horror-show visions of the “climate refugees”  who will soon be surging this way and that all over the globe.

Read a little more widely about this latest “vanishing island” and, well, some might conclude the sooner it slips beneath the tide the better.

Morton’s report doesn’t mention what others have noticed about tiny Taro, in a remote corner of the Solomon Islands, but that is hardly surprising. When you’re hoping to be honoured by a UN body that harps tirelessly about climate change, the perils of climate change are apt to be your focus. The UN has long encouraged this sort of journalism with handsome prizes for reporting it finds congenial. Funny thing, though, it is only ever nice stories about the UN and its agendas that seem to draw accolades and cheques.

Consider how a certain Rosemary Apa has been overlooked. An environmental assessor, she compiled a recent report on Taro that strongly suggests CO2 is the least of the locals’ worries, as they have carpeted much of their Eden with household rubbish.

Or what of Anna Rios Wilks, who visited Taro two years ago to investigate the possibility of building a pig-powered methane digester that might have provided local women with cooking gas. Like Morton, she has an eye for water problems — though she comes at it from an entirely different angle. While he writes only of too much seawater, she notices that the island has so little fresh water that locals must bring it back in their boats. No award for Ms Wilks.

And certainly nothing by way of a mantelpiece geegaw for the UNICEF crew that visited Taro to ascertain islander attitudes toward sexual transmitted diseases. What the survey found was that incest is the island’s unofficial entertainment, more often than not consummated with violence. According to their interviews and focus groups, a jaw-dropping 68% of the younger male and female population experienced “forced sex”, a rate more than twice as high as other Solomons communities, and usually with an uncle.

Morton’s award-winning lament for Taro’s allegedly imminent disappearance somehow fails to mention the trash, drinking-water shortages and the islanders’ all-in-the-family depravity, all of which might be taken as entirely valid reasons to seek somewhere else to live. He does, however, dwell at length on the latest big floods of 2007, which were set in motion not by global warming but a tsunami generated by an earthquake.

“Sitting on the Supizae beach taking in this scene is as close to the romanticised vision of Pacific life as you are likely to find,” Morton writes by way of concluding his warmist’s postcard, which can be read in full via the link below.