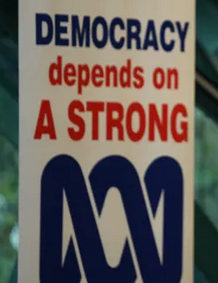 Who says the ABC doesn’t do comedy anymore?

Here’s an experiment, the result of which ABC viewers will know in advance: Switch the telly to the national broadcaster and count the seconds until the words “climate change” are uttered. If five minutes pass without mention being made, check your remote controller, as it won’t be the ABC you’re watching.

Yesterday, in the space of just 24 hours, the ABC promoted all the following catastropharian memes, as listed by its website search engine. Worth noting is that these results do not include, comperes’ incidental asides or the carbon phobia manifested by callers and guests.

The economics of climate change; the danger of coronaviruses; and getting ready to go back to school

The politics and future of the bushfires and the climate

Suspect the ABC has an agenda? It becomes much more than a suspicion when the ABC’s description of Finance Minister Mathias Cormann’s remarks at Davos, as broadcast on Radio National’s 8am news, are compared by The Australian‘s reporting of the same comments:

“Australia is represented a Davos by Senator Matthias Cormann. He told the gathering Australia accepted the climate change was responsible for Australia’s bushfires.”

Senator Cormann also stressed the huge size of the Australian continent and its history of extreme weather events in any global discussion of the bushfires.

“’Yes, climate change is making things worse … But we have also got to keep it in perspective. In a sense, Australia has always been a country that has suffered extreme weather events,” he said.”

If only the Morrison Cabinet included someone with ministerial responsibility for the ABC, something might be done. Rumours abound that such an individual has been sighted, but there is as yet no firm proof of his existence.