The ‘right’ to be a pest 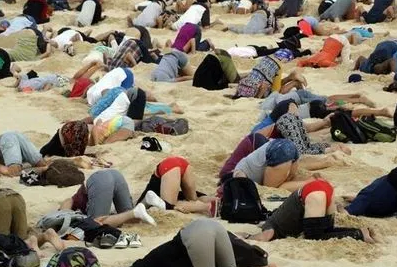 Nevertheless, this use of bail conditions against XR activists raises serious concerns, as citizens are threatened with jail if they insist on partaking in political activism.

The conditions appear to violate basic democratic rights, namely, freedom of opinion, movement and assembly, according to the International Covenant on Civil and Political Rights.

Blocking traffic, inconveniencing others, clogging the courts and burdening the police are “basic democratic rights”?

One wonders how Mr Moraro would react were, say, those who see universities as infested with pseuds and sophists to stage an unannounced invasion of his campus office, chain themselves to his bicycle and block his access to the lecture room and young minds he is shaping.

Some of those young minds were recently buried even deeper in darkness at Bondi Beach (above).

That must be more of the “political activism” Mr Moraro and The Conversation lionise.