The blinkered eye of
Eric Hobsbawm 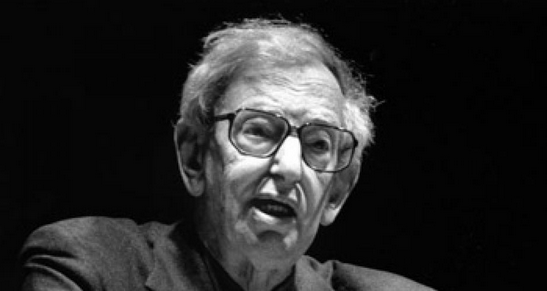 At The Tablet, a site well worth bookmarking, Adam Kirsch reviews Richard Evans’ Eric Hobsbawm: A Life in History, a biography of the Marxist historian which also attracts the attention of Quadrant‘s William D. Rubinstein in our May edition.

… Unlike the repentant ex-communists he despised, Hobsbawm never gave up the barbaric doctrine that the end justifies the means.

This core conviction of the essential goodness of communism colors Hobsbawm’s interpretation of key moments in modern history, particularly when the Soviet Union is involved. When he comes to write about the Russian Revolution in The Age of Extremes, for instance, Hobsbawm romantically praises communist revolutionaries, who were responsible for untold amounts of suffering and death, as “the necessarily ruthless and disciplined army of human emancipation.” He chastises England and France for appeasing Hitler at Munich, but barely mentions Stalin’s alliance with Hitler to divide Poland between them. And he blames the origin of the Cold War, not on Stalin’s actual aggression in Eastern Europe, but on a putative American attempt to “turn an exhausted and impoverished USSR into yet another client region of the U.S. economy.” Hobsbawm’s history may be legitimate left-wing interpretation rather than culpable communist propaganda, but clearly the line is a thin one.

Quadrant‘s Rubinstein offers an explanation for the inconsistency of an otherwise great mind.

There are many mysteries about Eric Hobsbawm’s life and beliefs, but the most obvious one is: how on earth a man of his commanding intellect, consistent originality and international perspective could, decade after decade, sublimate these qualities to slavish support for Joseph Stalin, a crude mass-murdering dictator, to his even more mediocre successors, and to the even dimmer leadership of the British Communist Party. Broadly, of course, this was because Hobsbawm came of age in the 1930s, the “devil’s decade” of fascism and mass unemployment. But so did many others, most of whom later repented of their folly.

At the heart of Hobsbawm’s belief system, in my opinion, was his relationship with his Jewish background—or rather, the black hole which defined this relationship. He was in Berlin in 1933 on the day Hitler came to power; several members of his family perished in the Holocaust. Hobsbawm later admitted that he was intellectually unable to confront the Holocaust. When the American historian Arno Mayer sent him the typescript of a book on the exterminations, Hobsbawm wrote back: “Since the first material on the camps came out in the early fifties or late forties, I have kept away from it … I have found it too difficult to face emotionally.” A French publisher who is Jewish declined to publish a translation of The Age of Extremes because it barely mentioned the Holocaust, discussing it in perhaps eight or ten lines, much less than the space that Hobsbawm gave to the Dadaist movement in modern art; Auschwitz was not mentioned at all.

Rubinstein’s review will be liberated from behind our paywall later in the month. In the meantime, subscribers can read it here.